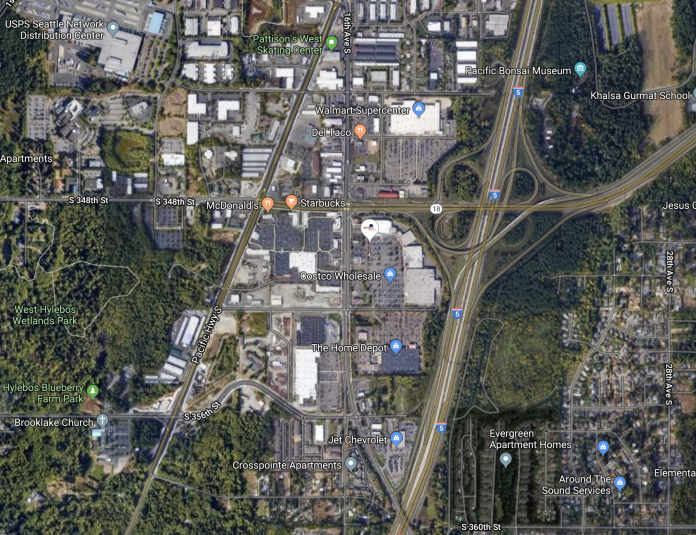 Federal Way is working through the initial stages of a subarea planning process in the southern portion of the city. The “City South” area, which is just southwest of I-5/SR-18 interchange, is largely a big box retail and suburban strip commercial area. That could change in the years ahead, but Federal Way is taking a first step to this by seeking feedback on community priorities. This will information will be used to establish a general vision for the area, which could simply mean expanding the status quo land use or moving toward development of a mixed-use, transit-oriented district.

Through the Framing City South subarea planning process, planners will issue a summary report on what the community vision is and then determine how to proceed in realizing it. That could culminate in updated policies, zoning changes, and enhanced development regulations.

City South is hemmed in by I-5 on east and centered on Pacific Highway and Enchanted Parkway between S 344th St and S 359th St. Although a bit of hodgepodge of strip, the area is well known for anchor retailers like Costco, Home Depot, and Lowe’s Home Improvement. The area also has a variety of other commercial services, storage, fast-food restaurants, and a limited amount of housing (mostly apartments) that is situated on the south end.

The City South area is slated to get a Link light rail station in 2030. The preferred station location would be situated at Enchanted Parkway and S 352nd St. However, an alternative station location further south, next to I-5 between S 356th St and Enchanted Parkway, is also being considered. Unfortunately, the Washington State Department of Transportation (WSDOT) has a conflicting proposal to build another off-ramp from I-5 at S 356th St, which could be completed by 2027. This will have the regrettable and considerable impact of reinforcing and further inducing the auto-dominated nature of the area.

Planners want to know, however, what people hope to see in the future at City South. The visioning process is so far relatively open-ended, but to get people thinking about options, planners have suggested four broad approaches to consider: a suburban-style retail and commercial area, a mixed-use residential neighborhood, a compact mixed-use district, or an urban-style retail and commercial center. The characteristics of these four alternatives offered by planners are fairly distinct:

With this in mind, the public can provide feedback on the high-level priorities for City South and a particular development approach via Federal Way’s online open house; the online open house and survey are open through December 15th. Federal Way planners hope to provide another online open house this winter (likely January) to highlight themes and issues they heard and seek confirmation on a vision direction before finalizing a vision report for the subarea in the spring. At that point, the city will share information on the report and determine next steps.