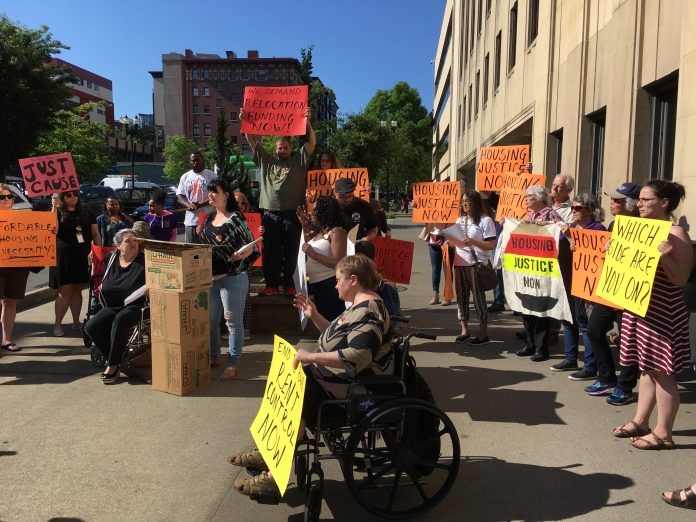 Wonkabout Washington is back after a brief hiatus and we’re wrapping up the year with an exceptionally wonky topic that has broad impacts for land use law and tenant rights regulations across Washington. That’s right, we’re talking this month about takings law and a hugely consequential recent ruling by the Washington State Supreme Court!

A taking? What do you mean?

A taking is defined in the takings clause of the United States Constitution in the Fifth Amendment: “[N]or shall private property be taken for public use, without just compensation.” (U.S. CONST, amend.) Takings are further defined in the Washington State Constitution: “No private property shall be taken or damaged for public or private use without just compensation having been first made.” (WASH. CONST, art. 1, § 16.)

In November, the Wahshington Supreme Court, Washington State’s highest court, ruled in favor of the City of Seattle on a lawsuit (Chong Yim v. City of Seattle) brought by the Pacific Legal Foundation on the First In Time rental regulation that requires landlords to accept the first qualified applicant for a rental property. In a win for renters in Seattle, the state supreme court upheld the First In Time rule. And in a surprise to tenant advocates, land use nerds, and environmentalists across the state, the unanimous decision upended years of case law on takings by clarifying the legal framework for takings law in Washington and throwing out dozens of previous rulings on takings.

Previously, the legal framework around takings in Washington had been extremely murky. The federal government has clearer rules on takings that require compensation.

For example, in most situations compensation is required for a physical occupation (e.g., using a private property for development of a public road) or regulations that deprive owners of “all beneficial use” of the property. Where these rules are not violated, compensation is also available if the Penn Central factors indicate that a “takings” as occurred. The Penn Central factors consider the regulation’s economic effect on the land owner, the extent to which the regulation interferes with reasonable investment-backed expectations, and the character of the government’s action. Penn Central Transp. Co. v. New York City, 438 U.S. 104 (1978). Conditions of approval requiring the dedication of land or the payment of money may also be takings if there is no connection between the government’s legitimate interest and the condition or condition is not roughly proportional to the impact of the proposed development.

But rulings in Washington courts have been inconsistent in applying the federal taking standards, leading to a hodgepodge of case law used to determine takings. For example, some Washington court decision had required that regulations impacting real property required greater scrutiny and must meet a higher standard for providing due process than other regulations.

A clear example of the disconnect between Washington takings standards and federal standards is the Manufactured Housing case, decided in 2000, that concerned the right of residents of a mobile home park to have the right of first refusal in purchasing the park in case of a sale by the owner. In that case, the State Supreme Court determined that a regulation that “destroys one or more of the fundamental attributes of ownership” constituted a taking. This interpretation adds another layer of limits to regulations, in addition to the federal standards. This ruling has generally inhibited attempts by city or state governments to pass other “right of first refusal” laws that would allow tenants to purchase their buildings or manufactured home parks from owners looking to sell.

But the Yim decision last month threw that case, as well as dozens of others, out when it comes to determining a taking (for a full list of the rejected cases, check out page 24 of the court ruling). Instead, the Washington State Supreme Court decided that the only applicable standard in Washington is the federal standards for takings. Futurewise wrote a friend of the court brief urging the state supreme court to clarify that Washington follows federal takings law and not the confusing and inconsistent rules adopted by Washington court decisions.

What does that mean for Washingtonians?

This new decision by the Court opens up the possibility of a variety of new regulations to protect people and our environment with less risk of legal challenge. On the tenant front, the City and State may be emboldened to return to the idea of right of first refusal legislation. When it comes to land use, the ruling may facilitate new legislation or regulations on a number of fronts. Notably, the Orca Task Force convened by Governor Jay Inslee recommended setting a new standard for habitat protection that ensures a net ecological gain. This new Supreme Court ruling could mean new habitat protections for streams, shorelines and the Puget Sound that protect our Southern Resident Orca population.

The Yim decision has already supported improved protections for Puget Sound. In the second week of December, the court of appeals, Washington’s second highest court, followed the Yim decision and concluded that the City of Bainbridge Island’s buffers that protect Puget Sound habitat and water quality were not regulatory takings.

Stay tuned in 2020 and beyond for new legislation and cases whether rental regulations, environmental regulations or land use decisions that take advantage of the new case law.