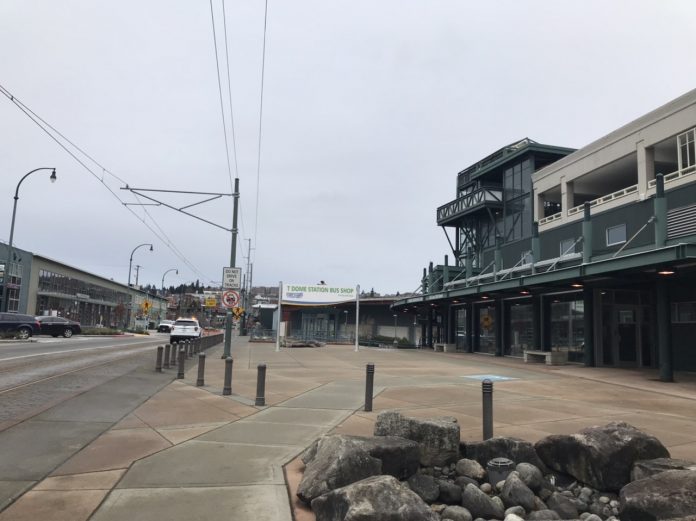 Pierce Transit has a vision of growth, but it will take a substantial amount of additional public investment to realize. A long-range plan update, as proposed, would put Pierce Transit to increase weekday ridership by 198% from 28,700 to 85,700 by 2040. This would be made possible by introducing three bus rapid transit lines, launching several new fixed bus routes, and increasing frequencies so that more routes benefit from 15-, 20-, and 30-minute service headways.

Pierce Transit has struggled in the past decade. The Great Recession devoured finances since the transit agency is heavily reliant on the sales tax. As a funding source, that type of tax is highly volatile to economic circumstances and based upon consumer purchasing. Demand for goods, particularly of high value, plummeted during the Great Recession in Pierce County. The transit agency also did not have a well-padded rainy-day fund to pull from to cover continued operational expenses.

The combined financial troubles of Pierce Transit led to massive service reductions after reaching a record high of about 660,000 annual service hours in 2008. The transit agency subsequently tried to obtain voter approval for new taxing authority to save and expand service. However, anti-tax activists led by the car sales lobby were successful in ensuring rejection of new taxes at the ballot box.

In order to create service efficiencies and consolidate bus service, Pierce Transit sought to reduce the geographic area of its Public Transportation Benefit Area (PTBA) in 2012. Cities like Bonney Lake, Buckley, and Sumner were taken out of the PTBA meaning that they would no longer be taxed but also would no longer benefit from bus service, limited as it was.

Revenue growth in the sales tax for Pierce Transit is relatively healthy. Projections indicate that it will grow about 5% over last year. Of course, inflation and operating costs may wind up eating away at much of that revenue growth. Still, rapid growth in tax receipts is a positive thing in advancing eventual service growth.

Pierce Transit has charted out what all of this new service might look like by corridor and frequency. A grid of 15-minute or better frequency at peak would begin to form across central Tacoma as well as South Tacoma, Lakewood, Midland, Parkland, Spanaway, Summit, and South Hill. Peak frequencies of 30 minutes or better would be much more widely offered across Tacoma, University Place, Puyallup, Lakewood, and unincorporated areas in between.

Eventually though, Pierce Transit would like to roll out bus rapid transit (BRT) across its service area. Route 1 is already well into the development process and should launch as a bus rapid transit line in 2022, serving communities between Downtown Tacoma and Spanaway. Four other corridors, however, are proposed in the long-range plan update. These include:

The latter routing is an odd but interesting choice, but may be indicative of Pierce County’s hopes to eventually gain the region’s second or third major commercial passenger airport.

Expansion of the Tacoma streetcar, regional light rail, and commuter rail should help improve transit access and service during the planning horizon. It stands to reason that Pierce Transit will be able to overhaul some of the local bus network to benefit from those investments by connecting and feeding into them rather than duplicating them. Although, the BRT 3 corridor proposed seems to make the mistake of covering the same corridor as the Tacoma streetcar extension planned to Tacoma Community College by 2039. A better investment may be helping Sound Transit in financing that streetcar extension for an earlier opening or focusing on the southern portion of the corridor.

Not clear in the updated long-range plan, however, is whether or not the service area and taxing district might expand during the 2040 planning horizon. There are real tradeoffs in doing so. Cost of operational service to some of the further out communities is higher with lower rates of transit ridership. Voting trends of those communities have shown that many residents are reticent to support basic public services like transit, which is a risk to creating a more nimble and expanding transit network. However, expanding transit service to provide better access to opportunity for lower-income households, improve local economic vitality, and reduce congestion and carbon emissions are all important considerations in enlarging the service area.

Whatever the case, expanding Pierce Transit service would be greatly welcome to Pierce County where local transit service is anemic. Increases in new service have largely been on the margins with little opportunity for further growth short of buoying revenues to aid expansion. The updated plan shows the way as a strategic increase in revenues can unleash service that nearly triples ridership for a relatively small price.