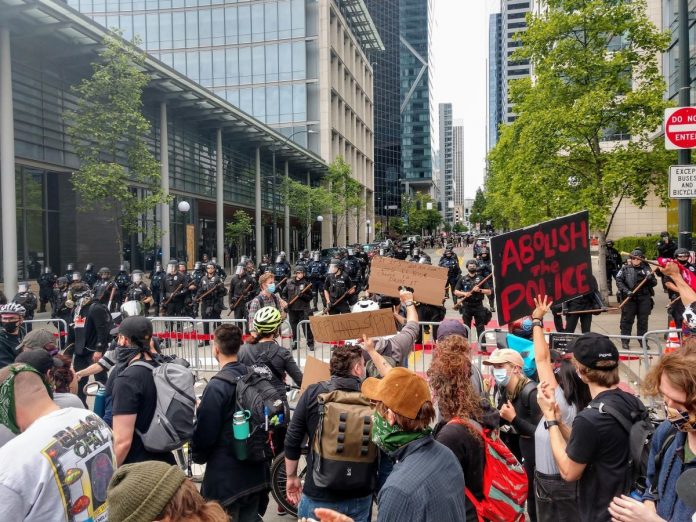 The sixth day of Black Lives Matter protests felt like a turning point and perhaps even a moment of catharsis–while activists acknowledged the work ahead to convert energy into policy.

The crescendo came when Nikkita Oliver emerged from City Hall to address the throngs of supporters from the 4th Avenue steps after meeting with the Mayor inside to deliver their demands. (You can watch that meeting because Oliver demanded they livestream proceedings as a condition of participating.)

“You had to’ve seen how the MC/crowd on ‘Showtime at the Apollo’ treated flunkies on amateur night to fully appreciate what Nikkita did to Mayor Durkan today,” Shaun Scott tweeted.

Oliver brought out Mayor Jenny Durkan to address the crowd and the interaction was much different than the previous day when two self-appointed protest leaders of murky credentials sought to quiet the crowd and appease the Mayor like chaperones on a field trip. Sharpened by years in the struggle, Oliver took a different approach: she held the Mayor’s feet to the fire.

The Mayor attempted to deflect focus from Seattle Police Department (SPD) and minimize misconduct, but Oliver kept redirecting her to the community demands around which the march had been organized.

The Mayor did offer some more favorable rhetoric, and later in the day she lifted curfew and pretended that she never wanted to lift the consent decree despite declaring SPD “transformed” earlier this year.

However, Mayor Durkan stopped short of promising action, saying “we can’t change things overnight” even when referring to the practice of police officers wearing mourning badges that obscure officer identification. This is something that absolutely can change overnight if the Mayor orders and enforces it. Instead, many officers took to covering both their badge numbers and name tags, making matters worse. Charles Mudede said it best: “What utter rubbish… Enough of this creepy deification of police work. Make it as banal as possible. And stop killing black people.”

Beyond their three broad demands, protesters were seeking an end to gaslighting, acknowledgment that SPD had done wrong, and an order to end immediately the tear gassing, pepper-spraying, and flash-banging of peaceful protesters. Like the day before, the Mayor wouldn’t make a promise. Nonetheless, protesters were not tear-gassed last night for the first time since Saturday.

That said, some protesters — after apparently hearing chatter on police scanners — fear that SPD is prepared to deploy sound cannons (long-range acoustic devices or LRADs with the ability to literally deafen people if used at full strength) if needed so they can disperse crowds in a different, but still dangerous and dehumanizing fashion. That hasn’t yet thankfully.

Erica C. Barnett, writing for the South Seattle Emerald, did an excellent job of breaking down how many demands still went unmet.

No, Mayor Jenny Durkan and Seattle’s police chief, Carmen Best, hadn’t budged on their commitment to a version of the protests in which a few “bad people” throw objects at police, forcing them to deploy chemical weapons indiscriminately against large crowds. If anything, the list of projectiles that the police claim have been deployed against them only grew throughout the day and now includes urine, feces, “cans of food” and a fire extinguisher.

No, the mayor and police chief have not backed down from their contention that asking officers to remove “mourning bands” that conceal their badge numbers is something that “can’t happen overnight.” Asked about widespread calls to end the practice, Best responded, “we’re not going to do that right today,” but said SPD would come up with some way to make badge numbers visible in due time. During the meeting and throughout the day, Best herself wore a mourning band in the center of her badge, sending what could be seen as a message of solidarity to officers who continue to wear them during the protests.

And no, they wouldn’t commit to stop using tear gas and other chemical weapons against protesters or to try to focus their attention on the handful of people who are causing trouble.

The Seattle Community Police Commission (CPC) told Mayor Durkan to stop deflecting and lying to their face at their meeting Wednesday. “We have to bring it back to Seattle and what’s happening in the last five days,” Rev. Harriett Walden said.

“28 people killed since the consent decree, and two last month,” CPC commissioner Joseph Seia said. “It’s easy to condemn others that are killed in other cities, but the lack of action to condemn the violence that has come out of the Seattle Police Department is disgusting.”

While protester demands aren’t being met as of yet, the tide may be turning. The different posture of the Mayor is something, but more important seven of nine Seattle City Councilmembers have backed the protesters. Councilmember Dan Strauss, who represents District 6 in Northwest Seattle, joined the chorus against police brutality and in favor of reform, calling for an end to the curfew and demanding. “STOP using military grade weapons against our residents,” he wrote.

Even Councilmember Alex Pedersen, the most conservative voice on the city council, seems to be listening, as he reached out to his former opponent Shaun Scott to learn about police accountability measures. (Incidentally, Scott is our monthly meetup guest this month, so mark your calendar for Tuesday, June 9th.)

We are in a moment of national consciousness-raising around racism and police brutality. I will not pretend to be neutral. We cannot let this moment slip by, with attention never more focused on these topics in my lifetime.

Call your Councilmembers. Email your Seattle City Councilmembers. Email the Mayor. Donate to the BIPOC organizations. Sign Covid Mutual Aid’s petition if you’re ready to defund the police. Step into the gap and protest if you are able — protests are planned in the Central District and Rainier Beach over the weekend, so watch for details. Talk to your friends. White silence is violence. Don’t be part of the problem.