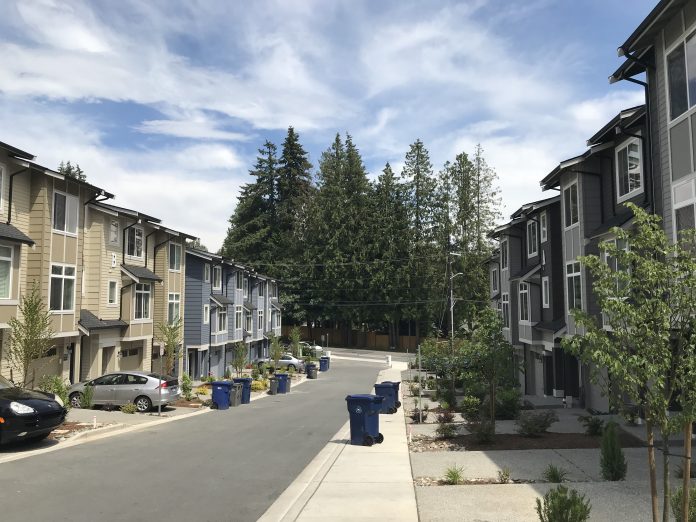 Land use reform in Snohomish County could bring increased lot coverage to multifamily and commercial zones in unincorporated urban growth areas. Increasing the development standards in those zones would enable more housing to be built in areas of the county that have been in particularly high demand in the past decade. County planners principally hope that the code amendments will solve lot coverage mismatches between zoning types, allow more flexible building and site design, and help development proposals reasonably achieve allowed zoning densities. Under a proposal endorsed by the planning commission in the fall, the county would raise lot coverage allowances on some 3,367 acres of land to levels found in similar zones of nearby jurisdictions.

Lot coverage is a common bulk regulation found in development codes. It is typically used in residential zones to control how much area of a lot may be covered by structures. When paired with setbacks and height limits, lot coverage can be a powerful form of control on how much effective buildable square footage is possible on a centrally located portion of a lot. This can lead to the relatively uniform building patterns found in suburban areas.

There is some misconception that lot coverage is meant to facilitate better on-site drainage and stormwater management. Snohomish County and all local jurisdictions are subject to state quality standards under the Clean Water Act, which require adoption of a locally-adapted stormwater manual consistent with state requirements. New development is then subject to those on-site stormwater control and management standards with a priority for low-impact development techniques like rain gardens and permeable pavement.

Higher lot coverage does not necessarily preclude the aforementioned techniques, but more often than not local soils may make some infeasible or of low benefit. Larger new developments may use on-site vaults or open detention ponds and connect to public drainage systems to manage stormwater. Ultimately, all development is required to show how stormwater will be managed and that almost always means better local conditions as a result of higher quality stormwater systems and water treatment. Increasing lot coverage has no bearing on ultimate performance demanded by the stormwater manuals.

Zones that would get lot coverage boosts include the Townhouse (T), Low Density Multiple Residential (LDMR), Multiple Residential (MR), Neighborhood Commercial (NB), Planned Business Commercial (PBC), Community Business (CB), and General Commercial (GC) zones. Generally, lot coverage would use a uniform 50% maximum in these zones for residential development, raising from lot coverage maximums of 30% to 40%. For planned residential developments (PRDs) in LDMR and MR zones, the maximum would be raised for multifamily projects to 55% consistent with single-family and townhouse development using the PRD process; currently, the maximum is 40% for multifamily PRDs. The proposed changes, however, would not affect cottage housing projects and projects using lot size averaging subdivision provisions or special development bonuses in a segment of the SR-99 corridor.

The bulk of the lot coverage increases would occur in MR and commercial zones (1,773 acres) with the remainder mostly in the LDMR zone (1,564 acres), though a small sliver would also happen in the mostly-built out T zone (30.6 acres). The principal differences between LDMR and MR zones are the permitted level of unit density and setbacks. Things like height and uses are in common between the zones with only a modest difference in lot coverage maximums.

In a staff report, Janet Wright explained that the current LDMR lot coverage maximum is unique and inexplicably lower than lower-density residential zones. “In particular, the 30% standard lot coverage for the LDMR zone is lower than that for other urban residential zones and is viewed as the most restrictive, although there is support to adjust lot coverage regulations for other zones to promote infill development and allow sufficient flexibility,” she wrote. “Staff research found that the LDMR zone and its 30% standard lot coverage was established on July 15, 1968 and that there were no associated findings regarding the establishment of this standard.”

During the briefing, Janet Wright said that in terms of future annexation of urban unincorporated areas, increasing the lot coverage maximums in the select zones could bring more harmony of development patterns with the cities that are poised to annex the areas. She also pointed to how the proposed changes in LDMR and MR zones were particularly similar to existing lot coverage standards in comparable zones of nearby jurisdictions. Arguably, the LDMR changes could be seen as slightly higher than the average she explained, but not by much.

But Councilmember Stephanie Wright (D-District 3) pushed back on the lot coverage comparison numbers Janet Wright was describing. “I don’t mind realigning, and for me, it looks like my surrounding cities are kind of 40% on the most part, but I’m uncomfortable leapfrogging them,” Councilmember Wright said. Nearby cities she was referencing were Lynnwood and Mukilteo that fall within her district. Councilmember Wright also said that staff working with nearby cities should happen first to ensure that the proposal lines up with city development regulations, both existing or proposed regulations.

It bears mentioning, however, that Councilmember Wright has expressed similar views in the past over proposals where development standards would be changed in unincorporated urban growth areas in her council district. A prime example of this was when the county embarked on a process to increase density and building heights in multifamily and commercial areas west of I-5 in 2015. The county council held six public hearings on the matter with Councilmember Wright ultimately putting the legislation in a deadlock and sending the topic back to the planning commission, suggesting that it be focused on “transit corridors” like SR-99. Coincidently, two years later Edmonds adopted an urban district plan along SR-99 in 2017 to facilitate denser developments in what is Councilmember Wright’s district.

A similar proposal came back to the county council in 2018 at the behest of former Councilmember Brian Sullivan (D-District 2), but with changes to focus density and building height increases on SR-99 and excluding Councilmember Wright’s district. An amendment adopted also excluded some areas east of the highway from the development capacity increases over fallacious water quality concerns. Despite this, Councilmember Wright still opted to vote against the legislation even though it had the votes to pass.

Councilmember Megan Dunn (D-District 2) toured back to the LDMR zone’s 30% lot coverage maximum, wondering how it was chosen. She noted that the maximum was established in a time when the county did not have minimum tree canopy requirements, but it does now for urban residential development. Janet Wright reiterated that there were never any findings for the requirement, but that lot coverage was used as a building form control and that overtime those controls have evolved to include setbacks, height, and modulation requirements. She also added that drainage codes have really come a long way in dealing with on-site stormwater and promoting greener techniques.

Yorik Stevens-Wajda, a county council legislative analyst, jumped in to point out that a project would still need to meet the minimum tree canopy regulations. So if a project proponent were trying to maximize lot coverage but could not meet the minimum tree canopy requirements with a site design, it would need to be redesigned to meet the requirements. He also emphasized that lot coverage only addresses building coverage, not all impervious surfaces that may be on a lot like decks, patios, driveways, and pedestrian walkways. His point in this was that lot coverage should not be confused as an actual tool of managing stormwater.

Whether or not the legislation passes as recommended remains to be seen, but comparable jurisdictions like Clark County, Nevada and Los Angeles County do not even have universal lot coverage limitations for similar zones. Anyone familiar with those areas knows that developers are not usually seeking to do 60%, 70%, or even 80% lot coverage in most suburban medium density residential areas. So, it is an open question as to what level of lot coverage most developers in the Snohomish County region would even pursue if the lid were taken off altogether rather than only set to a modest 50%. Ultimately, marketing and return on investment of a development is what drives site utilization by most developers, but a higher lot coverage would ensure that more projects fully use allowed zoning densities.

The next step in the process for these code amendments is a public hearing scheduled for March 3rd, which could involve final action for approval. Other land use reform legislation that could be headed to the county council soon is a proposal to encourage more accessory dwelling units in the county, particularly in urban areas, and farm worker housing on agricultural lands.