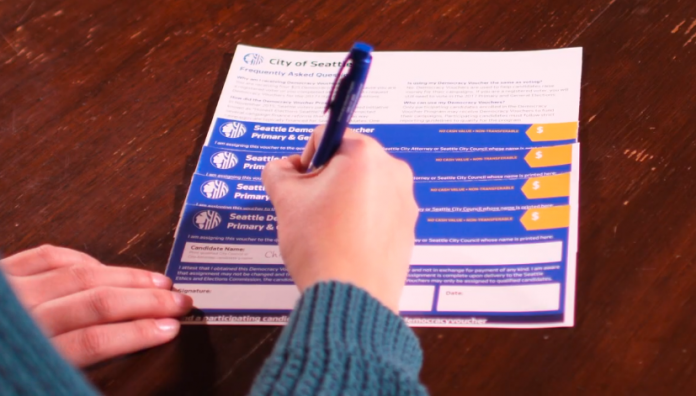 Seattle’s unique Democracy Voucher program provides registered voters with four $25 vouchers to donate to eligible candidates. The program has successfully flooded city elections with small, publicly-funded donations that have reduced the influence of powerful donors while giving residents unprecedented freedom to support their preferred campaigns. Interestingly, many Seattleites that have contributed to candidates using the Democracy Voucher program have also donated vouchers to opposing candidates running for the same position. This behavior may seem strange, but it likely reflects voters’ complicated and overlapping candidate preferences.

The interactive chart below shows Democracy Voucher contributions to eligible candidates as of March 19th. Each circle represents a campaign, and the circle sizes are directly proportional to the number of vouchers assigned to that campaign. The lines connecting the circles vary in thickness to represent the number of shared individual donors each candidate has with every other candidate.

Network Graph of Democracy Voucher Donations as of March 19th. Hover your mouse over the nodes (circles) and links (lines) to view more details. Drag the nodes to rearrange the network. Note that the data displayed in the graph show vouchers that have been allocated by Seattle residents and they may not have been reviewed, accepted, or redeemed. Also, many candidates have only recently declared or have not yet declared their candidacies and will likely have more vouchers soon.

The visualization above displays how support for different candidates has overlapped so far. As one might expect, Councilmember Teresa Mosqueda, running to maintain her citywide Council District 8 seat, shares a large number of donors with mayoral candidate and current Council President M. Lorena González, who has endorsed Mosqueda (760 total). But, strangely, González has had even more voucher donors in common with one of her mayoral race opponents, Colleen Echohawk (882 total). In fact, a slight majority (1,145 of 2,030 or 56.4%) of González’s Democracy Voucher donors to date have also donated to at least one other opposing mayoral candidate.

The top three current Democracy Voucher fundraisers, Colleen Echohawk, Andrew Grant Houston, and Lorena González, all competing for the same mayoral election, presently share 238 common donors who donated at least one of their Democracy Vouchers to all three campaigns. Overall, 5,958 donors assigned one or more voucher to a mayoral candidate, and 1,602 (26.8%) donated vouchers to at least two opposing candidates.

This behavior may be baffling to some political campaigns. They may think that donors are confused. Why would they effectively cancel out their donation to one politician by donating to another competing politician? Large corporations, such as Comcast, often contribute large donations to opposing candidates so they can influence law and policy regardless of who wins. But nobody is buying a local official for a few $25 Democracy Vouchers. So what gives?

As a voter, I think voucher splitting can make sense. In the last mayoral race, for example, I would have been happy to have candidate A or candidate B win, just as long as candidate C didn’t. In most races, I have a preferred candidate, other candidates who I may also support, and others who I don’t. With Democracy Vouchers, we have the power and freedom to support whoever we want.

Ranked-choice voting, a system that allows individuals to vote for multiple candidates based on their order of preference, would give us similar freedom to vote for who we want, in the order we want. We would have the freedom to vote for a preferred outsider candidate without fear of “throwing our vote away” and avoid “vote splitting” with similar candidates who we might also support.

Similar to what we see in the network graph above, ranked-choice voting allows citizens to voice their complex and often overlapping preferences for different political campaigns in ways that have shown to increase representation among female candidates and candidates of color. It is “the most promising reform to democratize and depolarize our politics,” according to Larry Diamond, former director of Stanford’s Center on Democracy, Development, and the Rule of Law.

Together, Democracy Vouchers and ranked-choice voting could dramatically improve elections nationwide. These systems underscore that our officials are selected by coalitions of people, not corporations, who come together to freely pick their preferred leaders. 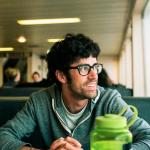 Harry was born in New York, went to college in Iowa, and kept moving West to Seattle where he’s stayed since 2016. For his day job, he is a data analyst at Big WaterConsulting and in his free time he is a volunteer organizer with the Transit RidersUnion, which is a member of Washington For Equitable Representation, a coalition of 25+ organizations working to ensure fair representation in our elected bodies through ranked-choice voting.