Amidst the fallout of the coronavirus pandemic, interest in passenger rail has increased markedly across the United States. With an enthusiastically pro-rail federal administration now in power, talk of our nation’s “second great railroading revolution” has begun among advocates and transit blogs from coast to coast. But is this only our second, or even third, attempt at such a revolution? What about the one that started in the Pacific Northwest about 30 years ago, the one that aimed to create the most advanced rail system in North America?

It was the early 1990s, and change was afoot in Western Washington. Many parts of the region were still recovering from the last recession in the 1980s, in addition to earlier declines of Boeing’s space program and the logging industry. Bellevue and Redmond were feeling the impacts of Microsoft’s meteoric rise. Amazon didn’t even exist yet, but Washington’s leaders were taking proactive steps to accommodate major economic and population growth. There was a new awareness of the environmental pollution caused by car dependence and the impossibility of “building our way out of ” congestion with more highway lanes.

The state was steadily easing its way into implementing the 1990 Growth Management Act and several Commute Trip Reduction provisions, all to mitigate the impacts of a projected population boom in the Puget Sound. In 1991, the Washington State Legislature directed that a comprehensive assessment be made of the feasibility of developing a statewide ‘High Speed Ground Transportation’ (HSGT) system. The next year, the Federal Railroad Administration (FRA) designated the Pacific Northwest Rail Corridor, which runs through the heart of Seattle, as a high-speed rail (HSR) corridor.

With the results of the earlier HSGT study in, the 1993 Washington State Legislature passed Chapter 47.79 RCW and created something revolutionary: a goal to build a regional HSR network connecting Seattle with Portland, Vancouver, British Columbia, and Spokane by 2030. As recommended by the study, Washington and Oregon began implementing modern intercity passenger rail service on existing tracks between Vancouver and Eugene, Oregon, with the goal of increasing this service’s top speed to 110 mph. From this came Amtrak Cascades, one of the nation’s most successful intercity passenger rail services. Following the study’s vision, the Washington State and Oregon Departments of Transportation both created bold long-range plans for Cascades that would dramatically increase the line’s frequency and usefulness. Washington also studied the idea of using existing tracks to provide convenient intercity train service between Seattle and Spokane via the Yakima Valley and the Tri-Cities.

But something happened along the way. Progress on the vision of world-class rail in Washington slowed during the early 2000s. With the exception of some improvements made thanks to funding from the American Recovery and Reinvestment Act and the upcoming opening of the Point Defiance Bypass, Amtrak Cascades has not seen significant expansion since 2006. A 2001 study of daytime East-West passenger rail service went almost 20 years without the necessary follow-up, largely due to revenue losses stemming from Initiative 695 (a 1999 statewide initiative that cut Washington vehicle registration fees). Efforts to get HSR moving again have begun in earnest with faster travel times and a different project name: ‘Ultra-High-Speed Ground Transportation’ (UHSGT; since this is a local term, I will continue to refer to this new project iteration as simply ‘HSR’). But at this point, HSR will come too late to respond meaningfully to our climate and housing crises; and its lack of interim connectivity improvements (especially for Central and Eastern Washington) calls the current project’s motivations and political practicality into question.

What’s missing? Where do we go from here? There are three important features that the Northwest HSR project must include in order to respond to today’s demands: a robust intercity passenger rail network, a stronger emphasis on equity, and faster climate and environmental action.

Here are the top ten countries with the most advanced HSR systems, rated in terms of operational top speeds and route mileage:

Spread across the world, with differing geographies, economies, and political systems, these countries don’t have much in common. Even when it comes to their rail transportation systems there are different lessons to be learned from each one. But there is one thing they do share: excluding only Saudi Arabia, every country on this list had existing intercity passenger rail networks before HSR, with very frequent schedules along busy travel routes.

The biggest problem with the Northwest HSR implementation approach is that it hasn’t remembered this simple lesson: without a solid foundation of local and regional passenger rail services, HSR will have a hard time succeeding.

Communities lacking good local rail and transit services, particularly those in the Yakima Valley and Eastern Washington, are unlikely to support a Seattle-centric north-south HSR line at the polls. Even enthusiastic supporters in small towns along the I-5 corridor may choose not to ride HSR if they have difficulty getting to stations without long drives to metropolitan centers. With the right infrastructure upgrades, Amtrak Cascades can become competitive with flying and driving between many places and building the train-riding culture necessary for HSR to be economically and financially feasible. This is why Washington state rail plans and studies dating back over three decades have all recommended incremental yet consistent investment in existing rail corridors and services before the development of HSR, including the 1992 HSGT study and the 2006 Long-Range Plan for Amtrak Cascades.

The economic and social effects of HSR are varied. Thus, it is important to understand those circumstances in which HSR helps with equity or accessibility and those where other solutions are needed. Places like Japan and France are not more equitable or accessible simply because of the Shinkansen or TGV lines between their major cities. These top-tier HSR services are the flagships of nationwide mobility ecosystems that include conventional intercity and commuter trains; metro systems; bus networks; high-quality pedestrian and cycling infrastructure; and urban design patterns that are economically efficient and can connect all of these things together effectively.

The Northwest HSR project is often talked about as an equalizer, and in certain respects it is. But if improving equity and access across Washington are our top priorities, we cannot forget the roles of regional and local public transportation systems, active transportation like cycling and walking, and transit-oriented land development. HSR is unlikely to be an ideal option for daily work commuters and those with limited transportation options because HSR fares are assumed to be 52 cents per mile, as opposed to a 19-26 cents per mile average for Amtrak Cascades and a 10 cents per mile average for Sounder commuter rail. If it fails to include investment in more affordable transportation alternatives across the entire state, the HSR project may not contribute meaningfully toward its core values of equity and economic inclusion.

Acting Quickly on the Environment and Climate

A report from the Intergovernmental Panel on Climate Change claims that a 45% drop in global carbon dioxide emissions (relative to 2010 levels) by 2030 is necessary to prevent irreversible climate damage. As of 2018, the largest contributor to America’s greenhouse gas emissions is the transportation sector, at 28%. Of that, 82% of the sector’s greenhouse gas emissions are from road vehicles; another 9% from aircraft, and just 2% from rail. A major mode shift from highways and air to rail is perhaps the fastest and most effective way to reduce the overall emissions of America’s transportation system.

With a planning horizon of no less than 20 years, Northwest HSR will not be able to contribute to needed carbon dioxide reductions by 2030. When it does open, HSR’s pricing will make it a strong competitor with air travel, but not necessarily with driving. Thus, in order to reduce emissions as quickly as possible, Washington needs to invest in its existing rail system and shift as much freight and passenger traffic to rail as possible. This includes upgrading Amtrak Cascades to maximize its speed, capacity, and frequency as laid out in the previously mentioned studies.

It’s 2021, and once again Washington finds itself with mixed news and a bit of uncertainty. While Puget Sound’s economic and population growth has continued, the effects of climate change and a serious disconnection from the rest of the state threaten its prosperity. We have also fallen far behind in achieving our 1993 goals for a statewide HSR network. But Washington still has the chance to prove itself as a leader in doing rail the right way. We just need to think practically in the short term and focus on our most critical priorities in the long-term.

As we start to consider the financial and political feasibility of HSR, we must not forget the importance of investing in our region’s existing rail infrastructure and services over the next decade. For intercity passenger transportation, that means, at a minimum, implementing the 2006 Long-Range Plan for Amtrak Cascades and extending similar passenger rail services across the Cascade Range to Yakima, the Tri-Cities, and Spokane (a project which sees public approval of 76%). Once North-South and East-West intercity rail backbones have been established and a competitive market of rail and transit travelers has been created, Washingtonians on both sides of the Cascades Range will have reason to support the creation of Northwest HSR.

HSR is a worthwhile endeavor — we cannot afford to undermine it by failing to build out the statewide public transportation network and the coalition of supporters it needs to succeed.

A version of this article appeared in Speedlines, the newsletter of the American Public Transportation Association. 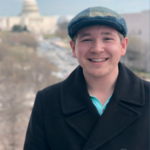 Patrick is co-executive director of All Aboard Washington, a statewide passenger rail advocacy organization. He is an experienced researcher, editor, and writer. He has a strong background in international travel and passenger rail advocacy, with a focus on economically and environmentally sustainable urban design.