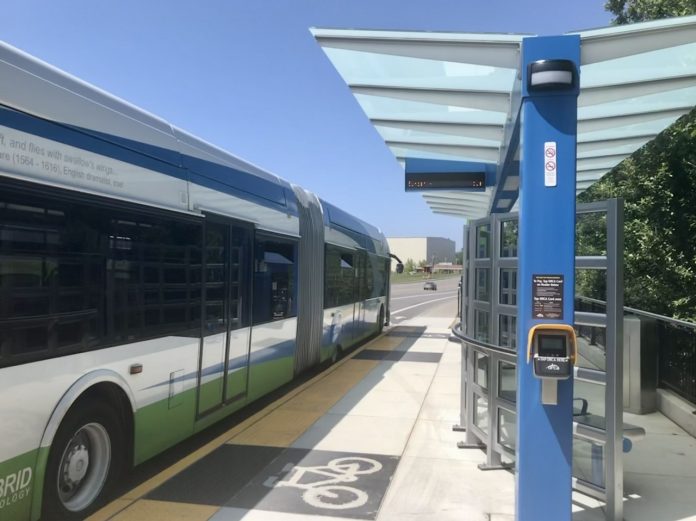 A new bus rapid transit line is coming to Snohomish County by 2024, joining two other lines already in service. Along with it, significant service growth across the Community Transit bus network is planned, rising more than 30% in six years. This is quite a rebound for an agency that had its very high hopes dashed by the pandemic.

On Wednesday, federal, state, and local officials gathered at the Merrill Creek Operations Base for a groundbreaking ceremony marking the start of base expansion and renovation. The project is a necessary part of Community Transit’s planned service expansions, including the Swift Orange Line in 2024. Among the attendees were Representatives Suzan DelBene and Rick Larsen, Snohomish County Executive Dave Somers, State Senator Marko Liias, and State Representatives April Berg, Shelley Kloba, Mike Sells, and Emily Wicks.

“It’s so important to expand our transit network while we meet the region’s transportation needs,” said Rep. Larsen. “In three years, the Swift Orange Line will connect residents and students to Lynnwood Link light rail, reducing traffic congestion and carbon emissions while improving the commute for riders getting to and from work, school, and recreational activities.”

The Merrill Creek Operation Base expansion and renovation is just one of seven different phases of projects to accommodate service expansions. The project will add six maintenance bays and expand two existing ones that can accommodate both articulated and double-decker buses by 2024. Other improvements will also be made to the facility, which importantly includes more parking space for up to 271 buses. Sixteen spaces are required for the new Swift Orange Line articulated buses. As part of this phase, renovation of the Merrill Creek Administration Building will turn the building into a transportation operations center by 2023.

Other phases will expand the Kasch Park Operating Base, add a new site to store paratransit and vanpool vehicles, and by 2024 expand and renovate the RideStore at Lynnwood Transit Center in time for the start of light rail service. Work on renovating the Kasch Park Casino Road Administration Building started in 2019 and is set to open in 2022. The full suite of base expansion and renovation projects are set to open over a seven-year period and cost $123.5 million.

As for the Swift Orange Line, it will run from Mill Creek to Edmonds Community College via Ash Way Park & Ride and Lynnwood Transit Center. It will be a crowning transit piece in the year that Link light rail is extended to Lynnwood. Community Transit is also planning to extend the Swift Blue Line to the NE 185th St Station in Shoreline in 2024, too. It’s especially unique because it will be providing limited local service in King County even though most of the benefit is to Snohomish County riders. That extension will also serve Aurora Village Transit Center in Shoreline.

Looking ahead, Community Transit intends to start planning of a fourth bus rapid transit line dubbed the Swift Gold Line in 2022. The line could launch in 2027 and run from Everett Station to Smokey Point Transit Center in Arlington with service on Broadway in Everett and Slate Avenue in Marysville. Conceptually, the agency wants to extend the Swift Green Line after that from Canyon Park & Ride to University of Washington-Bothell, which would be another expansion across the county line. And then another Swift expansion could come with the Swift Silver Line, which presumably would run from the Seaway Transit Center to SR-9 via South Everett and Mill Creek.

34% service growth is planned over the next six years

The 2021-2026 Transit Development Plan (TDP) outlines several priorities for all of this service growth:

Fundamentally, the pandemic did great damage to most regional transit agencies’ service growth plans, but Community Transit is pushing hard to catch up with its earlier goals. Those could be further expedited if Everett Transit merges into the system, providing opportunities for more operational efficiencies, additional equipment, and more than doubling service in Everett.

Community Transit will take comment on its 2021-2026 TDP through August 5th.