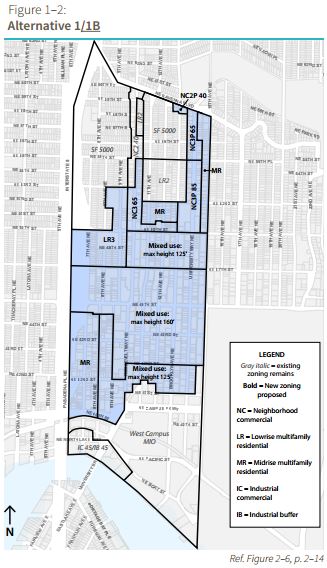 On January 8th, the Department of Planning and Development (DPD) issued a Final Environmental Impact Statement (FEIS) for the University District Urban Design Framework (UDUDF). Prior to this FEIS, the Department proceeded with a Draft Environmental Impact Statement (DEIS) in June 2014 to gather feedback on the issues and proposals identified in the DEIS. During the DEIS process, a No Action Alternative–growth under current development patterns–and two Action Alternatives–growth under different development patterns–for the neighborhood were evaluated by DPD. At the time, we encouraged readers to provide public comment on the project to support our own Alternative, dubbed “Alternative 4“, which was a combination of the best elements from the two Action Alternatives. We also provided a brief background on the overall project. In light of the released FEIS, we want to provide a debrief on the proposed changes, a call to action, remaining issues, and what’s next in the process.

At the heart of the UDUDF are options for growth in the University District, and the best ways to achieve it. The UDUDF examines a wide range of environmental issues like transportation, parks, emissions, utilities, and urban design to support and mitigate impacts from additional growth. The FEIS had only minor changes in respect to these issues when compared to the original DEIS Alternative Actions. A summary and deeper analysis of these background changes (if any) are discussed by the FEIS. However, the larger piece of the UDUDF FEIS are the proposed land use zoning changes. Broadly speaking these can be summarized as follows:

In the maps below, you can see the zoning changes proposed for Action Alternatives 1/1B and 2/2B. It’s important to remember that DPD grouped the counterpart Action Alternatives from the DEIS and FEIS together since actual zoning proposals did not change, only total dwelling unit numbers under the scenarios.

The DEIS generated over 100 comments with most in favor of some form of Action Alternative. An incredible number of comments even cited our Alternative 4 (see below) option for the UDUDF. The quality of the comments were certainly of high caliber with important issues raised like the need for more affordable housing options, increased transit service, more jobs and business, better public spaces, and the conservation of historic structures. But perhaps the most important outcome from the DEIS process was the forwarding of both Action Alternatives to the FEIS. This happened precisely because of the positive feedback that the Department received from the public and stakeholders on providing more opportunity and capacity for growth within the neighborhood. And, it’s for this reason that we believe some combination of the Action Alternatives are viable.

Maximizing the potential for development opportunities in the University District is an absolute necessity. Artificial restrictions through a less intense rezone would cause faster demolition and replacement of existing historic and affordable structures while also potentially reducing the capacity for new residents, jobs, and businesses over the 20-year planning horizon. These should be serious concerns for all when looking at both Alternative 1B and Alternative 2B as individually proposed. But there’s also a broader set of reasons that a bolder rezone should be presented to Council and ultimately adopted into code.

We previously noted that now is a pivotal time for the University District because “[it] is undergoing many major changes, including a new light rail station, an improved Burke-Gilman Trail, expansion of the UW’s West Campus, and dozens of mixed use projects in the heart of the neighborhood. The University District will be growing rapidly over the next 20 years. As the light rail station opens, and the network expands to Lynnwood and Bellevue, the University District will only grow more important as an educational, shopping, employment, and residential center, for students and long-term residents alike.”

We also said that “[t]he neighborhood core could become a strong anchor for research and development organizations, local services, offices that serve the University of Washington, and any private businesses that want space outside of Downtown Seattle. The University District’s convenient location and light rail access will make it a highly desirable place to live (even more than today); the more housing (and variety of housing types) that the neighborhood can accommodate, the better.”

For these reasons, we stand by our Alternative 4 and endorse it as the superior option for growth in the University District.

While we don’t know precisely when DPD will make their final zoning recommendations to Council, we encourage you to get ahead of the game and let them know now that you, too, still support our Alternative 4. And, perhaps more importantly, you should let Council know that approving the rezone at the earliest possible date is of utmost urgency. When you send comments to DPD (Dave LaClergue, Project Manager) and Council, please be sure to give very specific details about why you support Alternative 4. Doing so will add value to your overall comments so that Council understand why things like increased housing options, greater affordability, larger tax base, and efficient utilization of public resources are important to an Urban Center like the University District.

Next Up: Green Streets Plan

DPD is slated to issue a Green Streets Plan for the University District in the next month. While we enthusiastically approve of most elements in the draft plan, we are deeply concerned by the street plans for NE 43rd St and Brooklyn Ave NE. The future Link Light Rail subway station for the University District will be located on the corner of NE 43rd St and Brooklyn Ave NE. In response to this, Metro will likely reorient its bus network to allocate some bus lines to directly serve the subway station.

By the nature of this facility, a massive number of passengers (12,000 at the very least) will be entering and exiting the station on a daily basis. Most passenger trips will be headed to and from the University of Washington campus, University Way (The Ave), local offices and residences, and presumably connecting bus services adjacent to and in proximity of the station. This also means that a great share of these trips will be directly funneled along the length of NE 43rd St from the station to the west edge of the University of Washington campus since bicyclists and pedestrians will want to go the shortest distance and most active way to and from their destinations. Despite whatever traffic engineering went into this plan, desire lines of foot-powered users will ultimately rule the day. Given this situation, the plans for the above-mentioned streets are wholly inadequate.

For instance, NE 43rd St is planned to only provide a 20-foot sidewalk on the north side of the street and a 10-foot sidewalk on the south side of the street between Brooklyn Ave NE and 15th Ave NE. Meanwhile, constant access will be given over to car traffic via two travel lanes (no different than today). Moreover, the Green Streets Plan explores a popup weekday farmers’ market on Brooklyn Ave NE–immediately adjacent to future bus bays–which would likely require the rerouting of buses when transformed into a festival street or over-programming of the space.

In light of this, the prioritization of the streetscapes seems poorly pieced together. NE 43rd St should give pedestrians and bicyclists full priority over all other modes. The street should instead be closed to vehicular traffic in its entirety between Brooklyn Ave NE and 15th Ave NE. This could also double as the festival street due to the wide right-of-way and two blocks of pedestrian orientation. Meanwhile, Brooklyn Ave NE should remain free of uses that might force reroutes of buses off of the street. While that doesn’t mean a farmers’ market or other festival uses in some form couldn’t exist, they should not impede the right-of-way or bus boarding areas. To do so would cause constant confusion to passengers intending to use any future bus facilities adjacent to the subway station.

Down the Road: Future Action on Zoning

Again, while we are not certain of a particular date for DPD to forward legislation to Council on the rezone, we anticipate that this will occur sometime in the summer. We are hopeful that the process will not expand beyond this period and that Council will act quickly in the interest of allowing development to occur sooner rather than later. Legislation must first pass the Planning, Land Use, and Sustainability Committee, which is chaired by Councilmember Mike O’Brien, before being transmitted to the full Council. In the meantime, getting comments in to all of the key decision-makers and policy-crafting bodies is very important so that this process can come to a swift and desirable conclusion for a better University District.

*This number is based upon an average dwelling unit size of 850 square feet and maximum residential capacity assumed under current and proposed zoning alternatives. It is not a calculation discrepancy.