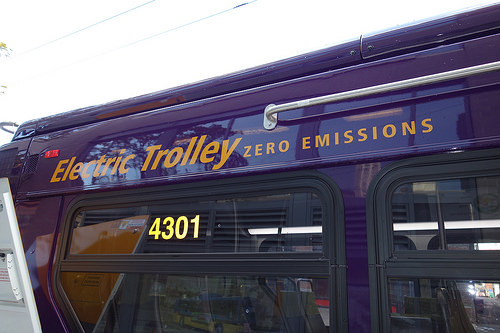 The Metropolitan King County Council is getting serious about climate change. Yesterday, the Council announced that it had come up with a brand new set of policies to curb carbon emissions. The policies will direct two County departments to become carbon neutral, create a new carbon offset program, and allow others like governments, individuals, and private entities to buy credits under the offset program to collectively reduce emissions.

The initiative, called the Transit Carbon Offset Program, is an incredibly unique strategy for the County. Credits that are sold under the program will be directly invested in transit. Yes, transit. Carbon offset programs aren’t new, there are plenty of them out there like clean energy, reforestation, land banking, and funding building rehabilitation. But King County’s new program would be the first of its kind.

Revenue derived from the sale of transit offset credits would be used by King County Metro Transit (Metro Transit). Metro Transit could spend the credits on new service hours or on investments that would provide even more emissions reductions beyond regular operations.

While transit can still be carbon intensive, the service that it provides can more than make up for the fuel burned by running buses. Transit takes cars off of the road, puts less stress on other services, and reduces inefficient land use patterns.

As King County notes, over 118 million trips were made on Metro Transit last year, which is the equivalent of 175,000 fewer cars clogging the roads each weekday, and led to a reduction of over 600,000 metric tons of carbon emissions. That’s a big bite into carbon emissions. Of course, Metro Transit is also leading the way with fleet modernization. The agency boasts a large and growing fleet of hybrid buses, and has the second largest fleet of zero-emission electric trolleybuses in the nation.

The new legislation also requires the Wasterwater Treatment Division and Solid Waste Division to become carbon neutral. The departments are directed to buy carbon offset credits for any emissions that the departments produce. This would therefore make them net carbon neutral. The transit carbon offset credits would be the first type of credit that the departments would be allowed to purchase. Although, the legislation does provide an out should the transit credits not be comparably priced.

To administer the offset program transparently, Metro Transit will consult with a third-party organization to monitor the transit offset credits. The third-party organization will be responsible for verifying how Metro Transit will spend revenue from the offset program. Ultimately, Metro Transit must show that the offset credits go toward programs and service that reduce carbon emissions. This will also help provide a rating and establish the cost basis for each credit. These carbon offsets will be available for purchase by WTD, SWD, other governments, and private individuals and entities.

This is a win-win ordinance. It’s good for our environment and good for our economy. It will make our two utilities carbon-neutral and provide for further investment in Metro Transit, to take even more emissions out of the air. I felt that we needed to take significantly stronger, proactive steps today to address the pressing challenge posed by climate change and local air pollution.

With the reality of climate change it’s more critical than ever to continue our commitment to protect the natural resources of our environment. We need to take bold action to meet this challenge and reduce carbon emissions. Investing in energy efficiency and other best practices to reduce greenhouse gases will make a healthier, more sustainable future in King County.

The legislation may appear disconnected to some, but seemingly benign activities like flushing your toilet, throwing food scraps away, and driving to work can have big collective impacts. This legislation wisely looks at our everyday actions and seeks to connect them with a smart solution to reduce air pollution. And while it’s government-focused, it gives businesses and individuals concerned about their environmental impact another practical way to invest their Green dollars. This innovative approach is certainly something that other agencies should consider whether for transit or other valuable carbon-reducing services. For King County though, increased transit service will only help further our collective environmental goals toward a carbon-lite region.