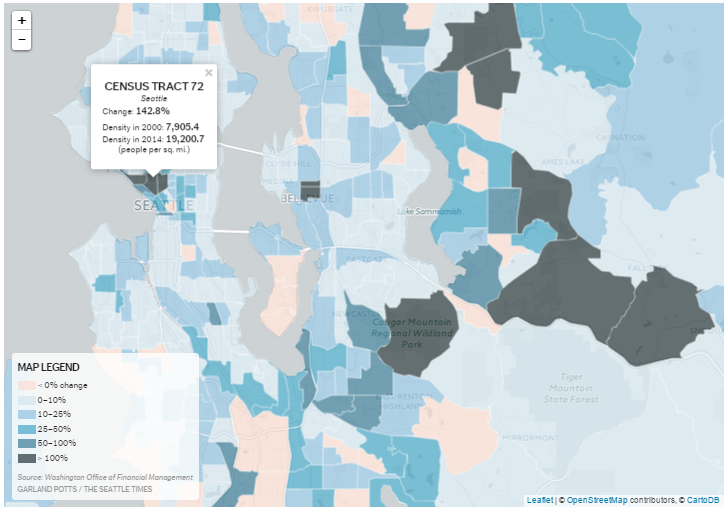 Between 2012 and 2013, Seattle was the nation’s fastest growing big city ($). Headline after headline since cheered this revelation, and it may very well still be true. For most long-time Seattle residents and even many newcomers, that narrative isn’t particularly fresh at this point. Why? Because they’re still witnessing a boom as the city’s skylines fill with cranes stretching from Northgate to Pioneer Square to even Alaska Junction in West Seattle. Meanwhile, startups and corporations are eagerly adding hundreds of jobs every month in every corner of the city. The rapid growth of Seattle is obvious. But what does that mean in percentage terms?

It turns out that by taking data over a 14-year period (2000 to 2014), Seattle had a dozen or so census tracts that saw more than 25% growth, largely in central Seattle. Three of these (in South Lake Union and Uptown) saw triple digit growth. But, it isn’t just Seattle neighborhoods that have seen explosive growth rates. Gene Balk (aka FYI Guy) of The Seattle Times penned an article earlier in the week that showed increasing densities extending throughout most of King County ($). Rapid growth rates were most keenly seen in established urban centers and toward the edge of urban growth areas. In fact, 8 of the top 10 hottest spots for rapid densification weren’t even in Seattle. Balk takes note of one such location beyond the urban fringe:

Just east of Redmond, in unincorporated Union Hill-Novelty Hill, density has soared by 580 percent since 2000.

This had been an entirely rural area until a master-planned development–locals call it “The Ridge”–added 4,500 housing units. In 2000, there were only about 300 people per square mile there. Today, that’s jumped to more than 2,100.

Of course, using metrics like percentage increases or decreases in growth only tells one side of the story. On the one hand, it tells us that there is still an appetite for deeply suburban and exurban growth by developers. But it also neglects to highlight the really big, underlying numbers that make up the percentages. In 2000, the census tracts of South Lake Lake-Union East and Union Hill-Novelty Hill had population densities of 6,242 and 323 per square mile, respectively. Fast forward to 2014, they had grown to densities of 17,437 and 2,134 per square mile, respectively. Certainly a growth rate of 179% is less impressive than 580%, but comparing urban neigborhoods like South Lake Union to the expansive hinterlands of Union Hill-Novelty Hill may be more of a case of apples and oranges than an enlightening foray into total regional growth rates.

If we played out the same sort of growth in previous time periods for King County–say 1980 to 1994–we would like see a very different trend. One in which very low growth takes place in Seattle while census tracts in Bellevue, Kent, Federal Way, and Bothell are the flash points.

A good follow-up to Balk’s densification map might be one that shows total growth over the same 14-year timeframe by aggregated rural census tracts and urban census tracts (by city and urban unincorporated areas). I’m willing to bet that the rural growth rate is substantially more muted than the urban growth rates.