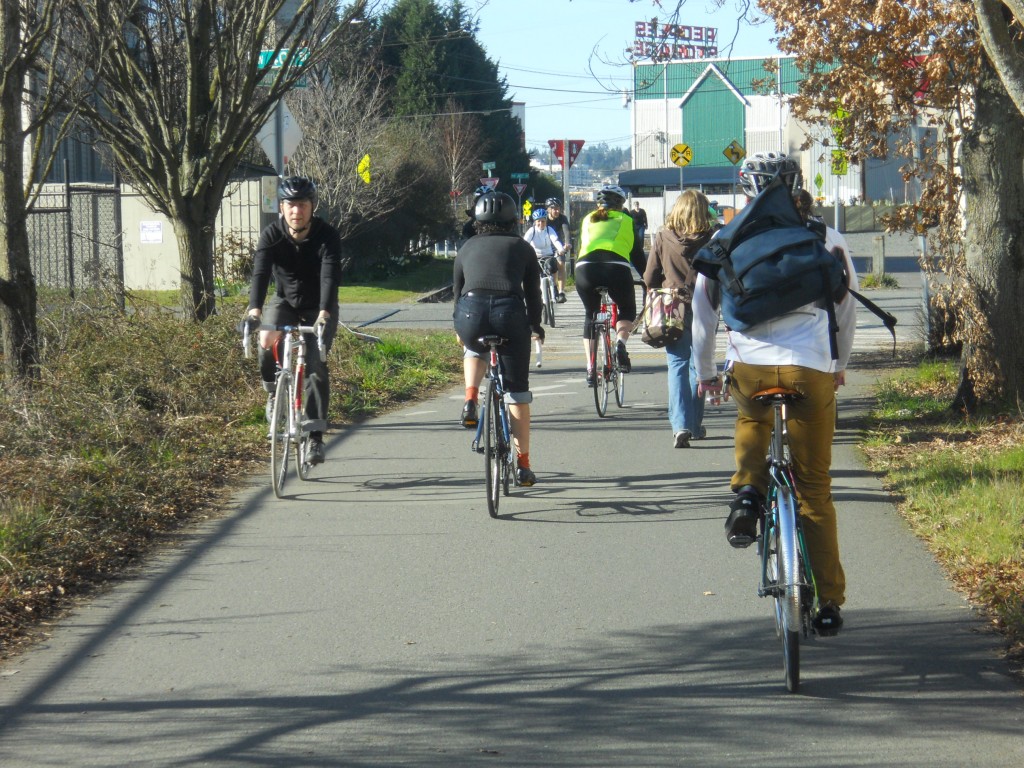 On Thursday night, the Seattle Department of Transportation (SDOT) hosted an open house on the alternatives for completing the unfinished part of the Burke-Gilman Trail in Ballard. The 1.4 mile “Missing Link” is the only incomplete portion of the trail, and advocates have been trying to build it for decades. Planning and design was finally underway until 2009, when a group of industrial businesses along Shilshole Avenue NW sued; they argue it’s unsafe for their trucks and trains to interact with bicyclists and pedestrians. SDOT is now moving to complete a $2 million Environmental Impact Statement (EIS) of three possible routes by Spring 2016.

Opened in phases starting in 1978, the 18 mile trail now stretches from Golden Gardens Park on the Puget Sound in Seattle to the city of Bothell north of Lake Washington. It was one of the country’s first “rail trails”; built in abandoned railroad right-of-way, it is extremely flat and has few road crossings. The trail attracts walkers, runners, bicyclists, and skaters for both recreation and commuting. In Seattle, it connects the major areas of Ballard, Fremont, the University of Washington, Sand Point, and Lake City.

The Missing Link was a portion that was never completed, and the result has been disorientation, traffic conflicts, and many injuries. At the meeting on Thursday, Brock Howell with Cascade Bicycle Club said, on average, the Missing Link sends one person to the hospital each month. Unfortunately, SDOT does not have another essential piece of information about the missing link: how many people use it. Staff at the meeting said they vaguely believe that the number of bicyclists will increase when the trail is completed, but don’t have any numbers.

From the east, the trail ends at the intersection of NW 45th Street and 11th Avenue NE. It’s a busy roadway crossing, with lots of drivers going to and from an adjacent grocery store. Moving westward, bicyclists can use a two-way protected bike lane on the north side of NW 45th Street; this temporary solution was completed only last year. It’s a one-way street for cars, but confused drivers can often be spotted in the bike lane. There are no sidewalks, so there are no clear options for people on foot once they reach the end of the trail.

NW 45th Street turns into Shilshole Avenue NW underneath the Ballard Bridge, where the bike lane crosses a set of railroad tracks that are technically still active but rarely have any use. People bicycling are often injured here as they fall when crossing the tracks. SDOT’s control over the street and maintenance responsibilities for the tracks (they are owned by Ballard Terminal Railroad) gives them the option of moving the tracks, but they can’t be permanently removed or paved over.

Shortly after the bridge the protected bike lanes end at an intersection with NW 46th Street. The high volume of cross-traffic does not stop, making it difficult for people to cross the street. One suggestion at Thursday’s open house was to immediately make this an all-way stop. SDOT staff seemed open to the idea. Interim improvements like this are needed until a fully functional trail can be built.

From there, the flattest option is along the two-lane Shilshole Avenue NW. The street is in extremely poor condition for anyone walking or bicycling. Cars park on the road shoulders, there are no sidewalks, the pavement is poorly maintained, and the speed limit is 30 miles per hour. There aren’t even sharrows (markings that alert drivers to the presence of bicyclists) or signage directing people to the rest of the trail. There are a number of alternate routes with less traffic, but bicyclists must ride uphill in the street with cars or on narrow, crowded sidewalks. The official trail finally picks up again at the Ballard locks, near the intersection of NW 54th Street and 30th Avenue NW.

According to Tom Fucoloro at Seattle Bike Blog the Missing Link was identified for funding by the Seattle City Council in the 1990s. Design was underway in the late 2000s when a group of businesses led by the Ballard Chamber of Commerce, including Salmon Bay Sand & Gravel and Ballard Oil, sued to stop the project:

And then they sued some more. Basically, any time there was a chance to sue or delay, they have done so…wasting more time and money (the city’s and their own)… So in 2012, the city gave up on the normal process for building a trail and decided that with such unrelenting legal delay tactics the only option is to conduct a full Environmental Impact Statement, an expensive study usually reserved for…mega-projects.

One of their main complaints was that the trail could increase their insurance rates. At Thursday’s meeting, an employee of an industrial business along an existing portion of the trail said that worries about liability and safety are overblown; he said his company’s truck drivers have no problem interacting with the many bicyclists and pedestrians who use the trail.

In August 2013, SDOT collected comments on what the scope of the EIS should be. An overwhelming majority of people supported an alignment on Shilshole Avenue NW, which would be the most direct connection, and the largest concern by far was for safety. Despite the clarity of the solution and community support behind building the trail as soon as possible, the EIS process will continue for at least another 18 months. Fucoloro has railed against the City of Seattle for taking so long.

The Draft EIS will examine three route alignments: Shilshole Avenue NW, Ballard Avenue NW, and Leary Avenue NW. These were narrowed down from 58 initial route segments identified during the scoping period. Each alternative will be studied in the context of land use, economics, traffic, parking, recreation, air quality, and the cultural history of the neighborhood.

SDOT staff and their consultants from Environmental Science Associates (ESA), whose local office is on Shilshole Avenue NW, took several questions from the audience on Thursday night. One person asked whether the economic analysis will consider economic benefits. ESA said it would not. They will only be studying the economic costs to surrounding properties, even though it’s clear the completion of the trail would be a major boost for businesses and property owners alike. Similarly, ESA will not be considering the long term economic impacts of increased bicycling among Seattle residents.

Another asked whether the the study will look at standard bike lanes and sidewalks. The answer was that only a multi-use trail will be considered. This type of facility will be difficult to put on any street but Shilshole Avenue NW, due to the context of the Ballard commercial district and the current configuration of streets in the area. However, the EIS will only hold up in court if the alternatives are studied in detail.

The Draft EIS will be released for public comment in late Spring 2016. Afterwards the consultants will reanalyze and selected a preferred alternative for the Final EIS, to be released by the end of 2016. The cost to taxpayers for this process is $2 million. If no more appeals are filed, the missing link might be built by 2017 or 2018 at the earliest.