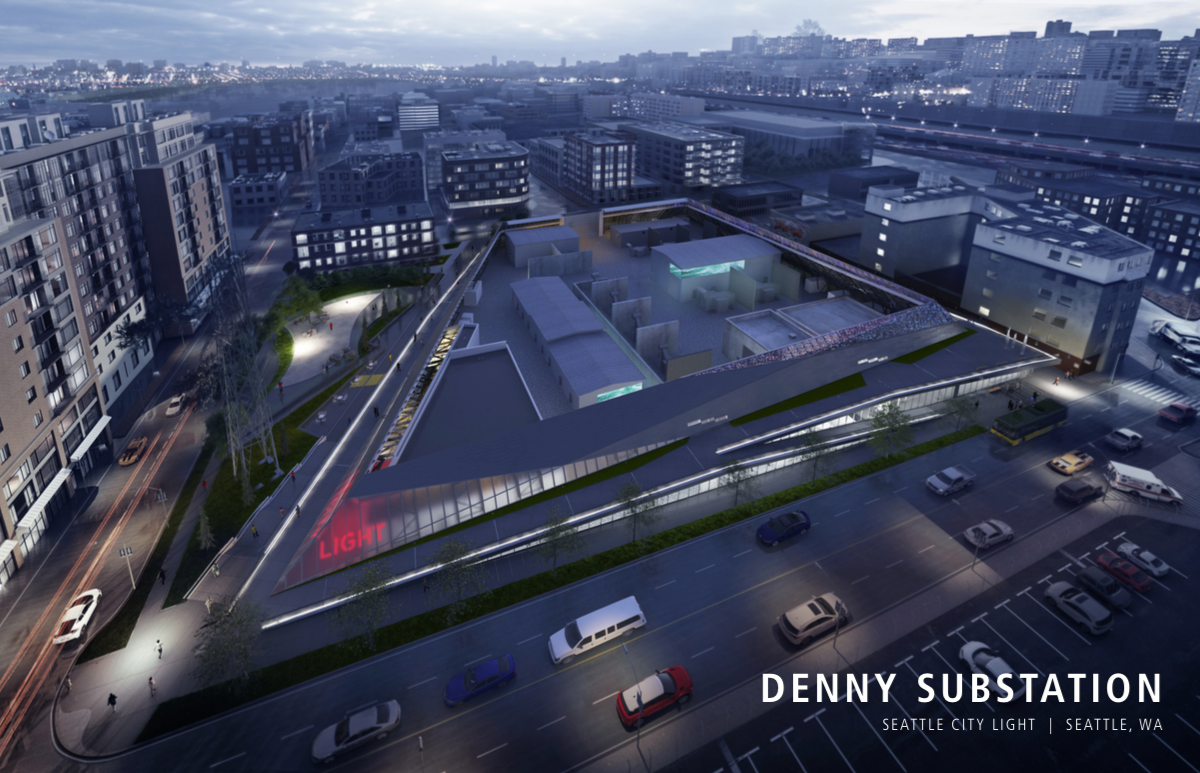 It wasn’t all that long ago that public works projects were both functional and beautiful. Take a walk around many areas of Seattle and you’ll see a wealth of intricately designed bridges, water towers and reservoirs, and piers. But somewhere along the way, building infrastructure became devoid of human connection and place. Too often bridges are cast in concrete without distinguishing features while utility structures are merely uninspired block shelters. So it’s unexpected when a project goes against the grain and makes you do a double-take.

Seattle City Light is taking a page from the history books and designing a new urban substation with people in mind. The Denny Substation, as it is known, charts its history all the way back to 2003 when the City Council first affirmed their commitment to ensuring that South Lake Union would become a competitive location for research, innovation, and new commerce. Shortly thereafter, Seattle City Light began a site selection process to identify possible locations within South Lake Union for an electrical substation. But it wasn’t until four years later that the agency formally chose a site. Three parcels, centered on the old Greyhound Maintenance Facility, were picked by Seattle City Light to house the substation facility.

Over the past few years, Seattle City Light has been focused on the outreach and site design process. As part of this, the agency commissioned NBBJ, a world renowned global architecture firm, to conduct project design work for the substation site. NBBJ’s local architects have explored a number of site design options, but have finally arrived at a final proposal following the outreach process, which wrapped up with the issuance of the Final Environmental Impact Statement in January and 90% design concept in February. Reviewing agencies like the Seattle Department of Planning and Development, Seattle Department of Transportation, and the Seattle Design Commission have also had their chance to weigh in on the project proposal; each of them has recommended that the project proceed. But since the project must be granted a host of departures from the land use code and a street vacation, the Seattle City Council must decide if the preferred project alternative provides enough benefits to gain approval.

While the Denny Substation will function as a multi-use facility, the most basic purpose of it is to operate as an electrical substation. In the image below, you can get an idea of how the site interior will be laid out. Hidden behind metallic walls, a substation yard will contain maintenance structures, a control and communications room, and multiple transmission structures to convert the electric loads into usable electricity. These elements actually occupy the majority of the site and will help generate the energy needs throughout the area as growth continues in this part of Seattle. But you wouldn’t know that from the elegant renderings that Seattle City Light has prepared.

But since most people will be interested in what he building will look like, here are four renderings of the substation at street level:

Seattle City Light has gone to great lengths to create an active public space out of what would typically be a boring substation facility. Lining the exterior of the metallic facade will be a series of viewing portals and interpretative graphics that will give visitors a better understanding of the facility. These interpretative features will be connected with intentional paving and landscaping to draw visitors to walk the quarter-mile loop around the building. This loop will be partially at-grade and partially elevated through a series of ramps. At the highest point of the elevated walkway will be a viewing deck overlooking Denny Way with some seating and lively art installation called the “Switchwall”, which will change color as wind flows (you can see a portion of the “Switchwall” in the top right of the image below).

Towering above the facility at 110 feet will be a sculpture called the “Transforest” by Lead Pencil Studios. The design clearly evokes an interesting duality of an old growth tree and the lattice-work of a modern transmission tower. The old growth tree element is meant to harken back to a time before urban development in the Puget Sound when endless forests occupied the landscape. The transmission tower lattice-work represents the opposite–a modern region that is developed and depends upon massive infrastructure dotting our environment.

A large public space will anchor the western edge of the substation site with an off-leash dog park acting as the centerpiece. The park space has been sculpted to be irregular but modern with a pathway diagonally splitting the space to reinforce the angular nature of the substation. The off-leash dog park, meanwhile, is designed to be well fenced and have play features for canines. Conceptual drawings show that boulders may act as the play features while foliage lines the edges of the space to give a sense of forestation.

Landscaping will consist of a hedge row on the north to screen the adjoining apartment building while trees and other greenery will be intentionally placed throughout to create visual interest and intimacy. A community space will also be located on the western side of the building. Seattle City Light wants to provide both gallery space and meeting space to keep it flexible and active. Another public space will be located at the southeast corner of the structure, which will house an exhibit hall, small theater, and “Energy Inspiration Center”.

While it is beyond the scope of the project, plans show that the southern end of the Minor Ave N and Denny Way intersection may see curb bulbs added to block corners. For people crossing Minor Ave N on foot today, the distance between curbs is quite long and has led to many near-collisions with turning vehicles. Placing curb bulbs here would greatly improve the walking experience on the southern part of Denny Way.

What the project will deliver is a substantial boost in sidewalk widths north of Denny Way. Part of the decision to increase the sidewalk width is to give people an opportunity to appreciate the structure, gather, and access the community facilities. But the recessed aspect of building also gives the structure more shape and functional space for passengers to wait at a new bus shelter. The sidewalk will be lined with brand new street trees, a welcome addition to a particularly dreary block in need of shade and color. Seattle City Light will also be required to make off-site improvements on Pontius Ave N at each intersection north of the site to Republican St. Additional curb bulbs, planter strips and street trees, lighting, and enhanced crossings could be implemented as part of the off-site improvements along Pontius Ave N.

The bus shelter will be entirely integrated into the pedestrian space and structure. A projecting overhang, doubling as a deck above, will provide shade and weather protection for bus riders waiting at the north Denny Way stop. Seattle City Light plans to make the space incredibly modern with all of the bells and whistles: stylish seating, sleek rubbish bins and leaning rails, and even a real-time arrival kiosk. Of course, no good bus stop would be complete without bicycle parking, too.

Seattle City Light wants to make use of the existing alleyway at the project site’s eastern edge, which connects Denny Way to John St. The alleyway will feature colorful pavers to make the block-long space more visually interesting and engaging while drawing people down the block.

A bioswale planter strip will sit between portions of the alleyway and eastern facade of the substation. It’s a practical feature that not only greens up the space, but also offers water recapture and water quality treatment. Interspersed within this planter strip will be “micro sound environments” that are audible only to a passerby. Seattle City Light hopes that this will bring a sense of life and environment to an otherwise inactive side of the building.

In a world that’s often become too focused on utility over design and context, Seattle City Light shows that things can be done differently. An electrical substation can be more than just a substation. It can be a place to gather and celebrate while also supplying the resources needed for growth. With a bit of creativity, public utilities can truly build public facilities serving multiple urban needs under the same roof.

If you wish to weigh in on this project, the Seattle City Council Transportation and Town Hall Committees will convene a joint session  tomorrow evening (July 30) for a public hearing. This hearing begins at 5.30pm at the Belltown Community Center, located at 415 Bell St. Alternatively, written comments may be sent to Councilmember Tom Rasmussen, Chair of the Transportation Committee.