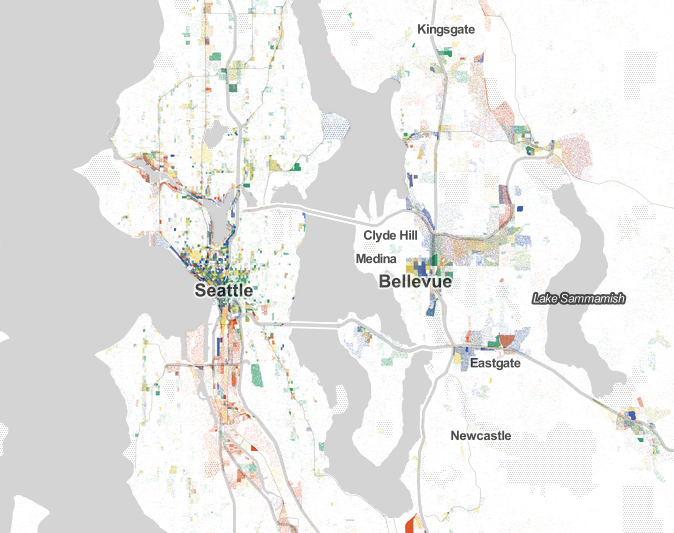 Jobs, jobs, jobs. It’s all about the jobs. But where exactly are they? Robert Manduca, a PhD student at Harvard University who specializes in sociology, data, and cartography, may have an approximate answer to that question. Compiling job data from the Center for Economic Studies, a division of the Census Bureau, Manduca produced an interactive map that depicts every job in the United States. Manduca achieves this by breaking down job data into unique dots within Census blocks that approximates the location of jobs and their relative concentrations. He goes further by parsing out jobs into four types with corresponding colors:

Though he studies urban economic development, Manduca was still somewhat surprised to see how important downtowns remain as employment concentrators. By a significant measure, most jobs are still outside urban cores, “the result of a retreat from America’s cities that has been going on for decades,” as the New York Times has written. But in some cities, employment—particularly highly skilled and high-paying employment—is growing in downtowns, and declining in the suburbs.

Manduca was also curious to see how concentrated jobs are in the suburbs, too. “I thought they’d be more evenly spread,” he says.

Manduca’s suggestion appears to hold true from across metro regions. Even here in the Puget Sound, despite strong concentrations of employment in Seattle and a number of urban centers within regional cities, most jobs tend to be spread out to far corners of the region like Graham, Preston, and Silverdale.

Zooming into the Puget Sound, it’s obvious that jobs follow the spines of major infrastructural corridors like interstates, highways, and local thoroughfares. Only in a few established cities does employment radiate beyond these major corridors into districts and neighborhoods. Most telling in the high level map is the relatively consistent allocation of job types. Manufacturing and trade are typically located in few areas, but on large tracts of land. Jobs like retail, personal services, healthcare, education, and government are almost ubiquitous and spread throughout the region. Professional services are the rarest job categories and are located almost exclusively in urban centers.

South Puget Sound has an incredible abundance of manufacturing and trade jobs, particularly within the Kent Valley stretching from Tukwila and Renton to Sumner and Puyallup. Other major centers for this job type include areas near the Port of Tacoma, Seatac Airport, and South Tacoma. The next most prominent job type falls within the retail, hospitality, and general services category; this is more broadly spread across the area, often in close proximity to residential districts.

North Puget Sound has typical spatial allocations of jobs. Major linear corridors like SR-99 and Bothell-Everett Highway tend to be retail- and service-oriented, while major urban centers like Everett and Bothell, and Lynnwood see smatterings of professional services and healthcare/education/government. Most noticeable, however, is the heavy concentration of manufacturing and trade between Everett and Martha Lake. That area is home to Boeing’s Paine Field facilities, in addition to hundreds of complimentary businesses and industrial uses.

The Seattle-Bellevue-Eastside sector of the Puget Sound, though, consists of the most highly diverse and concentrated centers of employment within the region. Almost all of the Census blocks near the core of Seattle are packed so tightly with dots that it is impossible to differentiate the level of job diversity within each block; the most dominant job types essentially appear as the only job type within those Census blocks. Downtown Bellevue, in addition to a number of other Eastside locations, mirror patterns seen in Downtown Seattle. It’s clear that a wide range of job types prevail within these urban districts at very high densities.

What other patterns do you see?