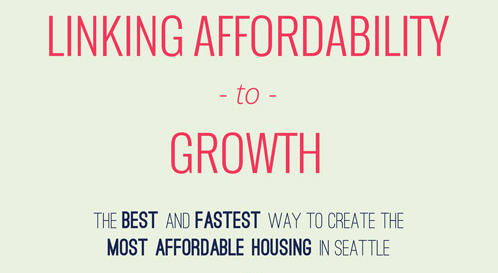 Over the last two months the Mayor’s Housing Affordability and Livability Agenda (HALA) recommendations garnered tremendous debate, some of which nearly killed the historic proposal and short circuited a real discussion. As a community, we need to continue talking about how Seattle can grow without causing further displacement. We need to ensure our city remains diverse and vibrant while allowing more people to move here. We need to ensure the city doesn’t become an exclusive playground for the wealthy. The HALA proposals attempted to start this conversation. Fortunately, the mayor and council weathered the heat and are still considering the sixty-five recommendations. Yet still attention is focused on the controversial issues or the missing policies rather than the heart of the policy. This is a mistake.

The most impactful proposals would promote fairness, affordability and sustainability in Seattle’s housing market. These policies include mandatory inclusionary zoning with an increase in development capacity, a fee on commercial development to fund affordable housing, and an expansion of urban village boundaries around frequent transit. These proposals are being heralded as a “Grand Bargain” because of broad support from Seattle advocacy groups.

The Growing Together coalition includes labor, architects, social justice advocates, the affordable housing community, neighborhood groups, environmentalists and much more. This broad partnership is a powerful political force. We thought this sort of political alignment was possible when we wrote about linkage fees. The Urbanist joins these voices, supporting the HALA recommendations. The proposed policies made this coalition possible by advancing a community conversation about Seattle’s rising housing costs and diminishing diversity. The end result was an agreement on how to grow sustainably and equitably. The urbanists we know believe planning and policy like this is necessary for an inclusive and diverse city.

Unfortunately, the recommendations were met with a startling amount of negative feedback. The criticisms largely fall into two camps: some fear drastic changes to single-family zones and others think the recommendations won’t go far enough to protect tenants. The details of these complaints deserve further consideration and discussion. Unsurprisingly, The Urbanist supports allowing diverse building types in single-family areas. Duplexes, triplexes, row houses and stacked flats already dot our single-family neighborhoods. Due to their small size, new houses would provide homes at a lower cost than the larger, traditional single-family homes, increasing the people who can access various neighborhoods and ensure the children of current Seattle residents will have a place to live.

We also think more needs be done for tenants to minimize displacement and to ensure minimum wage workers can live close to their jobs, frequent transit, and commercial services. Increased tenant protections and city bonding could meet these needs. Continuing the conversation about single-family zoning, tenant protections and other policies is important.

However, our opinions, disagreements and conversations must not sink the most important HALA recommendations. The hardest work begins now. Seattle must create concrete policy through intentional and inclusive collaboration with communities, advocacy organizations, the development industry, and elected officials. There will likely never be a set of recommendations with universal support. Even if we are unhappy with one or two recommendations, it is critical that council members and candidates hear support for the central, Grand Bargain policies. These primary recommendations, coupled with proposals to double the housing levy and expand the multi-family tax exemption (MFTE), would be the biggest win for affordable housing in decades. You can help achieve this historic accomplishment by attending the public hearing on September 9th and voicing support for the proposals.

Our board and volunteers consist of both renters and homeowners. Some of us are fortunate enough to utilize the MFTE, while others have moved because of rent increases. Some live in microhousing and some own a single-family home. Many of us have seen our neighborhoods change dramatically and some have seen virtually no change at all. Some support development in their neighborhood and others don’t. We don’t all agree on every recommendation. But overall, we applaud the twenty-eight housing experts who spent ten months crafting a holistic solution. We hope that everyone who cares deeply about affordable housing joins The Urbanist in enthusiastically supporting the Grand Bargain for an affordable, equitable, and sustainable city.