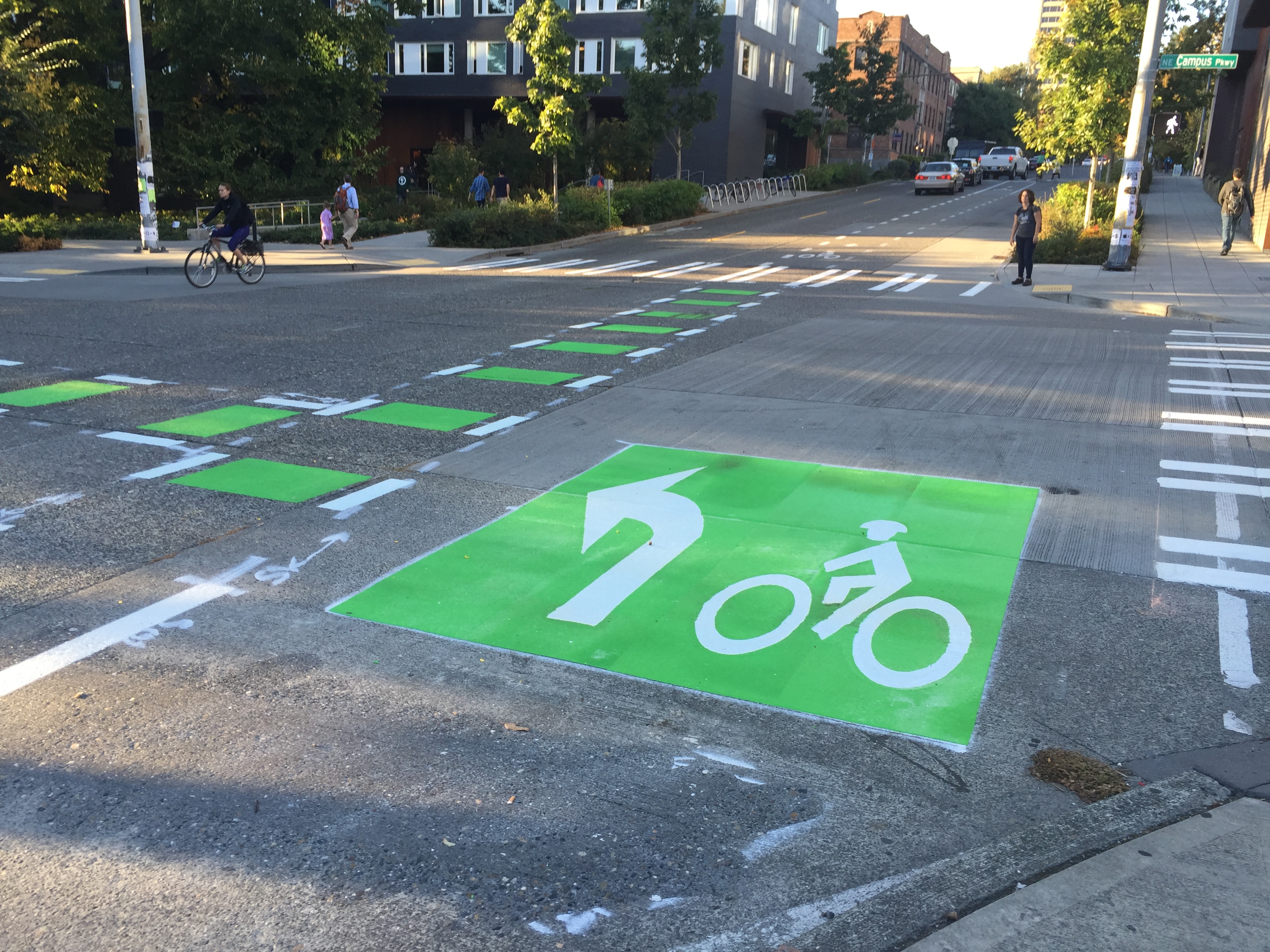 Over the last few weeks the, Seattle Department of Transportation (SDOT) installed protected bike lane (PBL) projects on both ends of the University District. The neighborhood is popular for bicycle commuting, with over 5,000 bike daily trips to the University of Washington campus. The projects are a step towards implementing the city’s Vision Zero plan to eliminate traffic deaths and fatalities, and they will encourage even more residents, students, and employees to bike. These projects are low-hanging fruit however, and key connections to the Burke-Gilman Trail and between the north and south ends of the neighborhood remain unfulfilled.

In the north is a project centered on Ravenna Boulevard. That street has existing bike lanes buffered by paint, and with this project the lanes are upgraded to “protected” status with the simple addition of plastic bollards to more clearly delineate their separation from driving lanes. As I described in a previous article, the eastbound bike lane is also extended two blocks to get bicyclists safely up the hill to 15th Avenue NE. Dashed green lanes were added at intersections to make drivers more aware of people bicycling.

PBLs were also added on Cowen Place, which is wide enough to preserve two lanes of parking, and the Cowen Park Bridge, which was recently narrowed from four lanes to two lanes due to engineering concerns.

Another big change is the redesign of a dangerous intersection, Cowen Place and 15th Avenue. A huge curb radius on the north side of the intersection and a complete lack of crosswalks encouraged vehicles to speed through the area. Now the intersection has been made into an all-way stop with crosswalks and PBL markings. 15th Avenue is broken into two segments to square up the intersection, a tactic that encourages stop sign compliance and to facilitate the heavy bus traffic that moves between Cowen Place and the north part of 15th Avenue. The bus stops at this location were temporarily relocated two blocks south (right next to my old apartment, actually), but they won’t be used once the U-Link bus restructure move buses off of 15th Avenue next spring.

Below is a video of the 15th Avenue and Cowen Place intersection in action.

To the south SDOT also added PBLs to three blocks of Campus Parkway and one block of Brooklyn Avenue NE. Campus Parkway was grossly oversized, being 28 feet curb-to-curb in each direction. A 5 feet bike and 2 feet buffer were added in each direction with no impact to other modes, including the many bus routes that use this street.

At the west end of the project area the PBL will link to the University Bridge and the temporary Roosevelt PBL, which will be made permanent with a repaving project at the end of the year. The Campus Parkway project also provided the opportunity to channelize a complex intersection where NE 40th Street merges with westbound Campus Parkway and southbound Roosevelt Way NE. The ending spur of Campus Parkway is reduced to one lane, requiring cars to wait behind buses at a bus stop there. New stop bars also make the merging sequence more clear.

Unfortunately, the Campus Parkway project fails to make a key connection to the most popular bike route in the state: the Burke-Gilman Trail, which passes by the area only one block from where the Brooklyn Avenue PBLs end. The greenway project on 12th Avenue NE (shown on the project map in green) also fails to connect with the trail by way of new UW dorms fronting Campus Parkway, which included a pedestrian through-route with stairs but no bike facilities.

Seattle Bike Blog had this to say about the problem:

Unfortunately, the bike lanes will only go for a block, stopping one block short of the Burke-Gilman Trail. Looking at the map above shows you just how close we are to finally making a solid connection, but a series of maddening mistakes in planning by both the city and UW mean this connection will remain incomplete.

The Brooklyn protected bike lanes will not extend south of NE 40th Street to connect with the Burke Gilman Trail because the roadway on this part of Brooklyn is too narrow to accommodate them. The roadway is only 25 feet wide.  Instead, this section of Brooklyn has a northbound, regular bike lane, and for southbound bicyclists there are sharrow pavement markings indicating that bicyclists share the road with motor vehicles.

However, Brooklyn does have extra right-of-way taken up by a double sidewalk that apparently used to be a separated bike lane. Re-implementing that project or moving the curb outward could provide space for the uphill protection that is needed for the many bicyclists making their way from the Trail to campus.

The Ravenna Boulevard and Campus Parkway projects are good steps towards a bike network that encourages people of all ages and abilities to ride. Separation from vehicle traffic is critical to getting people to bike who choose not to for safety reasons. However, the two projects do nothing to connect with destinations in the greater area such as the future light rail station at NE 45th Street, the University Heights Community Center, or the Roosevelt neighborhood.

In short, the University District lacks a protected north-south bicycle route; I’ve frequently advocated for building PBLs on 15th Avenue NE because that street is built (and on-street parking is timed) with more capacity than it needs. There is the 12th Avenue NE Greenway, but that route is distant from bike-friendly destinations, mixes people biking with people driving, and can be hard to reach due to the poor connections at both ends.

The City of Seattle should be applauded for implementing these projects, but more work needs to be done by the City’s transportation planners and local bike advocates to achieve a more comprehensive bicycling network.