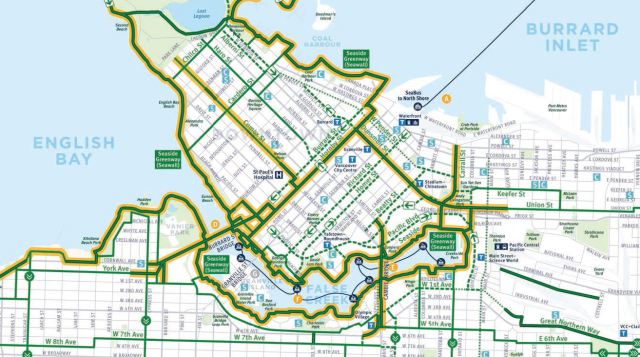 Earlier this year, I had the pleasure of visiting Vancouver, B.C. I managed to stay for a weekend instead of 30 hours and had a real excuse to go: the SCARP Symposium. Planning students at the University of British Columbia (UBC) put on the seventh iteration of this annual one-day event about urban issues in Vancouver and the greater region. First up, the most important things I saw and heard at the symposium that other Northwesterners may be interested in. I’ll tie that into the city’s previous transportation referendum and my experience of the city by bike, which I hauled up via Amtrak.

Adams argued planners should work not just to physically shape their cities and towns but also to untap the human potential of creativity, growth, knowledge, civic engagement, and health. Speaking to the students in the room, Adams said the nature of the profession needs to evolve. Planning schools need to better integrate with city governments and local communities. People are busier than ever before and bombarded by information, but real issues of climate change and public health require long term conversations and implementation of responses.

While planning happens incrementally, it needs larger strategic visions to guide smaller decisions. Unfortunately, local politics can veer those strategies off course. Adams said planners should be “of but above politics”. They should bring research, data, and objective opinions to the conservation. In fact, he emphasized that there isn’t enough tension between planners and politicians. Planners should ask the hard questions that irritate people in order to prompt changes for the better of communities.

Speakers from around the region presented how their organizations are working towards environmental, social, and economic resilience. Jason Biermann, deputy emergency manager for Snohomish County, Washington, described how social ties and government networks helped pull together the vast array of resources needed to respond to the Oso landslide in March 2014. No plan could have prepared the community for the devastation or the logistics of coordinating the resources of over 100 agencies. Instead, a general framework that was in place allowed the responders to be nimble and make decisions on the fly. Jeff Hortobagyi from Canadian firm Tellus Communications described how his company set up cellular service for residents and first responders within 24 hours of Calgary being evacuated during the 2013 Alberta floods. Flexibility and contingency should be built into other planning processes.

Steven Whitney of the Bullit Foundation declared nature is infrastructure and should be utilized as such. He described the efforts of the Puget Sound’s Regional Open Space Strategy (ROSS), a collaboration across political boundaries to protect vital ecosystem services. He said officials and experts need to decrease government fragmentation and work together as a region to better protect forests, watersheds, air quality, and the other natural systems that support human habitation. Northwest cities are intricately linked with their surrounding rural areas that produce energy, materials, and food. ROSS is building an online tool to get more citizen participation.

Similarly, the Pacific Coast Collaborative is striving for economic resilience with an agreement between Alaska, British Columbia, Washington, Oregon, and California signed in 2008. The member jurisdictions are interested in a unified response to climate change that protects infrastructure, especially that of ports and industries. The collaborative is also working on visions for high speed rail and the implementation of a regional electric vehicle network. Moura Quayle from UBC said the public employees working on such cross-boundary projects cycle through less often than politicians, so they can ensure longer lasting intergovernmental relations.

Through May 29th Vancouver voters are deciding on a major transportation referendum. The simple “yes” or “no” vote decides whether a 0.5 percent sales tax will be enacted; it would accumulate $250 million (US $198 million) per year for a package of transit investments, including bolstering bus and light rail service, extending light rail lines, rebuilding a major bridge, repairing roads, and other congestion relief measures. The region is expecting another one million residents and 600,000 jobs by 2045, and the goal by then is to for 50 percent of daily trips to be by walking, bicycling, and transit.

[Since the original posting, the referendum failed by 23 points.]

The referendum was spurred by a $3.3 billion 10-lane project opposed by elected officials and environmental groups; more such projects would be justified without adequate transit funding. Opposition to the transit referendum has come from anti-government residents who point to the lack of accountability at the region’s transit agency, Translink.

George Benson, a planning student at UBC, has been working to get his fellow students to vote. He told me, “It has been gratifying to see people my own age come out in favour of transit boisterously, but of course, with current turn-out rates, especially in a mail-in ballot, we’re going to need more than that. The work that we’ve been doing at SCARP and UBC has been to reach out to as many young people as possible and make the urgency of this vote as clear to them as possible – this is their future that is at stake.”

Gordon Price from Simon Fraiser University, who narrated the above video, moderated a panel of transportation officials at the symposium. He said passage or failure of the referendum is equally plausible and either decision will have enormous impacts on Vancouver. He supported Translink, who have come through before with their plans, and whose buses and trains are bursting at the seams with riders. He said many issues are at stake: health and quality of life, protection of the environment, housing affordability, and cutting road and transit congestion.

The Role of the Bike Network

On my last visit, I walked a good portion of the downtown and surrounding neighborhoods, and I was impressed with the comprehensiveness of the pedestrian network. This time I was able to experience the region’s bicycle infrastructure straight out of the train station to the hotel. George, from UBC, also told me bikes are a big part of the referendum but not a big part of the conversation: “Biking can be quite divisive, because of a small, vocal minority that dislikes them. I think the campaigners have been pretty strategic about that. When you look at the City of Vancouver’s mode-share goals, they definitely want to continue to see cycling increase in the medium to long term.”

I made ample use of the city’s off-street, greenway, and protected bike lane network and its integration with transit. I was able to easily bike from lunch to the convention center and cruise ship terminal, which are built on massive piers with wraparound public promenades that offer panoramic views. Later, I circumnavigated the large Stanley Park on the shoreline trail, and the next day biked all the way to the UBC campus along English Bay. On the return trip, it was easy enough to load up on a bus. During the final day I found it was convenient to bike onto the light rail cars, which have wall brackets that enable the bike to stand up instead of hanging from a hook.

I also took a Seabus ferry across the Burrard Inlet, expecting to wander around the city of North Vancouver for a bit before heading back. But I found a bike lane and was drawn further through town until I decided not to turn back. I found myself along a comfortable network of trails skirting a heavy industrial area and accidentally trespassed on a film lot. Eventually, I found the Ironworkers Memorial Bridge that and crossed back over to Vancouver and returned to downtown via residential streets.

Many lessons can be taken from symposium and my brief time in Vancouver. I’ll narrow it down to one: be bold. Planners, urbanists, and students must take confidence in their views on livable cities and project those ideas to those who make the big decisions. Those of us in the Pacific Northwest share many of the same values, with perhaps the most basic being environmental stewardship and a desire for long term sustainability. The most pressing issue of our time is climate change; by working with each other and our elected leaders, we can get the transportation infrastructure, housing diversity, energy sources, and governmental collaboration we need to ensure Cascadia remains a viable and vibrant place to live.