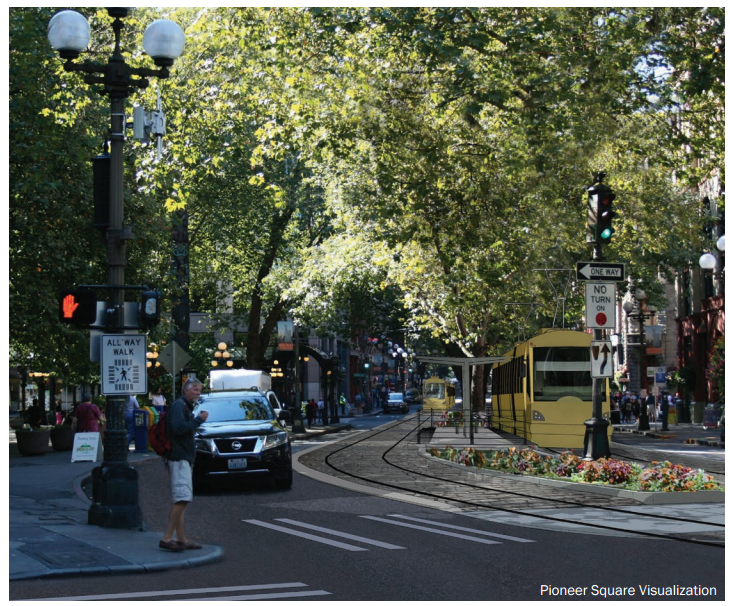 Seattle is a city of two streetcar lines separated only by a wall of towers. One corridor stretches from the north edge of Downtown to the burgeoning techno-hub of South Lake Union, and another slinks its way from Capitol Hill to Pioneer Square via the city’s medical district in First Hill. Recognizing that the utility of these lines could be further enhanced, the City eventually plans to connect them in a project known as the Center City Connector.

Importantly, the 1.2-mile rail segment would get its own exclusive right-of-way to ensure that trains move freely instead of getting stuck in general traffic. The City also wants to help out with increased speed and reliability by giving streetcars transit service priority at stoplights (i.e., quicker green lights). On First Avenue, streetcars will be placed in the middle of the street keeping them away from turning vehicles and other obstacles that could present delay.

These are all great features, but even at the highest planned frequencies — trains every 5 minutes — there appears to be extra capacity left over for other uses. This resource could be used to enable a number of other future transit projects, which could allow faster crosstown connections through Downtown. 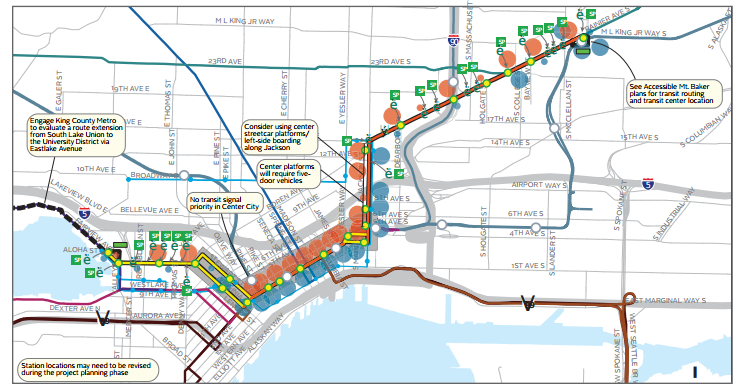 A number of options are available to make better use of this corridor, but one that quickly comes to mind is the proposed RapidRide+ corridor proposed on Rainier Avenue. This route is essentially the northern portion of King County Metro’s Route 7 (north of Mount Baker Station).

As proposed, the Rainier Avenue route would partially run along potentially shared transit lanes on Jackson Street. These are the same general purpose lanes used by the First Hill Streetcar line. Sharing lanes with the First Hill Streetcar through Pioneer Square and the International District could radically reduce the travel time across the corridor for riders.

Going further, the City could look toward the future Center City Connector route, which will have exclusive transit lanes in the middle of First Avenue. Switching the Rainier Avenue RapidRide+ route from Third Avenue to First Avenue would be a fairly simple task, so long as the buses were equipped with additional doors to allow center platform boarding. These kind of buses are already proposed for other routes, including the proposed Madison BRT line.

And in fact, the Seattle Department of Transportation has already expressed interest in running the Rainier Avenue RapidRide+ route in center lanes along Jackson. The only major obstacle would be stringing new bus wire on First Avenue where no bus wiring currently exists. One would hope that the City could reuse some of the infrastructure (though not the wire) for buses that will be built for streetcars, but that is unclear at the moment.

Though the value of modern streetcar transit service is often hotly debated, one can hardly argue against a transit mode that comes with exclusive right-of-way. The City Center Connector will come with exclusive lanes, and so it seems natural to wonder if extending those exclusive lanes further north would be a worthy experiment. Indeed, First Avenue is not any more narrow through Belltown than it is through the rest of Downtown, and Belltown may be cut out of the next light rail expansion, so it would be a pretty strong candidate for an express streetcar connection to cover the gap. Such an extension has even appeared in multiple SDOT plans, including the Center City Connector, and some Sound Transit studies for rail service between Ballard to Downtown. 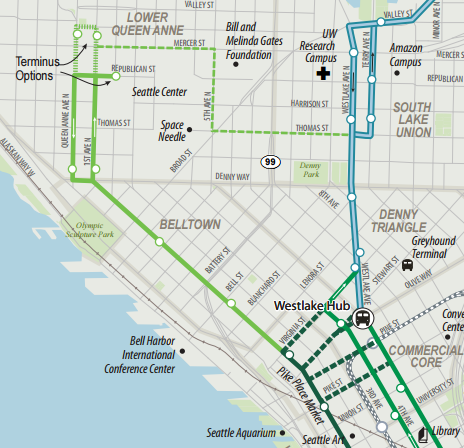 If we want to connect Belltown to the rest of our high capacity transit network, and we have decided to not spend the money necessary to extend our light rail system directly to Belltown, a rapid streetcar as surface mitigation seems like it would be a very viable alternative.

Beyond options to extend a streetcar further north on First Avenue, there are additional options that may be worthy investments, including:

In addition to the ideas listed above, there are a few ideas that could further building upon the First Avenue exclusive transit lanes and create a larger system.

In the days of yore, Queen Anne Hill was served by cable cars operating on the counterbalance system. Similar to an elevator, the system had weights connected to cables, which pulled streetcars up and down the steep hill. While gone today, this counterweight system is still buried under Queen Anne Ave N, and though it’s probably not possible to reactivate this system as-is, a modern equivalent could be built with retrofitted streetcars in our existing fleet to allow us to serve Upper Queen Anne with streetcars again. Since this part of Queen Anne is not expected to get light rail in any of Sound Transit’s proposed Sound Transit 3 expansion plans, this is one of the few options that might actually bring express rail service to the top of the hill.

Many have suggested a variety of ways to make improve the speed and reliability of light rail through the Rainier Valley, especially to points south of Seattle. One option that has been routinely proposed is bypassing the area altogether with a new route through SODO and over the Duwamish River. But another option could better directly serve Rainier Valley residents and expedite longer distance travel, and that’s an elevated segment of light rail:

The elevated option would certainly be more reliable as it would avoid collisions common along the corridor, faster since it doesn’t operate at-grade, and could have fewer stops meaning that dwell time and acceleration would play less of a role in delay.

Of course, these changes would only be ideal if local rail service were maintained. It’s entirely conceivable that the elevated line would be placed next to or above the Martin Luther King, Jr Way S right-of-way and leaving the existing at-grade rail intact. The existing line could be repurposed to streetcar rail and easily connected (after replacing the overhead wires to support streetcars) to the aforementioned Rainier Avenue streetcar option. This would create a single, express streetcar line that might run from Queen Anne all the way to the south end of Martin Luther King, Jr Way S, where building new streetcar facilities would not be terribly difficult. And, light rail could become an express service in the corridor.