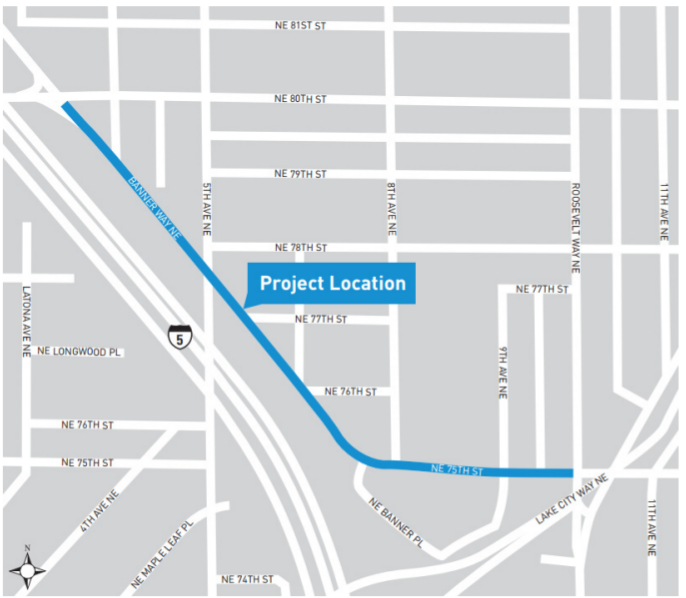 A few weeks ago, the Seattle Department of Transportation (SDOT) held an open house to discuss improvements on the section of Banner Way NE between NE 80th St and Roosevelt Way NE. The meeting was framed as a discussion to consider various safety improvement along the corridor, similar to the successful NE 75th St safety redesign that was done in 2013. Banner Way NE is the classic Seattle overbuilt four-lane road that is well within the recommended traffic volume range for a road safety corridor redesign. While these safety improvements are needed, so far this project has had a frustrating lack of details, outreach has been incredibly poor, and is an example of Seattle’s poor transportation planning.

The meeting focused on general collision data, traffic volumes, speeds, and potential alternative roadway stripings. According to SDOT, traffic volumes on Banner Way range between 22,000 and 24,500 vehicles per day. And under agency guidance, a road safety corridor redesign is typically recommended for streets that have volumes of less than 25,000 vehicles per day, meaning that it could be a candidate. SDOT staff also provided other metrics. For instance, the posted speed limit for the street is 30 mph, but southbound drivers have an 85th percentile speed of around 36 mph, and the majority of collisions occurred at the slip lanes of Banner Way NE & NE 80th St.

While this is a welcome project, the biggest and most obvious problem with it is that it’s yet another potential safety island in an unsafe network. The NE 75th St corridor redesign extended from 15th Ave NE to 35th Ave NE, yet this safety project’s eastern terminus is Roosevelt Way NE. That leaves the worst part of this segment (between Roosevelt Way NE and 15th Ave NE, a full four blocks) unchanged. This section also sees a relatively heavy amount of bicycle and pedestrian traffic, thanks to the Safeway located there. But if that isn’t enough, it’s also the section where the most pedestrian and bike collisions have occurred.

During the meeting, SDOT informed the community that funding for the safety project is coming out of the City’s bike and pedestrian funds. It would also be a very low-cost project, consisting of mostly changes to paint. This seems a bit odd, given that the recently passed Move Seattle levy, which includes $320 million over 9 years to complete numerous safety corridor projects. It’s also unacceptable that a project using bike funds like this wouldn’t connect to the existing bike lanes a few blocks away on 12th Ave NE or NE 75th St.

But if that weren’t enough, outreach for this project has been terrible. People who live near the project area received a postcard notification the day before the open house meeting (many of who were at the meeting and expressed great frustration with the lack of notice). But for those who couldn’t make it, there’s another chance to talk with SDOT staff about the project. A walk-and-talk is scheduled for today (Wednesday, April 20th) at 5.30pm, at the intersection of Banner Way NE & NE 80th St. You’d be forgiven for not knowing about this meeting though – it’s not even on SDOT’s Banner Way project webpage.

The NE 75th St road safety redesign project was a massive safety improvement. After its completion in 2013, I was told by people within SDOT that outreach would begin in 2014 to continue the road safety corridor redesign in both directions. It’s incredibly disappointing that after passing a billion dollar levy with a huge Vision Zero focus, we’re getting just a small portion of what was planned. That portion skips the most dangerous portion of this corridor for vulnerable users; it isn’t even close to being enough. Please show up to today’s walk-and-talk or submit comments to SDOT to let them know that you want more.