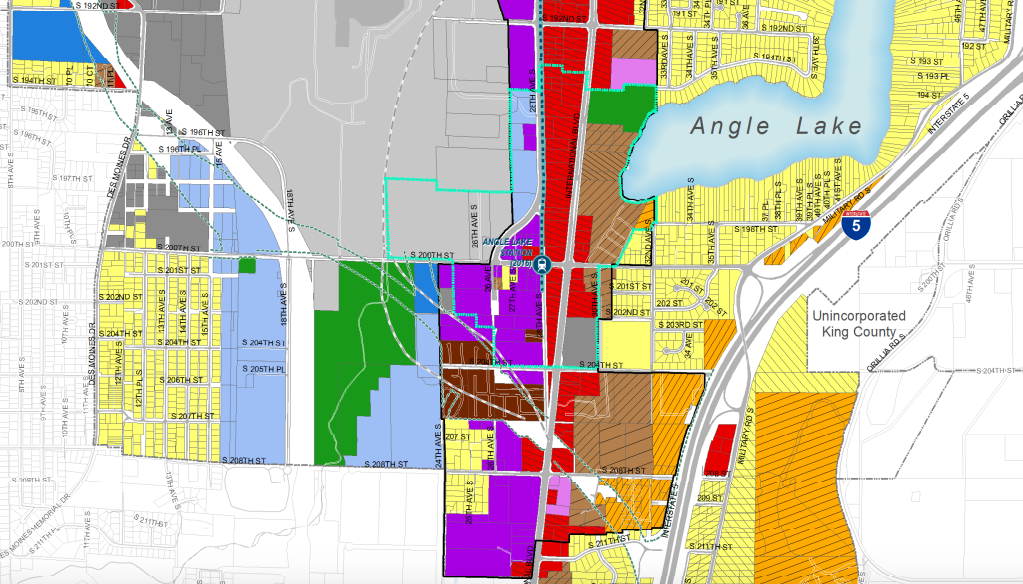 I was going to include a SeaTac zoning map in my story on the Angle Lake Station—which opens later this month. Unfortunately, the SeaTac website was down that Sunday night—so no zoning map. Belated as it might be, here’s the map and it shows that SeaTac has some dense zoning near the station. In fact, the City of SeaTac pushed out a major station area plan as recently as July, making moves to increase development capacity further. That’s noted by the sea green lines delineating the provisional station overlay district.

Some of the densest multi-family zoning (UH-900) translates to about a maximum density of 48 dwelling units per acre and allows up to five floors of height (55 feet). Developers, however, could snatch up an additional 30% in density and get extra height if they preserve historic structures, build affordable housing, or contribute toward park space. Meanwhile, many of the commercial zones have no upper maximum on residential density and height is primarily governed by fire code regulations and FAA air space requirements. In other words, SeaTac is allowing a decent amount of density which will hopefully entice some multi-family and mixed-use projects.

The Port of Seattle owns a sizeable tract of land west of the station that they apparently plan to develop in a commercial-, office-focused way but also pedestrian-friendly way. Sound Transit also seems to have some surplus land and apparently the City of SeaTac owns a plot just south of Angle Lake Park. So collectively, these public actors could have a big hand in shaping the physical environment over the next many years. Strip commercial, hotels, and a self-storage facility hold good chunks of land north and south of the station, most of which are in bad shape. Those seem like obvious pickings for new life.

Notice in the map below how the SeaTac planners bowed to Washington Department of Transportation’s (WSDOT) harebrained scheme to blast an SR-509 extension through the walkshed, residences and businesses southwest of the station. Troubling, but it’s just a map. There’s no guarantee that SeaTac residents will so easily acquiesce to these fevered highway engineer dreams. The Port of Seattle might also have something to say about hemming in the airport. From an urban design perspective, it’d be hugely counterproductive to place a large freeway chasm within a light rail walkshed, which is precious real estate within sprawled-out Greater Seattle where neighborhoods that have great all-day transit access are few and far between. That land would better used for people than for cars.

Finally, above is what Angle Lake Station looks like from a recent satellite image. There’s plenty of potential to be had from infill development and redevelopment in the years ahead on this relatively blank, parking-cratered canvas.