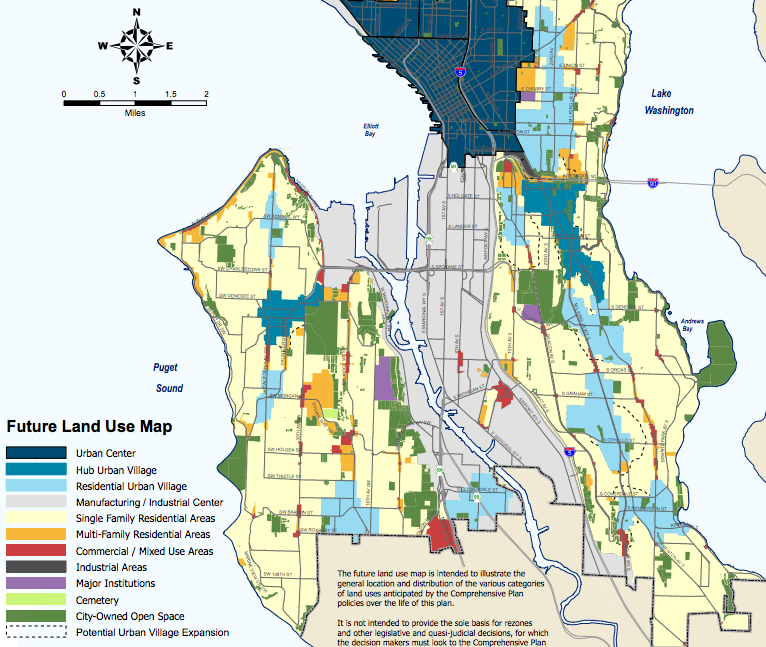 The Seattle City Council will hold a public hearing on the major update to Seattle’s Comprehensive Plan. Better known as Seattle 2035, the drafted plan represents the City’s priorities covering the next 20 years. Councilmembers have had extensive discussions on the Mayor’s Recommended Plan through individual briefings across most of the standing committees. The Planning, Land Use, and Zoning (PLUZ) Committee has also held more than a half-dozen formal meetings since May. Last month, the PLUZ Committee identified 13 high level policy issues to address and provided direction on how they should be tackled.

In a meeting last week, the PLUZ Committee retraced some of their steps on amendment proposals to the Comprehensive Plan, but focused most of their attention on five primary topics, including:

In particular, Councilmembers had robust discussions on the proposed Community Involvement Element and commercial affordability policies. Council Central Staff followed up discussion by raising some past issues that the Committee had previously been briefed on. One of the primary issues still remaining is how the Future Land Use Map (FLUM) should be addressed.

The Future Land Use Map Question

In drafting the Mayor’s Recommended Plan, the Office of Planning and Community Development (OPCD) proposed a suite of changes to the FLUM, including mapping tentative areas for urban village expansion and coloring in urban villages and urban centers. Those changes were put forward in the final version of the Mayor’s Recommended Plan, but OPCD won’t have final recommendations on where urban villages should be expanded until sometime next year, in large part because OPCD still needs to complete the process of soliciting community feedback on where to draw the lines.

The PLUZ Committee decided that it would be in the best interest of the City to not move forward with mapping fuzzy urban village expansion lines as part of Seattle 2035. Some of the reasons should be fairly apparent. For one, drawing lines now could create an expectation for property owners to be included in an urban village expansion. For another, it could fuel increased property speculation and solicit undue excitement by the public when no final decisions have been made.

In terms of changing the colors on the FLUM, the PLUZ Committee had indicated support for only adding cemeteries as a unique land use in August. Urban villages, however, would not be “painted” in with the blue tones that OPCD had included as part of the Mayor’s Recommended Plan. This presents a significant technical challenge for the Mayor’s larger Housing Affordability and Livability Agenda (HALA) process, which is intended to include Mandatory Housing Affordability (MHA) rezones next year.

Last week, Tom Hauger, a senior planning staff member of OPCD, explained the issue to the Councilmembers in this way:

The real idea behind “painting” the urban villages was to indicate that the urban villages and the urban centers are really expected to be different places than the areas outside them. It was to show the intention that these places are likely to be the most dense places in the city and they’re also the places that we’re going to see a wider mix of uses–multi-family housing and commercial use–and in concentrations that aren’t found outside of them. They also may have an effect on future zoning changes because there will no longer be a need to change the Future Land Use Map to effect a rezone within an urban village if they’re all “painted” the same color.

Having said that, however, current policy in the Comprehensive Plan says that the colors on the map–as it exists today–are intended to be generalized areas and not specific boundaries. And that a change to the Future Land Use Map is only required if changing a large area and allowing significant change in use. And so rezones can already occur without a Future Land Use Map amendment. So the “painting” of the village doesn’t really do much in that regard, but it does signal the City’s intention more clearly how these areas are intended to be treated different.

It doesn’t not change any zoning directly and it’s accompanied by new policy that [is] in the Mayor’s Recommended Plan that more specifically say[s] what we’re expecting in terms of heights, scale, and density in each village type and new policy that also says that heights should taper down within the village toward the outside of the village. So, I think it gives more direction than we’ve given in the past about how we make those decisions about what occurs within the villages.

Following on, senior planner Patrice Carroll gave a little more background on why OPCD had proposed the FLUM changes in the first place:

In concluding the discussion, both Councilmembers Rob Johnson and Lisa Herbold expressed an openness to take another look at the issue in order to better understand the ramifications of pursuing various policy paths.

The public hearing on the Comprehensive Plan will kickoff at 2pm on Thursday (September 15th). Individuals who wish to provide public testimony are advised to sign-in. The Clerk will have a sign-in sheet available as early as 1.45pm. Councilmember Rob Johnson, Chair of the PLUZ Committee, is also taking feedback directly and sharing it with his colleagues. If you have any priorities that believe the City should pursue, now is the time to share them with the City Council.