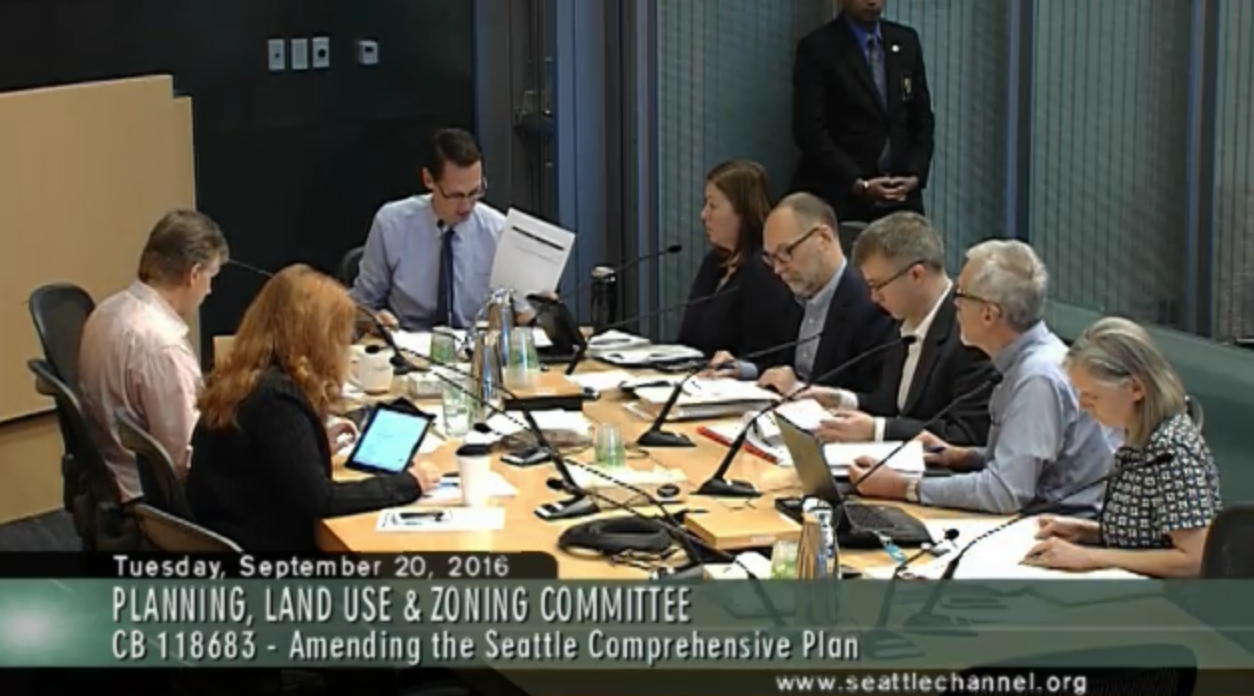 The Planning, Land Use, and Zoning (PLUZ) Committee met for the eighth and final time yesterday to discuss and vote on Seattle 2035–Seattle’s new Comprehensive Plan. The Committee passed 190 amendments to the Mayor’s Recommend Plan in four primary areas:

The Committee adopted a package of 152 technical amendments that had been reviewed on or before the September 9th meeting. These amendments were generally minor in nature and not the subject of extensive scrutiny during the deliberations. Examples include updated maps, added definitions, improving readability, and making targeted changes to strengthen proposed policies. In some cases, of the policies would be stricken from the Mayor’s Recommended Plan.

At the September 9th meeting of the PLUZ Committee, Councilmembers still had a few policy questions remaining on mostly-settled amendment topic areas, which had generally been introduced as key policy decisions. There was a desire for further revision on some of the proposed policies, including industrial lands policies, the definition of transit service, the 10-/20-year housing goal of the Growth Strategy, commercial affordability, municipal broadband, and cultural and historic preservation policies.

Language below underlined in red are further amendments since the September 9th meeting while plain underlined language was the original amended text at that meeting.

The 20-year housing language for the growth distribution discussion in the Growth Strategy Element was further amended and adopted:

This Plan anticipates that over the next twenty years, Seattle will add 70,000 housing units and 115,000 jobs. These estimates represent the city’s share of King County’s projected twenty-year growth. Seattle’s comprehensive planning to accommodate this expected growth works from the assumption that the estimates for growth citywide, in urban villages and in urban centers are the minimum we should plan for. The city will monitor various aspects of growth over time and respond with adjusted approaches if growth significantly exceeds the estimates.

A previously proposed displacement policy was further amended and adopted:

H 2.6 Seek to identify affordable housing at risk of demolition and work to mitigate the displacement of residents ahead of planned upzones.

A minor adjustment was made to a new policy for the Parks and Open Space Element concerning lidding:

P 1.17 Create innovative opportunities to use existing public land, especially in the right of way, for open space and recreation, including street plazas, pavement to parks, parklets, lidding of reservoirs and highways, and community gardens.

The language of municipal broadband did not change over previous meetings, but it was reconfirmed at yesterday’s meeting by Councilmembers. The policy would be added to the Capital Facilities Appendix as a discretionary project of the City:

The Lid I-5 coalition successfully lobbied, in party, to get enhanced language to be restored to the Transportation Element:

T 3.11 Look for opportunities to reestablish or improve connections across I-5 by creating new crossings enhancing streets where I-5 crosses overhead, or constructing lids, especially where these can also enhance opportunities for development or open space.

A new displacement mitigation policy would be added to the Housing Element:

An environmental and social justice amendment would be added to the Environment Element:

EN 2.7 Work to identify and reduce flooding through improvements to drainage and wastewater systems and reductions in impervious surfaces and runoff, particularly in traditionally underserved areas.

A social justice amendment would be added to the Community Well-Being Element:

Some key policy decisions previously discussed by the Committee were unsettled. Further refinements and policy changes were made in four topic areas.

The first remaining policy decision was on the new Community Involvement Element. Councilmembers had identified outstanding issues with the draft version of the new Element that would consolidate the City’s approach to inclusive and equitable community involvement as well as community and neighborhood planning.

Added to the proposed Element included some of the following:

CI 1.3 Build community capacity for meaningful and authentic community involvement, enhance the ability of community members, including those of marginalized communities, to develop the knowledge and skills to effectively participate in planning and decision-making processes.

CI 1.8 Seek to reflect of the diversity of the city in the membership of city-appointed boards and commissions.

CI 2.7 Collaborate with the community to implement community plans.

In the process of making these changes, the Committee also deleted the Community Engagement section of the Growth Strategy Element, including Goal GS1 and Policy GS 1.1 through GS 1.10, and the Neighborhood Planning Element since they were redundant to the new Community Involvement Element.

The Committee decided to make targeted changes in the Growth Strategy Element in order to revise intended growth estimates in urban villages. The purpose was to focus less growth in areas with high risk of displacement from increased growth pressures. To name a few, these areas constitute urban villages like Bitter Lake Village, Mt. Baker (North Rainier), 23rd & Union-Jackson, and Columbia City:

Enumerating the urban villages will provide greater clarity about where anticipated growth could go and direct City actions when it comes to neighborhood planning, such as investments and regulatory changes for land use. In tandem with this, the Committee also changed the Growth Strategy Element discussion to clearly reference the Growth and Equity Analysis that is the basis for determining access to opportunity and risk of displacement throughout the city.

Scale Of Development In Urban Center And Urban Villages

A third remaining policy decision by the Committee was what to do about the Comprehensive Plan’s direction on scale of development in urban centers and urban villages. A few revisions were proposed and adopted, including a reference to Growth Strategy Figure 1 and allowing consideration of more development capacity near light rail stations, an issue that could come to the forefront if Sound Transit 3 passes this fall:

LU 1.3 Provide for a wide range in the scale and density permitted for multifamily residential, commercial, and mixed-use projects to generally achieve the following overall density and scale characteristics, consistent, at a minimum, with the guidelines in Growth Strategy Figure 1:

In urban centers, a moderate to high-density and scale of development

In hub urban villages, a moderate density and scale of development

In residential urban villages, a low to moderate density and scale of development

The fourth remaining policy decision was on whether or not to “paint” the urban centers and urban villages with one color on the FLUM. Leaving the FLUM effectively unchanged in urban centers and urban villages would have meant that some aspects of the Mayor’s Housing Affordability and Livability Agenda (HALA) rezones associated with Mandatory Housing Affordability requirements would not have been possible.

The Committee chose to “paint” urban centers and urban villages to give immediate flexibility in the HALA process as opposed to tackling the issue in annual amendments to the Comprehensive Plan next year.

The Seattle 2035 Comprehensive Plan update process is coming swiftly to an end. The City Council will vote on a final proposal at the October 10th legislative session. Councilmember Rob Johnson, Chair of the PLUZ Committee, indicated that further amendment proposals would be welcome in the weeks between and could be proposed at the October legislative session. So it’s still possible to see further refinements.