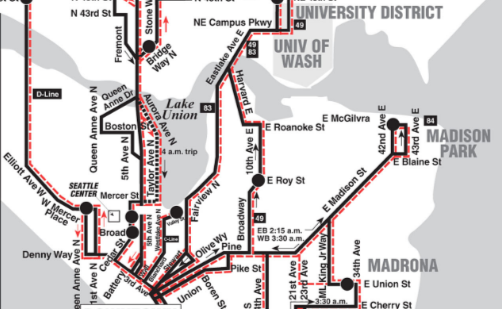 Night owl service in Seattle and places further afield is on the verge of major improvements. In April, we provided a brief on a review of the legacy night owl network, much of which predates the modern King County Metro Transit. The spaghetti routes of the 80 series would go away under Metro’s proposal and standing in for them would be the reliable all-day routes that seemingly to disappear after the clock strikes 12, which together will strengthen Seattle’s late-night bus network.

The proposal would also shower inner suburban areas like Burien and White Center with effectively all-night service for the first time and make strides in providing coverage throughout South King County. Not to miss out on the party, Shoreline would share in the gifting with even more late-night service. A few years ago, this all seemed like an inconceivable future as transit funding for Metro plunged and routes were getting the boot. On the chopping block, at the time, was the late-night bus network itself, which did take some of the cuts.

Mayor Ed Murray did step in and save the Night Owl network as we now know it, and now it is up to King County Executive Dow Constantine’s current budget to provide the Owls the funding for their sunset. It is interesting to see late-night bus service become a political football when the continuation of the frequent transit network late at night should be something everyone gets behind. We dive into what is replacing it below.

Metro is giving Routes 82, 83, and 84 the ax, but in a good way. The spaghetti monsters will be replaced by extended service on the straight and narrow Routes 3, 5, 11, 62, and 70–changes so sensible that it’s difficult to believe that the King County Council won’t kill it in some way.

The sum of these changes could not possibly be more welcome, especially because they largely match regular daytime service routings. Each of the routes replacing the 80 series would be extended to the 4am hour, meaning that the longest service gap will be about two until early morning service begins again, with most of the routes effectively becoming 24-hour-a-day service seven days a week.

Metro recognizes that service to Sea-Tac Airport is an incredibly important objective of the bus network. While late-night service runs until about 1am on Link, trips on the RapidRide A Line continue until well into the 4am hour. Metro’s proposed solution is to extend trips on Route 124 between 1am and 3.30am. Route 124 terminates at Tukwila International Boulevard Station, but under Metro’s proposal it would be extended directly to the airport to eliminate the need for transfers to the RapidRide A Line. This change won’t just be a boon to the flying public. It will also greatly improve airport workers who have late-night shifts get to and from work.

RapidRide routes would get improved service in the hootish hours with higher frequencies. Extra roundtrips after 1am would provide almost-hourly service on the C Line, D Line, and E Line, lowering the average headway of 90 to 75 minutes. Two extra late-night roundtrips would go to Routes 3, 5, 11, 62, 70, and 120, which would effectively be a net increase collectively of four roundtrips (not counting Route 120) over the 80 series or put another way nearly a doubling of service. Route 120, by the way, operates between Downtown Seattle and Burien via Delridge.

Downtown service would be better than it is today with more regular frequency for connections. The 80 series seems to bunch around the 2:15am and 3:30am time near Third Avenue and Pike Street. The proposed service changes would spread that out so that service along those streets appears every 20 to 30 minutes during the late-night hours.

The proposal isn’t all roses though. Obvious gaps would still persist in Northeast Seattle and new ones would be created. Serving areas like Ravenna-Bryant-Wedgwood, Northgate, and Lake City seem like clear priorities and could be partially accommodated by Route 70 in some fashion–but it couldn’t be done with electric trolleybuses–or Route 62 (but let’s not mangle that worse than it is now, please).

The proposed service improvements would be paid in part by Seattle’s Proposition 1 funds and new revenue from King County Executive Dow Constantine’s proposed budget. Night owl service changes are still a ways off though. The King County Council will have to grant approval and changes wouldn’t go into effect until September 2017. So another year of current sub-par service is still likely ahead. And of course, the King County Council generally likes to get in the way of the Metro planning team and a good idea. But the idea that Seattle’s late-night bus system needs to improve appears to be a well-understood one.

Metro’s long-range plan, however, is pretty light on details on how it envisions late and overnight service in the long-term. It envisions a 30% increase in service hours for “off-peak” hours like 9pm, but doesn’t say anything about 4am. Metro’s riders should demand more specifics as this plan gets fleshed out to ensure that the late-night network keeps moving forward.

You can browse the full plan below. Metro is conducing a survey that can be found here. You have until October 30th to provide feedback, so get clicking.

Metro Night Owl Proposal by The Urbanist on Scribd