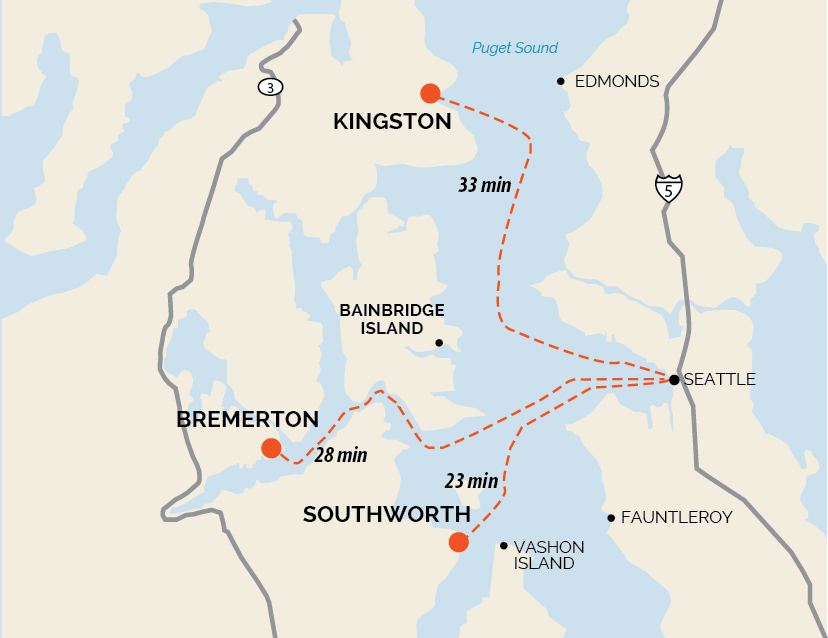 As we reported previously, if voters approve a 0.3 percent sales tax (3 cents on a $10 purchase) the plan would start with a new route between Bremerton and Seattle within six months. While this duplicates an existing Washington State Ferries route, the fast ferry would take less than half the time and be more fuel efficient. Within a few years, additional routes would open between Seattle and the unincorporated communities of Southworth and Kingston, cutting down the comparable transit commute times by about two-thirds.

Surveying indicates less than half of Kitsap County residents have heard of the plan. If recent news coverage and public forums are any indication, there is healthy skepticism. Opponents argue that the plan would benefit only a few of the peninsula’s 260,000 residents. But proponents say the service could be a boon for local economic development as Seattle workers seek affordable housing within easy reach. And one in six of the county’s employed residents (14,000 people) already work in Seattle, so the benefit would be almost immediate for current ferry commuters and it may attract new public transit passengers.

The sales tax revenue would help fund construction of new dock facilities, build new boats, and pay King County’s water taxi division to operate the vessels. Kitsap Transit already has one 118-passenger ferry ready to go, the Rich Passage I, that was built as a low-wake prototype. Washington State Ferries previously offered Bremerton-Seattle fast ferry service but ended it when their boats were forced to slow down due to shoreline erosion.

A round trip fare would cost $12, and for the first time cross-sound service will be discounted by 50 percent for low-income riders. The service would operate at least during commuting hours all year and have additional runs Monday through Saturday from May through September.