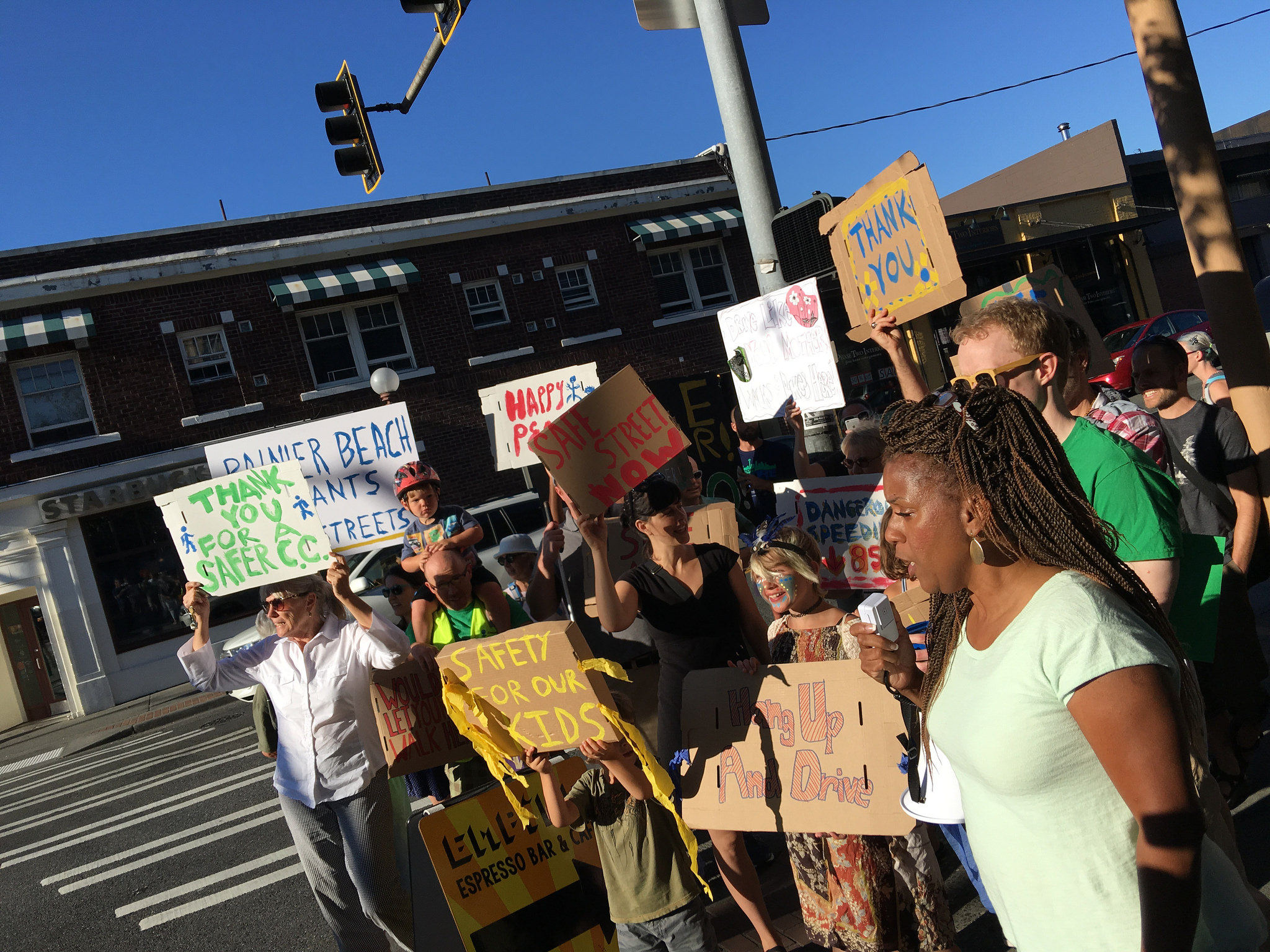 Alright you urbanist wonks, let’s chat about the Seattle Department of Transportation (SDOT) budget: what the mayor proposed, what the city council is proposing to change, and what advocates are asking for (jump to the call to action).

Every fall the mayor proposes a balanced budget, then council debates amendments to the budget and has to make it balance all over again. Currently, we’re at the stage where council is discussing potential amendments.

What’s in the Mayor’s proposed budget for the Seattle Department of Transportation (SDOT)?

The transportation budget is an explanation of how the city will spend $440 million this year in a 161-page document spread across the SDOT budget and its Capital Improvement Plan. There is a lot to digest. One quickly observable takeaway is that the Move Seattle Levy saved the department from devastating cuts – thank you Seattle voters! Two other big ticket items that grab your attention are the Center City Streetcar and the Lander St overpass.

The Center City Streetcar will cost $151.6 million (over multiple years), of which $75 million is expected from Obama’s budget. Operating costs are estimated to be $15 million per year.

The Lander St Overpass total project cost is $142 million (over multiple years), of which $69 million is expected from non City of Seattle sources.

While these two mega projects suck much of the free oxygen out of the room, SDOT is still planning to make good on its Move Seattle Levy maintenance commitments, and even fund clever new ideas such as building more sidewalks now rather than later (by borrowing from future years, not adding funds), and to hit the ground running for ST3 with $1 million for planning. And of course, bike share 2.0 has already been highlighted on this blog and elsewhere.

What is the City Council proposing to change?

The City Council is considering at least 24 different budget proposals for SDOT. They include making sure the council has a chance to weigh in on mega projects early in the design process, adding even more city funding to complete the Lander Overpass (Herbold), borrowing from future years to accelerate the bicycle master plan implementation (O’Brien), and funding a Parking District pilot (Burgess). On the revenue side, councilmembers are considering directing revenue from the red light running tickets to safety projects instead of the general fund (Herbold), increasing the commercial parking tax (Sawant), levying an employee hours tax (Sawant), and a much needed addition of one more grant writer for SDOT to help with the Move Seattle levy that relies heavily on winning grants to meet its targets (O’Brien).

The City Council is also formulating a number of improvements to the Pedestrian Master Plan update, including funding an assessment of the state of repair of Seattle’s current $5.3 billion sidewalk system (for which only a small portion has been assessed so far), being more transparent about the timeline to build safe places to walk for every part of the city, and looking into new sources of funding including Councilmember Johnson’s idea for allowing communities to fund crosswalks themselves (see SNG’s one pager about improving the ped plan through the budget).

The first is to add $2 million to the Vision Zero budget to Fix Rainier Ave S, Seattle’s most dangerous street. This summer community members from up and down the Rainier Valley and people representing the Friends of Mt Baker Town Center, the Rainier Beach Merchants Association, the Rainier Beach Action Coalition, and the Columbia City Business Association came together to say thank you for the 1 mile of Rainier Ave that has been made safer and ask the city to complete the other 3 miles. Check out the video of the rally below.  Seattle Neighborhood Greenways is also recommending the City Council add another $1 million to the Vision Zero budget to help implement spot improvements around the city, an important first step towards the implementation the safer speed limits legislation (see SNG’s one pager on the idea).

The second exciting idea coming out of Bruce Harrell’s office is to provide funding ($2 million) so that the widely acclaimed Accessible Mt Baker project can be ready to apply for major federal grants. Accessible Mt. Baker provides a major transit-oriented solution to a dangerous bottleneck that has hampered equitable development in the North Rainier Hub Urban Village. In order to effectively compete for federal grants, Accessible Mt. Baker must achieve 30% design in 2017. With this additional funding, SDOT will be in a good position to apply for a Small Starts grant in 2017, and a TIGER grant in 2018 (check out SNG’s one pager on the issue).

The third idea from Council President Harrell is to fund a transportation plan for the North Beacon Hill Town center ($150,000). The North Beacon Hill Urban Village and light rail station area have significant mobility and safety needs that have been identified by the community and by SDOT. All agree the next step to resolving street conflicts is a multimodal transportation plan. This plan will allow several critical Beacon Hill safety projects to move forward. A robust plan will also help leverage contributions from the significant private development that is expected with the HALA upzone (check out SNG’s one pager on the issue).

What can you do? Let City Council know your budget priorities! The city council is deciding what proposals will survive over the next couple of days so act now!

Here’s an urbanist’s cheat sheet for the budget as recommended by Seattle Neighborhood Greenways and Cascade Bicycle Club:

1st: Call Tim Burgess, Lorena González and your district councilmember. Use the urbanist budget cheat sheet above to tell their staff (or leave a message) what is important to you.

Thank you for taking action to improve the city’s transportation budget!