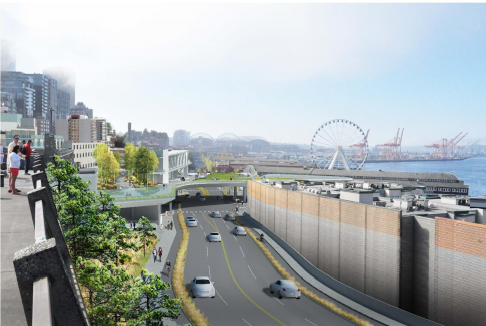 Two groups have filed appeals against the City of Seattle’s Final Environmental Impact Statement (FEIS) for the Alaskan Way, Promenade, and Overlook Walk (AWPOW). The Alliance for Pioneer Square, a group dedicated to preservation efforts of the neighborhood’s historic district, and Seattle Historic Waterfront Association, which represents waterfront businesses and property owners, filed the appeals in opposition to the City’s recently released FEIS that details a preferred alternative for redesigning right-of-way along Alaskan Way once the Viaduct is removed.

The proposed roadway design could include up to eight or nine lanes to accommodate queuing near the Colman Ferry Dock, on-street parking, bus lanes, and general purpose lanes, in addition to the associated waterfront promenade and public open space improvements. Many urban advocates have argued against such a wide streetscape for vehicles and instead for a larger public realm dedicated to open space or other uses.

In a statement, the Alliance for Pioneer Square said:

The current proposal replaces the Viaduct with an eight to nine-lane highway, with 600 buses per day. The approach guarantees gridlock that will permanently cut off much of Seattle’s historic Pioneer Square neighborhood from Seattle’s waterfront and creates an unfriendly environment for pedestrians and cyclists. The Alliance advocates for the waterfront project’s original goals, two of which are, “create a waterfront for all” and “reconnect the city to its waterfront.”

The Alliance for Pioneer Square; on behalf of residents, workers, and visitors; urges the city, county, and state to seriously consider alternatives that will reduce bus volume and the number of lanes on the new Alaskan Way south of Columbia Way. Taking action, such as redirecting buses heading into downtown Seattle to the Lander Street overpass or implementing tolling technology to reduce ferry queuing needs, would have a direct positive impact on the functionality of the street.

“We want to be clear. We are not trying to delay the new waterfront park and regret having to take this step,” said Leslie Smith, Executive Director of the Alliance for Pioneer Square. “But we must ensure that this really is a waterfront for all. It is unfortunate that the current design gives Pioneer Square an eight lane highway and will create less access to the waterfront than we have today.

“We have one chance to get this right,” Smith said. “The current plan puts an undue burden on the residents, businesses, and visitors to Seattle’s historic first neighborhood. An alternative that shifts traffic to other parts of the city would create some needed balance and truly allow us to have a waterfront that is accessible to all.”

Environmental documents are required to lay out an analysis of reasonable alternatives and to identify mitigation to reduce the adverse impact of the projects. However; the FEIS failed to do either. Once completed, the new Alaskan Way must serve a variety of users: Metro transit, ferry traffic, freight accessing the Port of Seattle, general purpose drivers, pedestrians, and cyclists.

Meanwhile, the Seattle Historic Waterfront Association focused mostly on parking issues and accessibility for visitors in their objection to the proposal.