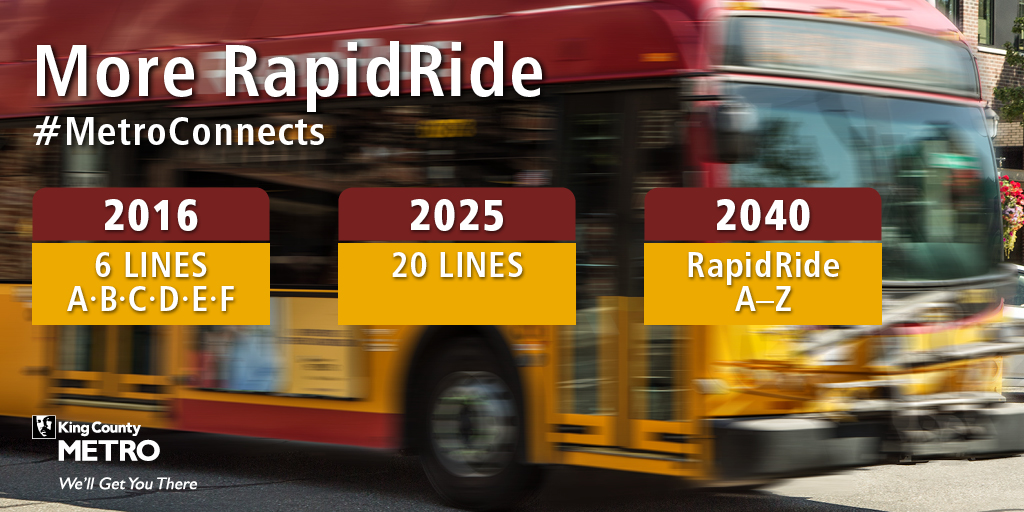 The long-range plan for King County Metro Transit has been approved. On Monday, the Metropolitan King County Council adopted the 25-year plan, Metro Connects, as a guiding policy framework for the evolution of Metro. The plan is a necessary piece to accommodate future growth in King County over the coming decades. In the next 23 years, the Puget Sound will grow by one million residents and some 800,000 jobs. Transit will pick up that slack by carrying more than one million daily riders in King County by that time. Through 2040, Metro will grow to provide:

While the Metro Connects plan places an emphasis on increasing frequencies on routes and adding new RapidRide corridors, it also plans to deploy significant investments to benefit all of its service lines whether they be frequent, express, local, or RapidRide services. To illustrate this, Metro has a useful graphic to explain what types of improvements will be made to each corridor type and the resulting time savings that could come from them:

Another dimension of the plan is how service will be designed. In the densest corridors with many destinations, service on corridors could run at least 20 hours per day with frequencies as high as once every five minutes during peak periods. The corresponding type of stop spacing would depend upon whether it were a RapidRide or standard local frequent route, meaning that stop spacing could be less than or greater than a half-mile. Juxtapose that with lower density and hard-to-serve hours: the highest frequencies achieved might be one bus every 30 minutes with service running only 18 hours per day. Considering today’s baseline services, the proposed span of service and frequencies would still be far and away better on most routes. The likely result of these service improvements would be greater reliance on transit by riders as a means to carryout their daily lives rather than just a commute-to-work or commute-to-a-game exercise.

Metro is going all in on RapidRide with 20 additional lines coming online by 2040, bringing the total to 26. Early deployment of 13 new RapidRide routes are planned for roll out by 2025, and a further seven will following on during the last 15 years of the plan. All of those routes plus the existing six are slated to meet the international bus rapid transit (BRT) bronze standard or better. That means Metro will need to make substantial upgrades to most of the routes to achieve the goal.

They will have assistance with this from the Seattle Department of Transportation, and from Sound Transit. Funding sources like the Move Seattle levy and ST3 will contribute to funding improvements along future RapidRide corridors, with Madison being the first corridor likely implemented.

The RapidRide network will serve most key urban centers and cities across the heart of urban King County with the bulk of the lines running to and through Seattle. A strong emphasis on RapidRide in Seattle will be placed on routes in the central and northern quadrants of the city. But the light rail lines in Southeast Seattle and West Seattle will help fill in what would otherwise be considered gaps.

While express bus service will see increases in service hours, the number of express corridors will gradually be reduced. That’s largely because all-day frequent service and light rail will offer superior replacements to routes like the 76, 316, and 355. However, some routes like the 143 and 309 might continue to live on in one form or another.

Seattle will reign supreme with the most complete bus network in King County. Almost all all-day routes will meet the frequent standard with a significant bulk made up from RapidRide. The further reaches of Seattle, however, will have a more basic bus service standard with less frequent routes. In other parts of urban King County, RapidRide will function as the main network backbone with lesser frequent routes and basic routes filling in the gaps. The degree to which the transit network holds together in those areas really depends upon the closeness of urban nodes. Parts of the network east of Renton and Kent quickly become very barebones with infrequent routes, but a visible network nonetheless.

The Metro Connects plan covers a lot of territory. In addition to the meaty pieces we highlighted, the plan also speaks at length on topics like transit-oriented development, fleet goals, sustainability objectives, customer communications, and boarding and fares reform. The breadth of the plan and its trajectory should largely improve the quality of public transit across King County by making it more convenient, reliable, and accessible for all.

King County – Metro Connects Plan by The Urbanist on Scribd