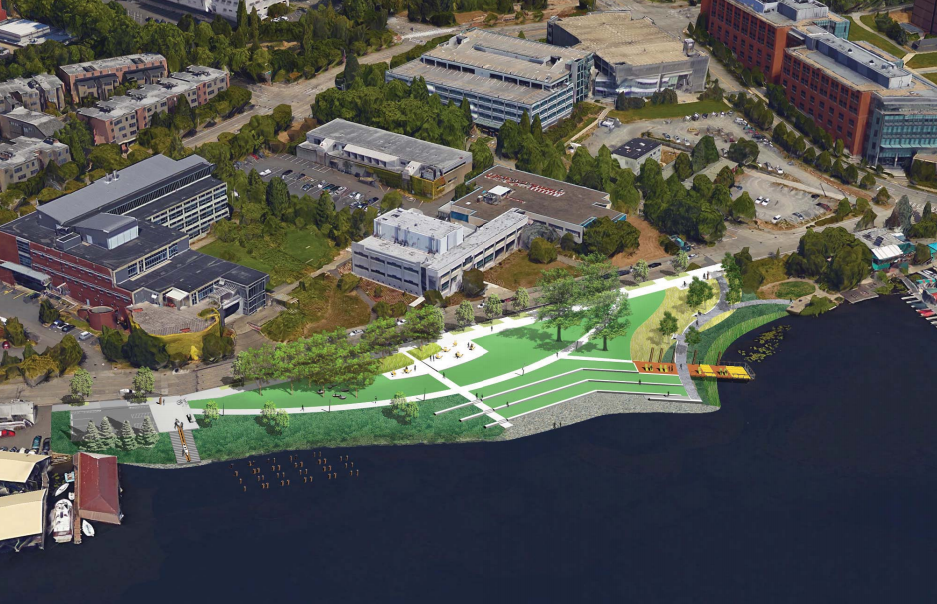 The University District is on track for a new waterfront park by late next year. Portage Bay Park will build upon Sakuma Viewpoint, a University of Washington-owned public space, next to Agua Verde. The 90% design proposal was presented to the Seattle Design Commission (SDC) in early January, garnering unanimous approval from the Commission based upon the proposal. One major change, however, was made to the proposal since the autumn.

Seattle Parks and Recreation (SPR) has backed off plans for a pavilion near NE Boat St–at least until funding can be secured for that project element. SPR was in a pickle given total project financing available, meaning that choices between competing priority park features needed to be made, either to be rationed or deferred. In this case, however, constructing a pavilion now would come at the cost of a high quality pier planned for the project. Given that SPR has one good shot at building the pier within a heavily protected shoreline environment, the wise decision would be to build one that will stand the test of time and serve as a primary asset to the park–a pavilion could always be constructed later; that’s the choice SPR is proceeding with. SPR did, however, present an option for pavilion to the SDC–what it calls an “add alternative.”

Conceptually, SPR would construct a pavilion that provides bathroom facilities and leisure amenities for patrons like hammocks or swings. The pavilion would be largely open on all asides, except for the bathroom area that would be enclosed by high quality white cinder blocks. The roofing of the structure would be somewhat undulating with a translucent covering to provide passthrough light and ribbed with reclaimed wood crossbeams. The SDC was supportive of the option, but added a condition that if SPR were to secure funding for the pavilion, the project would have to return to the SDC for approval.

Setting aside the pavilion, the 90% design closely mirrors the one presented in the autumn. The park will have three piers, with one serving as a kayak launch point. A small beach will be constructed, allowing visitors to wade into the shoreline environment. The space will be programmed in a variety of other ways with active recreation opportunities in the meadows and passive recreation in the lawn terraces, main pier, and picnic area.

The 90% design provided significant clarity in the utility of spaces, species and profile of landscaping, interpretive concepts of local history, and the types of materials to be used on features like the main pier and pathways.

From the rendering below, designers Walker/Macy have highlighted three key gateways experiences that visitors to the park will be drawn toward: the hand-carried boat launch area, picnic terrace area, and Sakuma Viewpoint area. Each of the these gateways will be designed as unique experiences:

For the site interpretive strategy, SPR plans to focus on two key aspects: local Portage Bay and maritime histories. Both histories are very relevant to the site given that Portage Bay has seen significant evolution over the past 100 some years. Before Montlake was dredged, the bay formed a lake disconnected from both Salmon Bay and Lake Washington. Hence the term “portage” in Portage Bay, which literally means “the carrying of a boat or its cargo between two navigable waters.”

The boat connection serves as a strong intersection between Salish tribes–who used canoes for local transportation–and the site which once served as a Chris Craft dealership. It’s no surprise then that the site will also feature a kayak and canoe launch and contain maritime-like aesthetics and materials throughout.

One of the strongest focal points of the site will undoubtedly be the main pier. The space will be wide, intercepted by an arcing path, and stretch out into the bay. Five decorative posts made of reclaimed wood will jut out of the hardwood deck to draw attention to the space. Perhaps harkening a totem-like or rustic maritime feel, the posts will also serve to frame the pier visually and elicit varying reflections from visitors. SPR has sought permits allowing the pier to be 90 feet long, but the Walker/Macy plans show it as 45 feet long. The fully built pier, however, will be somewhere in between and otherwise match the rendered design.

Sticking with the maritime and water-oriented themes, furniture will be reflective of those contexts. Timber could be used in the lawn terraces, flat rock-like stone seats and wooden-backed benches could be used at targeted locations, and deck chairs for enjoying sunnier days.

An important context for this park is its neighborhood. The waterfront location is within close walking distance from the heart of The Ave, University of Washington western and central campuses, and local residential areas of the University District, making it a fairly accessible neighborhood park amenity. The space, while only 3.58 acres, could benefit from parallel planning work that the University of Washington is actively engaging in. The university’s 2018 campus master plan update conceives a massive open space that would replace a smattering of university buildings just north of the park and extend up toward NE 40th St and Brooklyn Ave NE. The visual connection to the water and shoreline from this plan would make the park space an even greater and identifiable community asset, especially as the neighborhood grows with more residents, students, and employees.

The project still has outstanding permitting work before construction of the site can begin. SPR expects to get its full suite of permits approved and issued in the coming months. Groundbreaking, however, will wait until the autumn since site disturbance will involve work within the water. Hydrological disturbances in waterways like Portage Bay are usually only permitted after salmon–a protected species–have completed their spawning runs. Completion of the project is due out in late 2018 when SPR hopes to hold a soft launch if all proceeds according to plan.

Planning A New Portage Bay Park in the University District