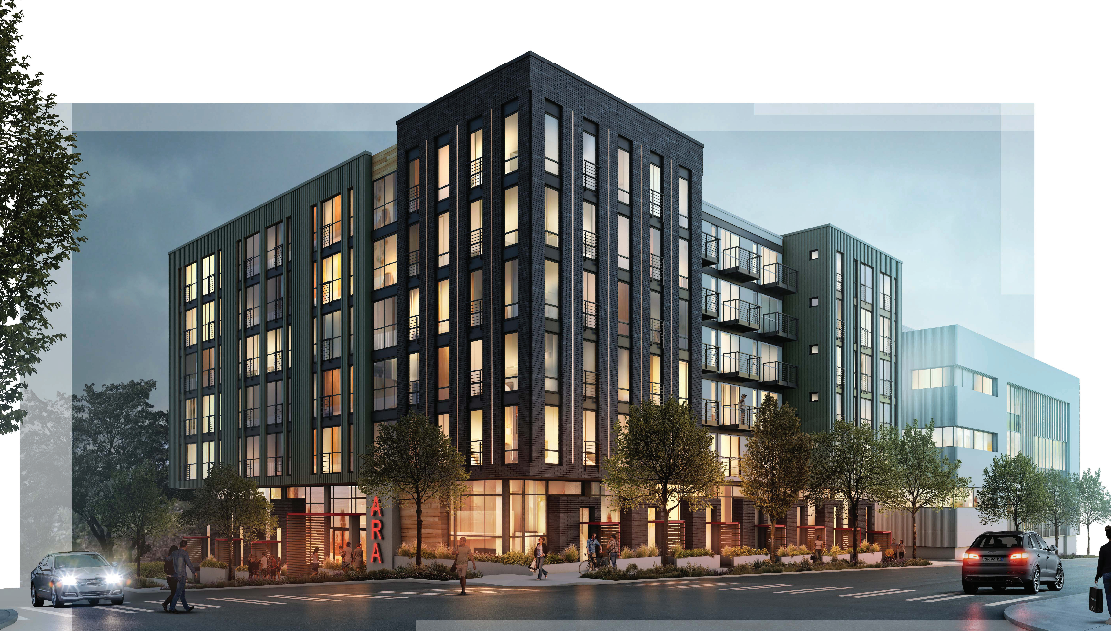 Lower Queen Anne is poised to see construction of a new multi-family residential development (203 W Republican St) on the corner of W Republican St and 2nd Ave W. The development will rise seven-stories with an eighth-floor terrace and house 128 dwelling units on a 14,400-square foot site. 18 ground floor dwelling units would double as live-work spaces, giving future residents an opportunity to pursue light commercial businesses in their homes. A further 26 dwelling units will be rent-restricted affordable housing units, which will range in affordability levels and length as a public benefit. The developer of the project is Zella Apartments, LLC, a Redmond-based development and investment firm.

The proposed development will replace a three-story post-war apartment building and an adjacent parking lot. The apartment building has a daylight basement and 19 dwelling units (averaging 627 square feet per unit). The design consisting of red bricks, wide windows, and simple motifs is markedly different from the one proposed.

As part of the development proposal, the applicant is requesting a contract rezone Neighborhood Commercial 3 with a 65-foot height limit (NC3-65) to Neighborhood Commercial 3 with an 85-foot height limit (NC3-85). The primary reason for the added height is to allow the structure to be built to an average height of 70–five feet higher than allowed in the NC3-65 zone. The Seattle Department of Construction and Inspections (SDCI) and Hearing Examiner both issued recommendations for approval, subject to specific conditions. The Planning, Land Use, and Zoning (PLUZ) Committee then reviewed the rezone request through a series of meetings with most of the interest focused on the affordable housing aspect. On Tuesday, the PLUZ Committee referred the rezone request to the full City Council recommending approval, which should appear on the agenda next week.

The affordable housing proposal changed slightly after the contract rezone was introduced to the PLUZ Committee. Originally, the applicant had proposed 21 affordable housing units that would have only been studio units. The proposal also relied on a cross-subsidy between affordable housing units by counting MHA-R units as MFTE units–essentially double dipping between programs, something that is not otherwise allowed under the MHA framework. The issue was also further complicated with lack of an SDCI Director’s Rule by in force guiding the implementation of MHA through contract rezones like this.

If the developer chooses to participate in the MFTE program, 20% of the dwelling units must be rented at affordable rates (the development has the requisite number of family-sized units to qualify for the lower ratio) specified in the program. The maximum length that a developer can participate in the MFTE program is 12 years. The total public benefit of both programs and all rent-restricted units could amount to a collective 616 years of on-site affordable housing, but with near-immediate effect and long-term availability.

The new building will consist of a modern aesthetic. Materials chosen for the exterior include wood, steel, black brick, and metal and cement siding. The tones of the building will be earthy charcoals and greys balanced against the cedar brown of wood and red steel accent trims. The voluminous structure will be slightly modulated with blocked segments set back at key sections and rectangular windows strongly pulling up from the ground.

Capping the building will be a rooftop terrace for residents. The space will be designed with a sun deck and dinning area using ribbed wood to match the bamboo planter strips. The sun deck will be visually divided from other areas to give residents more intimate and private spaces, including two private terrace alcoves. A dog terrace, fire pit, and garden will also be in the mix.

Most of the units will be studios, but there will also be a small share of one-bedroom and two-bedroom units across the upper floors. A unique aspect to the design, however, is the inclusion of a large share of live-work units.

The developer plans to have live-work units available on the first and second floors, which is an unusual arrangement. Some of the units will include lofts allowing residents in those live-work units to straddle both floors with larger space.