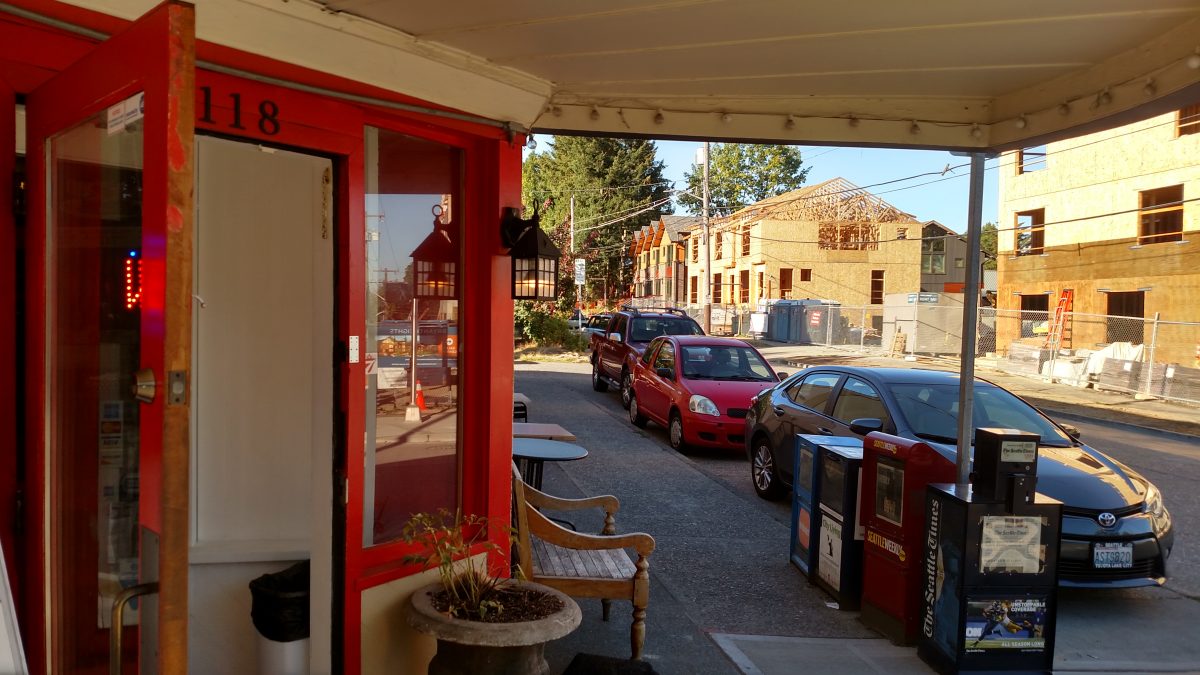 Once in awhile an idea so dumb comes along it’s like a supernova. You need to look away lest you blind yourself and zap every last brain cell with it’s mind-numbing power. Normally a supernova is a rare event, but I feel that way just about every time I read a Brier Dudley column. For the low, low price of $3.99 per week, you can have a paper with a high supernova probability delivered to your doorstep on a daily basis. The value!

Yesterday’s Dudley supernova announced itself early in The Seattle Times headline: “Seattle’s ‘build, baby, build’ frenzy leaves affordability in the dust.” It’s downhill from there. Basically Dudley read a report and it confirmed his preconceived notions. Surprise! That notion is that Seattle builds a lot but prices are still increasingly high. Ergo, screw it: let’s give up and not build at all. Logic. Anyone can do it.

It’s an old Dudley canard (delivered in an earlier supernova) that single-family homes are a primary driver of affordability in Seattle. The truth is single-family homes are generally out of reach for low-income families. Zillow estimates that the median home value in Seattle has climbed to $624,700, jumping 11.4% in one year. What middle class family can qualify for that mortgage, let alone a low-income family? If you don’t have a large down payment, even a mortgage for a $500,000 home can easily cost more than a million dollars over its lifespan. So basically Dudley’s policy boils down to ‘let poor people figure out how to become millionaires.’

Now, Dudley’s chicanery would have been easy enough to ignore if he hadn’t got a big assist from Nikkita Oliver, the mayoral candidate who is Mayor Ed Murray’s most credible challenger. Oliver praised Dudley’s article at Brett Hamil’s Shadow Council event last night. The Stranger‘s Heidi Groover was able to locate and tweet out a transcript of what Oliver said:

The Seattle Times put up a really great article today—I don’t say that often, but they did today—they were talking about the need to maybe put a pause on development and reassess. And I think what needs to happen is going back into communities and having conversations about what does Seattle actually want and who do we actually want to be.

The comment jolted a few urbanists who had expected Oliver to support single-family zoning changes–legalizing duplexes and triplexes–based on the tough lines of questioning Oliver pushed during a panel with Mayor Murray. Oliver said, “Not only does the discussion with single-family zoning need to happen about how those areas need to change, but there’s actually not been a lot of push on those areas to change because their pushback was we don’t want those people here…” It would appear at this early stage of her campaign Oliver backed away a little from her inclination that single-family neighborhoods need to change. Oliver will likely clarify her views as the campaign progresses. Her campaign kick off is Sunday at 3pm in Washington Hall in the Central District.

Regardless, the “pause and reassess” attitude is well worn by NIMBYs and the original backlash to single-family zoning changes were stoked by Dudley’s colleague Danny Westneat. If we want to ease displacement pressure on minority families in the Central District and the Rainier Valley, it’d be wise to open up the vast swaths of sanctified bungalow-land across North Seattle to single-family attached development. This wouldn’t even necessarily require changing the zoning; changing development standards would be sufficient to allow attached units like triplexes in single-family zones. I’ve suggested we go the route of Portland and pair these changes with a McMansion ban to make clear the intent for middle class housing. Additionally, Councilmember Mike O’Brien’s backyard cottage bill would have gotten after the same goals, but unfortunately the bill ran into a backyard supernova and a group of wealthy single-family homeowners living Dudley’s American Dream willing to bankroll a lawsuit to deny others that dream. The lawsuit delayed the bill by at least a year in order to complete an environmental impact statement.

Even if we were to accept a goal of more homeownership in Seattle, the resulting policy wouldn’t be to build nothing in single-family areas. People are moving to Seattle whether we build or not, and by not building enough of the right kind of housing we’re speeding economic displacement. To allow more people to own homes, Seattle would have to build more triplexes and rowhouses to replace lower intensity uses thereby allowing the total number of owner-occupied units to jump.

Any way you slice it, leaving single-family neighborhoods entirely as-is doesn’t make sense in light of Seattle’s ambitious goals. We need to spread the benefits of urbanism across the city. Where Dudley sees overcrowded buses, we see future RapidRides (since Metro Transit prioritizes fast-growing neighborhoods for service upgrades). Where Dudley sees higher taxes, we see more taxpayers to shoulder the burden. Where Dudley sees parks “overwhelmed” with patrons, we see a vibrant bustling city we love calling home.

A Housing Solution Detached From Reality