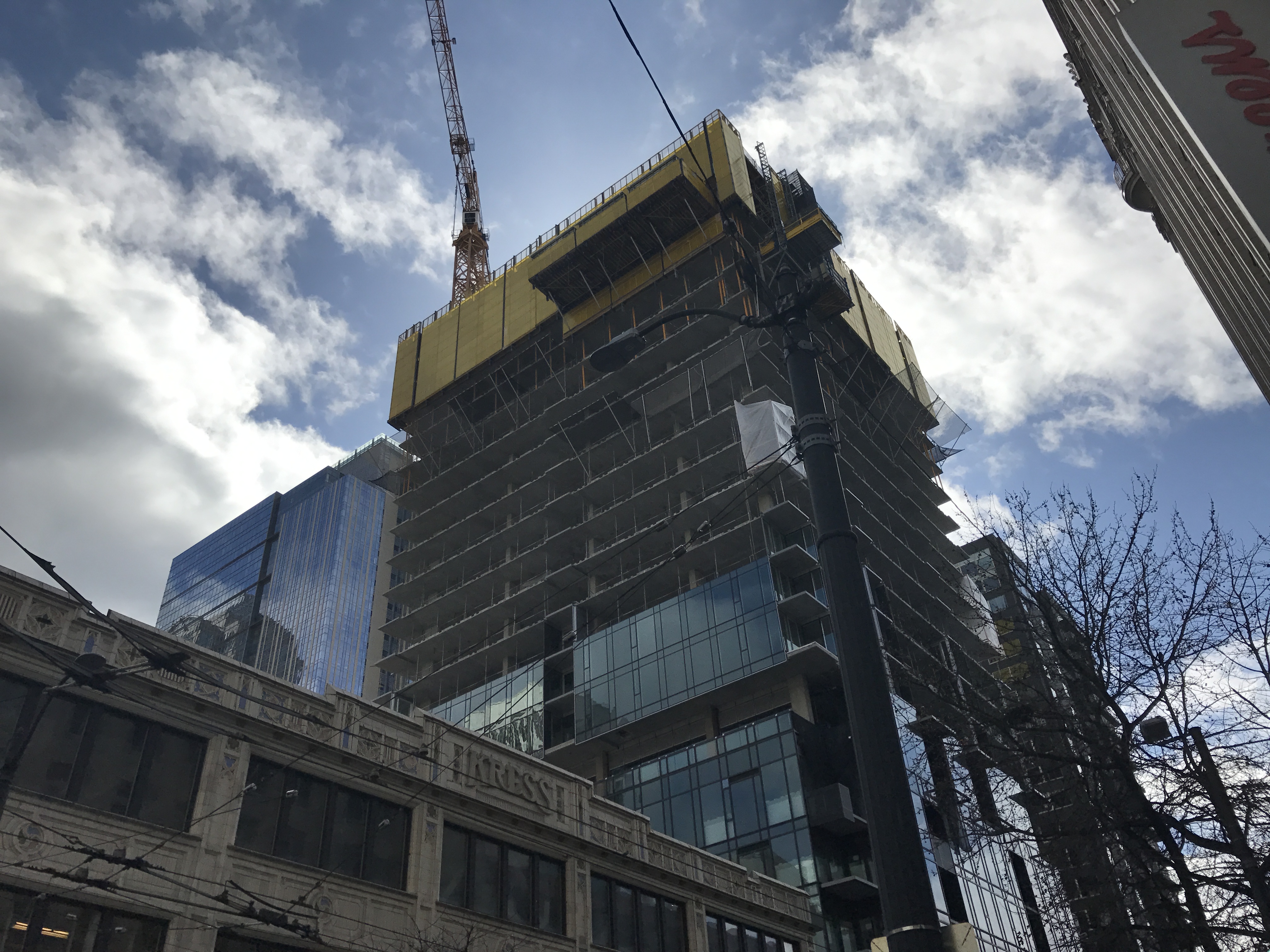 The proposed changes are significant because they could reduce some process from permit review of medium scale projects. SEPA by its nature requires analysis and disclosure of potential impacts on the environment by development proposals and authorizes local permitting agencies to use the process to add conditions not typically codified or require thorough analysis of alternative proposals if determined to have likely significant adverse impacts. But most projects subject to the SEPA process result in little or no special conditioning beyond standard codified requirements, yet the process presents an additional opportunity to appeal a development proposal, whether of merit or not.

To partially restore the higher categorical exemptions, Seattle uses a voluntary provision under RCW 43.21C.229 that allows a city in a county fully planning under the Growth Management Act (GMA) to adopt higher categorical exemptions for infill development than otherwise allowed under WAC 197-11-800. The scope of the provision is limited to areas where the locally-adopted comprehensive plan has provided for additional development capacity than already exists and the qualifying development types are limited to the following: residential, mixed-use, and non-retail commercial development up to 65,000 square feet.

While increased categorical exemptions had been moving progressively upward in Seattle since 2008, the Mayor’s Housing Affordability and Livability Agenda (HALA) Advisory Committee had signed off on 65 recommendations in Summer 2015, one of which urged further categorical exemptions. The HALA Advisory Committee suggests that reducing the number of projects subject to SEPA could have beneficial outcomes in the form of more housing production, shorter permitting timeframes, and fewer appeals.

…SEPA requires projects sponsors to analyze a range of potential impacts including Transportation, Water, Air, Habitat, Noise, Light, Land Use, and Public Utilities. In the past, the city relied on SEPA to help it address topics for which codes did not provide sufficient protections. As the City has developed more specific codes, the importance of SEPA has diminished…

Today, SEPA analysis rarely changes the outcome of development within urban areas. Research on development in Seattle from 1995-2010 found few examples of mitigation required through SEPA that was not already required by other codes. SEPA is used more often to obstruct rather than promote sustainable development. SEPA challenges can increase the cost of housing by raising development costs and knocking some proposed new buildings out of the permitting queue. To facilitate housing construction, Seattle can raise SEPA thresholds to reduce the number of housing projects that must undergo this review…

The Seattle Department of Construction and Inspections, which is responsible for reviewing and permitting development in the city, seems to mostly agree with the HALA Advisory Committee. In a presentation last month, SDCI staff noted that the limiting the application of SEPA could:

To put the totality of the original SDCI proposal in perspective, thousands of dwelling units that proceeded through the permitting process last year could have benefited from being exempt from SEPA, including many low-income, senior, and affordable housing projects.

Council Central Staff wrote separately in a memo to the PLUZ Committee on the topic, stating:

Staff has reviewed data assembled by the Seattle Department of Construction and Inspections (SDCI) related to projects in Urban Centers and Urban Villages with SAODs that were subject to SEPA review in 2016 that would be exempt from SEPA review if they were permitted under the proposed higher thresholds. In total there are 32 projects, which collectively could be developed to add 2526 units to Seattle’s housing stock…

The locations of the 32 projects are shown on Attachment A to this memorandum. To better understand the distribution of projects by size, the projects are divided into quartiles, which break the total number of projects into approximately equal groups. See Table 1 below.

As indicated in the table, the range within quartiles increases with each quarter. Not surprisingly, from the standpoint of residential unit production, the projects in the fourth quartile, which represent 25% of the total projects, account for approximately 49% of total units.

This indicates that if the Council’s objective is to reduce regulatory barriers to housing production, a relatively high threshold is needed as most unit production occurs in larger projects. Conversely, if the objective is to maintain some regulatory protection and opportunity for SEPA-based appeals, the Council could lower the proposed threshold to approximately 100 units and still provide a regulatory relief for 75% of the projects.

On the aspect of appeals related to SEPA, Council Central Staff further noted:

In 2016 the Hearing Examiner received approximately 25 MUP appeals and scheduled hearings on 16 of those appeals. Only 12 included SEPA as a component of the decision. And, of those, only five appealed decisions were for projects in Urban Centers or Urban Villages. Two of those five exceeded thresholds for infill development proposed by CB 118753.

With one exception, Master Use Permits (MUPs) for all the 2016 projects analyzed above include at least one additional land use decision that is appealable to the Hearing Examiner, in most cases a Design Review decision. This indicates that increased SEPA thresholds do not, in and of themselves, inoculate projects from delay associated with appeals to the Hearing Examiner. However, appeals associated with projects that are exempt from SEPA would be narrowed to other components of the decision, such as the Design Review decision. This could reduce uncertainty for developers about the nature and length of appeals.

Key Changes In The Substitute Bill

A new section is proposed in the substitute bill that would commission SDCI to develop a report analyzing the SEPA review process and its impact on development. SDCI would be required to collaborate with other departments to conduct the analysis and provide a compete report by the end of the year to the City Council. According the substitute bill, the specific items called for in the report include:

b) Application of the Racial Equity Toolkit to analyze, among other things, whether the infill exemption contributes to displacement, how it effects the provision of affordable housing in areas where the infill exemption applies, and what impacts there are to the community in contributing to discretionary decision-making by SDCI on development projects;

c) An analysis of projects that have undergone SEPA review to determine the extent to which elements of the environment are protected by other regulations and review processes, and the scale below which it is uncommon for the SEPA review process to result in permit conditions on the development approval;

d) The number of SEPA appeals of development projects, including location of projects outcome of appeal decisions, duration of process, and financial impact on City resources to litigate and on cost of housing production;

e) A discussion of environmental benefits achieved through SEPA mitigation conditions; and

f) Recommendations on SEPA reforms to reduce redundancies and unnecessary costs to housing production and to harmonize Seattle’s SEPA Ordinance and the procedural requirements of Seattle Municipal Code Chapter 23.76 with Department of Ecology guidance on SEPA implementation.

As the proposed substitute bill indicates, the SEPA report would need to provide recommendations, which could include expanded higher categorical exemptions similar to the original bill or take a different approach.

The proposed substitute bill retains other changes originally recommended by SDCI, including a host of technical amendments to sections and language defining what exceeding growth estimates means. This is important because of the relationship to the proposed tables above that would add higher categorical exemptions in urban centers that have not exceeded growth estimates. SDCI would be required build in a “cushion” for determining when an area is considered to have exceeded its growth estimates. Under the proposed formula, the “cushion” would determined to be the absolute growth estimate minus ten percent. As an example, if an urban center was estimated to grow by 15,000 residents over the next 20 years, new development coming in at or under the categorical exemption threshold would be exempt, so long as the area hadn’t seen net growth of 13,500 residents or more over the period.