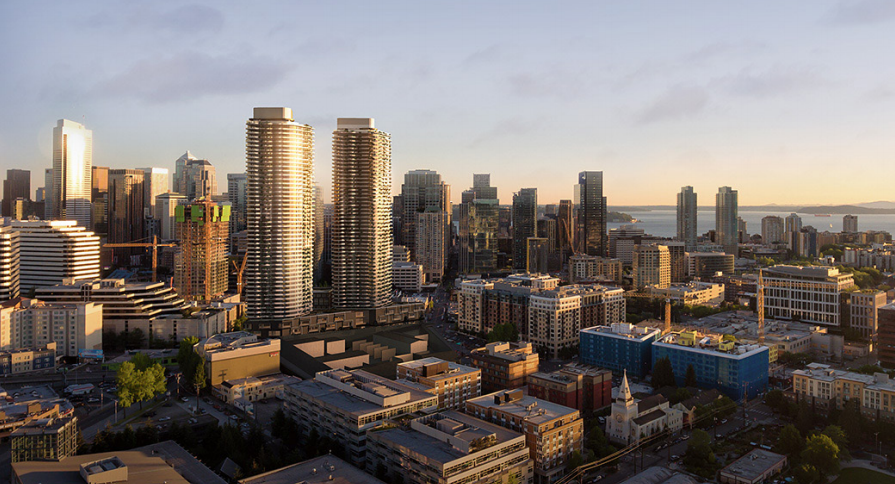 A long-planned project is approaching its final steps before being ready to start construction on a long-dormant site on Denny Way, but first the developers must head to the City Council’s Transportation and Sustainability Committee to seek permission from the City to vacate a small segment of alleyway on the site. Note, the project cleared design review in August.

The project, located at 1200 Stewart Street, at the foot of Capitol Hill on Denny Way, had already been granted an alley vacation in 2010 under a different property owner. That previous project included a large hotel portion as a part of the double-tower design, which also included a large covered driveway for hotel use. The 2017 update to the design removes the hotel and the driveway, and reduces the number of curb cuts on the site to one. This is very good news for pedestrians in the Denny Triangle, and we haven’t even gotten into the proposed alley vacation benefits yet.

The 2017 update also maintains a pedestrian walkway in essentially the same place on the site that the alley occupies right now. This walkway would allow pedestrians to cut through between Denny Way and Stewart Street without having to go all the way to the corner at Yale Avenue. The previous design didn’t maintain this connection.

That pedestrian connection is now planned as a centerpiece of the project, with retail entrances and staircases that invite activation. There would be a door at either end that would be closed after shopping hours, with access maintained for residents 24/7.

The twin towers proposed are reminiscent of Janine Gang’s Aqua tower in Chicago, with their undulating facades when viewed from below or above.

Denny Way has cut through the city’s street grid for essentially as long as the city has had a street grid, but through the decades most of the intersections on Denny have turned into wide swaths of pavement where the north-south and east-west running streets hit Denny at an angle. Despite being a direct connection between the densest residential neighborhoods in Seattle, Belltown and Capitol Hill, and our fastest growing job centers, South Lake Union and Denny Triangle, Denny Way is still a car-oriented corridor that is hostile to pedestrians (not to mention people on bikes, for whom there is no space).

This project at 1200 Stewart would provide a host of benefits that would help improve the pedestrian realm around the site, particularly on Denny Way. The sidewalks would be expanded to 16 feet on both the Denny and Minor Avenue sides of the building, and to 18 feet on Stewart, accomplished via building setbacks. On Denny, there would be a planting strip an average of seven feet wide that would buffer pedestrians from the street.

In addition, the developer would agree to pay for a curb extension at the three-way intersection of Minor Avenue and Virginia Street, to reduce crossing distances for pedestrians. This intersection is currently perilous for pedestrians: the distance crossing on Denny would only be reduced to about 50 feet, still a pretty big crossing distance, but it would be a big improvement over current design. Plans also show a crosswalk across Denny at Minor Avenue, where there currently is not one.

On the other end of the block on Denny, the project would improve landscaping at the bus stop island for the eastbound Route 8 bus at Stewart. A crosswalk would be added parallel to Denny; currently, pedestrians have to go out of their way to cross Yale on Stewart before continuing on Denny. In other words, Denny’s tragic triangles would be tamed here. Bus riders on all sides of the building are also getting benches and some bus stop shelters are also getting upgraded.

Lastly, the last alley vacation proposal didn’t include any benefits outside of the project site–the 2017 proposal does. The developer would donate $200,000 toward the Westlake Microparks Project, a streetscape improvement plan for Westlake Ave N between Denny and Lake Union Park. According to the South Lake Union Chamber of Commerce website, “The intent of this project is to achieve an improved, consistent pedestrian and retail experience along Westlake Avenue that bridges the two prominent anchors of the neighborhood.” The SLU chamber has received Neighborhood Matching Fund dollars from the City of Seattle for design work on this project, but it is not clear how far away from being actualized the project is.

Many of the plans for improvements around 1200 Stewart come from the Denny Way Streetscape Plan, which was approved by the City in 2013 with no plan for implementation beyond new development upgrading frontages. The plan lays out a vision for a pedestrian-oriented Denny Way from Capitol Hill to Uptown. 1200 Stewart shows that the vision can move forward without a push for city funding, though the 2010 alley vacation proposal for the site also shows how easy it can be to stray from that vision.

The alley vacation proposal will head to the transportation committee in the next few months.

Twin Towers Aim To Break The Mold On 1200 Stewart St