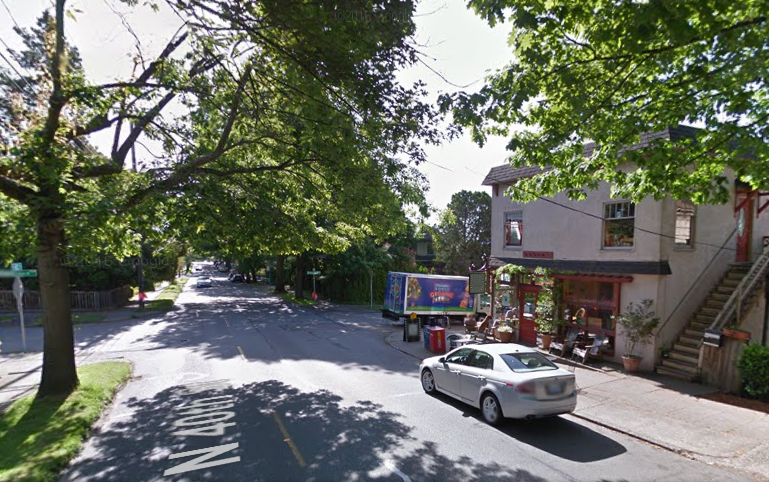 A Wallingford intersection on N 40th St was selected for improvements in 2017 by the Levy to Move Seattle Oversight Committee under the Neigborhood Street Fund selection process last year. A portion of that project will be realized this year, but the bulk of the upgrades will be deferred until 2019 when the corridor-wide paving project on N 40th St is rolled out. The specific intersection set to get upgrades is at Bagley Ave N, home to a local café known as Irwin’s.

N 40th St may seem like a small street, but as primary east-west corridor across the south end of Wallingford, traffic volumes can be high and fast, spurred on by the fact that the street follows the descent of the hill east and west of Wallingford Ave N–the high point dividing the neighborhood. The Bagley Ave N crossing also happens to elicit higher pedestrian and bicycle traffic because of the restaurant, nearby community facilities, and the fact that it’s at a flatter grade and in the middle of the grid between controlled intersections.

The Wallingford Community Council pushed for the inclusion of the project as part Neighborhood Street Fund process. In prior years, co-sponsors of the project were unsuccessful in getting City funding to improve the intersection, leaving local residents to come up with their own solutions make crossing the busy street safer. Today, orange flags are posted on the north and south streets to flagged down people driving to yield to pedestrians.

This year, the Seattle Department of Transportation (SDOT) plans to move forward with installation of markings for a curb bulb and crosswalks as well as new crossing signs. Crosswalk markings will be painted on both sides of Bagley Ave N on N 40th St. The curb bulb will be painted at the southwest corner of the intersection next to Irwin’s. SDOT says that these improvements should be in place by late summer or early fall.

Other improvements of the intersection are planned to be deferred and folded into the street repaving project set to begin in 2019. The goal of deferment is to reduce duplication of costs since much of the repaving work could mean tearing up some of the proposed improvements or doubling the work for staging and implementation. SDOT suggests that saving some of the money this way can help make improvements go further in the long-run.

The conceptual design includes new curb ramps to each side of the intersection making it easier for those with mobility challenges to cross. Sidewalks would also be repaired and upgraded. Two stops on the north side of the street would be consolidated to a location just west of Bagley Ave N; this would involve the deletion of a stop west of Meridian Ave N and a stop east of Bagley Ave N. Additionally, new pedestrian-oriented light would be installed next to Irwin’s.

While comment on the specific spot improvement is now formally closed, the project is now directly related to the Northwest Seattle 2019 repaving projects–which includes streets in Wallingford and Greenlake like 40th Ave N. Comment on that project is open through May 7th.