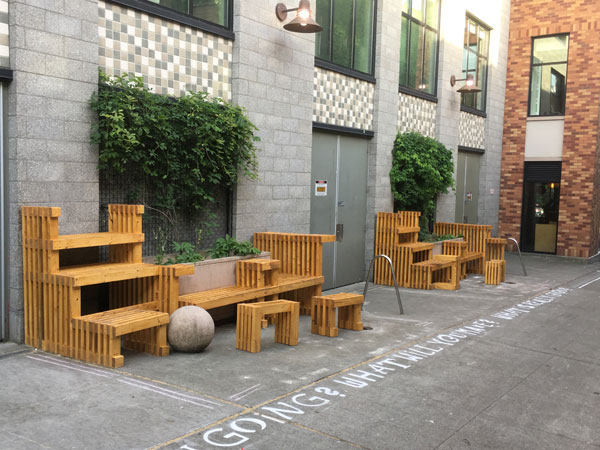 2017 seems to be the “Year of the Alley Activation” in Seattle. Two separate alley activation projects just wrapped up in Chinatown and the University District, and two more projects are still on the way for Pioneer Square later this year. The most successful and beloved active alley known to Seattleites and visitors alike is Post Alley, which weaves its way through the Pike Place Market Historic District featuring a mix of restaurants and specialty shops, the famous gum wall, and its iconic namesake signage.

Canton Alley, as it is known, has been fully rehabilitated making it a clean and comfortable alleyway for people to walk through. The alley is particularly unique because a variety of historic business entrances front upon it. Sun May Co still actively uses the alley as a main entrance, but other businesses simply treat their entrances as backdoors. By investing in improvements and activation strategies in the alleyway, the community and City of Seattle hope to see it rejuvenated as a lively space for restaurants and general business. Similar efforts are underway at nearby alleys in Pioneer Square.

Improvements to the alley included replacing the concrete surface and adding new pavers down the middle to create a sense that this alley is different from the rest–it’s for pedestrians. The old surface was patchy, dull, and broken–an unwelcoming environment for walking through.

The Seattle Department of Transportation (SDOT) and Seattle Chinatown International District Preservation and Development Authority (SCIDpda) partnered on the project to redesign and revingorate the alley. Federal and City grants were procured for the project allowing SDOT to make the Canton Alley rehabilitation between S King St and S Weller St. The southern block of Canton Alley was not included in the project work.

Further urban design and activation improvements are still to come, such as stylized lantern lighting reflecting Chinese culture and public events to make use of the space.

Later this fall, SDOT will help realize two other alley activation projects in Pioneer Square: Pioneer Passage Alley and Nord Alley. Both of these are north-south blocks between Occidental Ave S and 1st Ave S. Occidental Square separates them meaning that when completed, pedestrians would have three seamless pedestrian-oriented spaces to pass through. They will also integrate well with the already-existing tree-lined and elevated brick street of Occidental Ave S. That space is generally recognized as a pedestrian-oriented space, but SDOT still permits vehicles to drive through and park in what is otherwise considered to be a fussgängerzone (German for “pedestrian zone”).

SDOT’s concepts for the activated alleys in Pioneer Square are best represented in the after renderings below. The existing conditions are also represented:

Nord Alley already has ongoing alley activation efforts. Local businesses frequently use the space and artwork is attached to walls. In fact, Nord Alley was in many ways the impetus for all three alley activation projects in the Pioneer Square and Chinatown area. According to SDOT, non-profit International Sustainability Institute in the abutting Nord Building sought to change the space, cleaning it up for active use.

Those efforts led to the first public Nord Alley event in October 2008, when several hundred people enjoyed an evening of food, art, and music. In 2010, the group received a grant to install metal arts panels onto which other artists could then install their own art. A bicycle repair shop also opened (which remains open today), further activating Nord Alley.

A contest, co-sponsored by SDOT, asked people what they would like to see in Nord Alley, which led to the showing of a number of the 2010 World Cup soccer matches. Showings of the Tour de France followed, along with numerous musical performances and artist displays (many in conjunction with Pioneer Square’s First Thursday Art Walks).

SDOT estimates that reconstruction of the Pioneer Square alleys should take about five to seven weeks each.

The University District has had a formal alley activation plan in force since August 2015, which was the result of community interest in a using a three-block long alleyway from N 45th St to N 41st St between University Way N and and 15th Ave N. A quarter-block portion of the alley is already used as active pedestrian space between N 42nd St and the entrance of Café Allegro, which was just improved this week with new urban design interventions.

The adopted alley activation plan does not commit the City to actually building an active alley in the University District. Instead, the plan layouts out a concept of alleyway design features that would be acceptable to SDOT and the Seattle Department of Construction and Inspections if alley improvements were proposed by neighboring property owners as part of new development or voluntary implementation. The plan also takes stock of existing conditions, challenges, and opportunities with the alley and the properties surrounding it.

But a larger alley activation project is gaining steam in the University District. In partnership with local community businesses and groups, U District Square–a pro-public space community group–has spearheaded an effort to further improve the alleyway near Café Allegro. This week new hand-wrought bike racks and flexible, removable benches and seating were installed on a small stretch. The design of the new street furniture is very contemporary.

Pavement painting has also been applied to the surface of the alley to add a bit of pizzaz and mark the space as pedestrian-oriented. Later this summer, community members hope to install Tivoli-style lighting above, which would help extend use of the space into the night, adding safety and comfort for alley-goers.

The new activation strategies build upon investments and urban design features employed in years prior. Quality concrete paving was added, improving comfort and enhancing the overall pedestrian experience. Russell Hall Apartments, a relatively new mixed-use development, flanking the alley responded to the pedestrian-oriented nature of the alley with a more interactive ground floor placing windows and a wrap around porch when it was built. The building’s alley facade also has iconic lighting features, large windows, decorative wall tiles, and landscaping. High quality bike racks had also been installed across from Café Allegro, and the Magus Books building has long had a green wall cascading down to the street floor softening the space.

U District Square’s overarching approach to programming and activating the alley is to use targeted strategies from the U District Alley Activation Plan. The group suggests the employed strategies are “prototypes” and that the space is a “laboratory to test the activation concepts.” So far, all of the strategies have been relatively quick and inexpensive to implement.

“The project was completed with considerable volunteer input from community members and was the focus of an architectural design studio entitled ‘Agency of Materials’ at the UW, as led by professor Jim Nicholls,” says Cory Crocker, a leader of U District Square. “Matching contributions in volunteer time and financial donations, the project was made possible with a $7,000 Department of Neighborhoods Matching Fund grant. Because of all the support from our community, we came in under budget, returning over $2,000 back into the fund for similar projects by other neighborhoods.”

U District Square is fortunate to boast a long list of supporters, including ROOTS Shelter, Unico Properties, and businesses like Café Allegro and Bulldog News. No project like this would succeed without the support of local groups and businesses. As a community-oriented laboratory space, U District Square and its partners will have the summer and fall ahead of them to test what does and does not work in the alleyway. Undoubtedly, the lessons learned there and in Seattle’s other activated alleyways will be valuable in applying the same principles to other spaces across the city.