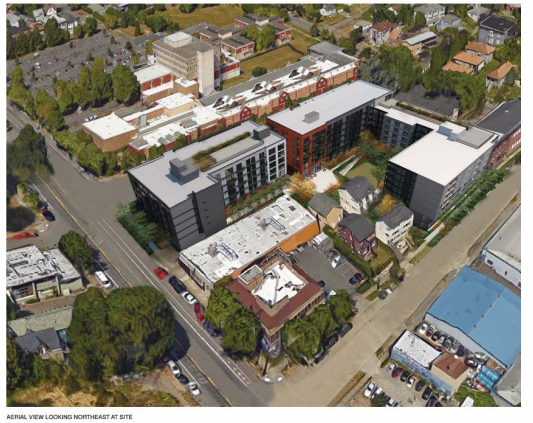 On Tuesday, the Seattle City Council voted on legislation to rezone a site across from the King County Juvenile Detention Center on Squire Park. The rezoned site is proposed to become a series of low-rise mixed-used buildings. The City Council also adopted final legislation for vacant building demolition. Both pieces of legislation were approved unanimously. Separately, the City Council modified a resolution related to the Chinatown-International District rezone to formally acknowledge the Filipino community.

The rezone will allow mixed-use development of a 62,000-square foot site. Zoning on the site will change from Lowrise 3 (LR3) to Neighborhood Commercial 3 with a 65-foot height limit (NC3-65). The proposed development for the site has already received land use and design approval for 369 dwelling units, 18 live-work units, and 9,000 square feet of commercial space. These uses will be spread across three six-story buildings. In between the buildings, the developer will construct a courtyard and provide a mid-block connection through to the street. A total of 310 parking spaces will also be provided on-site.

Since the developer is receiving a rezone, the development will be subject to Mandatory Housing Affordability (MHA) requirements for commercial and residential development. The developer is evaluating how their project may participate in the MHA and Multifamily Tax Exemption (MFTE) programs.

A memorandum by Council Central Staff highlights the challenge that developer–one Capitol Hill Development, LLC–faces in this regard. “The [developer] proposes to provide additional affordable units and apply for a property tax exemption on the residential improvement value of the project pursuant to the [MFTE] Program.” However, the memorandum also states that: “The [developer] has indicated that unless units provided through the MHA Program also count as affordable units for the MFTE Program, the project may not provide a high enough return for a lender to underwrite a construction loan.”

How the developer resolves the issue of financing for the MFTE and MHA units is something to watch. Below is the analysis the developer provided the City.

Vacant buildings are a widespread issue across Seattle with many of them the result of pending development applications where applicants ended leases for occupancy before building permits are issued for development. Data shows that vacant building complaints have been rising in recent years. Many of the complaints comes from fires, vandalism, and suspicious behavior. To address many of these issues, an ordinance was developed to:

The key changes in the ordinance are as follows:

The adopted ordinance was modestly adjusted from the one that SDCI presented in 2016.

Some readers who followed the Chinatown-International District rezone process may recall that a companion resolution was passed as part of the rezone ordinance. That resolution recognized certain attributes of the district and set expectations for actions to ensure continued livability and vitality of the area. Controversy, however, resulted from the striking of the “Manilatown” acknowledgement in the resolution, which had appeared in earlier language but never made the final cut into the resolution.

In response, the Seattle City Council adopted another resolution to fully acknowledge Filipino community as part of Chinatown-International District. Though the original resolution is only modified to read with one “whereas” recognizing WHEREAS, the area known as Chinatown/International District (C/ID) includes the neighborhoods of “historic Filipino Town”–along with Little Saigon, Japantown, and Chinatown–the resolution adopted yesterday explains the unintentional omission, relationship of past actions by the City recognizing the Filipino community, and how the ethnic precinct came to be:

WHEREAS, the Filipino community is an important part of the inclusive and diverse Chinatown-International District neighborhood; and

WHEREAS, The City of Seattle acknowledged the Filipino community’s presence, vibrancy, and contributions in 2011, when it helped fund a 7-foot-tall kiosk under the Only in Seattle grant and proclaimed November 2012 as “Honoring Filipino Americans in Seattle Chinatown ID History Month”; and

WHERAS, “Filipino Town” was the inclusive name used in the U.S. Department of the Interior National Park Service nomination for adding the Seattle Chinatown Historic District to the National Register of Historic Places Inventory; and

The kiosk that the resolution mentions is located at southwest corner of S King St and 6th Ave S and provides some context to local Filipino history.