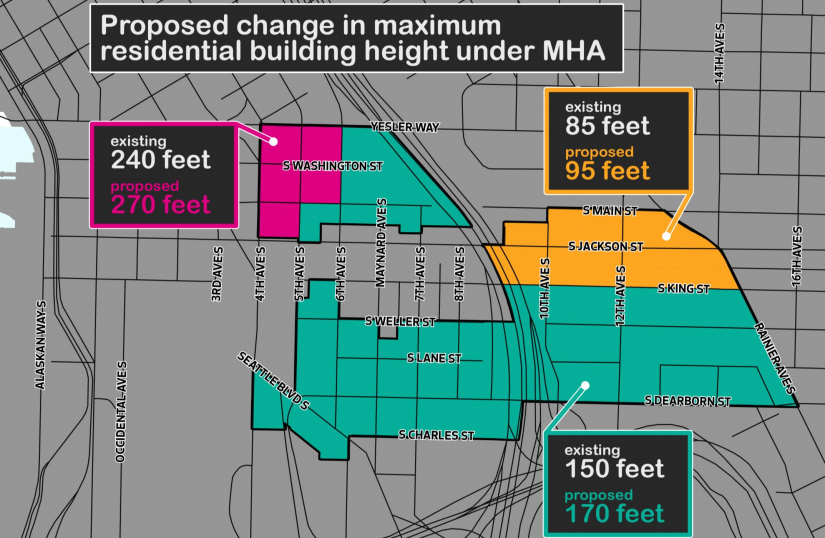 The bulk of the Chinatown-International District rezone proposal approved by the City Council remained the same from the one we detailed in June. The rezone allows slightly taller and wider buildings while pairing mandatory requirements for affordable housing for most new commercial and residential development.

While changes had been made to the rezone earlier in the Council review process, the last biggest changes came in the form of incentives for family-sized units and on-site affordable housing:

The two incentives described above are mutually exclusive; a developer can only use one, not both to achieve additional building height.

A companion resolution to the neighborhood rezone also passed, outlining specific actions for the City to follow-up on. The resolution highlights a wide variety of topics, including: revisions to local design guidelines, limits on the size of storefronts, requirements for reporting on investments and programs in the community to the City Council, limits on chain stores, and exploration of a possible pilot program for Unreinforced Masonry Preservation that would increase the supply of affordable housing on currently-vacant upper floors of buildings.

Earlier this year, the City Council passed a rezone of the Downtown and South Lake Union areas as part of the Mandatory Housing Affordability program. Residents in the Downtown Office Core 2 (DOC2) zone in Downtown were concerned that increased building heights and floor area allowances could reduce the health of the neighborhood if adequate tower separation was not provided.

The issue has been a long-standing one for local Belltown residents. In 2015, neighborhood residents voiced their objections to a new tower proposal on Fifth and Virginia. The bulk of the concerns were centered on its proximity to an existing residential tower on the other side of the alley. The concerns were particularly acute from residents in the Escala building, which is situated on Fourth and Virginia west of the alley. In that case, the developer sought to locate a tower structure immediately abutting the alley, which proposed to set the two tower structures less than 25 feet apart. The ultimate plans are still under review, but a modest increase in tower separation over the original proposal is a likely outcome.

Following from this in 2016, the Downtown Residents Alliance filed an appeal against the Downtown and South Lake Union rezones because the proposal did not provide adequate provisions to deal with tower separation, particularly from existing residential towers. That appeal was eventually withdrawn with an eye toward separate legislation that would address the tower separation issue.

Sponsored by Councilmembers Sally Bagshaw (District 7, Downtown and Magnolia) and Rob Johnson (District 4, Northeast Seattle), the ordinance explicitly identifies “light” and “air” as supporting considerations for voluntary tower separation. “Increased separation from existing residential towers,” the ordinance proclaims, “can increase penetration of light and air to residences and reduce conflicts between uses in adjacent towers.” In many ways, the ordinance reflects the kind of incentives that Anton Babadjanov had suggested in exchange for providing valuable light and air to tower dwellers.

Under current law, the DOC2 500/300-550 zone allows non-residential towers up to 500 feet in height and residential towers up to 550 feet. New residential towers may exceed a building height of 300 and achieve a maximum of 550 feet if a developer voluntarily agrees to deliver affordable housing. Non-residential towers, however, may achieve the maximum 500-foot height limit without a voluntary agreement for affordable housing. The zone also has base floor area allowances and bonus floor area allowances, the latter available to developers electing to use various incentives to increase floor area. In terms of setbacks, there is no requirement in the Land Use Code for setbacks between towers, though setbacks exist for other purposes.

For the purposes of the provision, an “existing tower” is considered to be a structure that physically exists or where an applicant has filed a complete Master Permit Application that is still valid or has submitted a complete application for Early Design Guidance under Design Review. The additional floor area and building height allowed by the incentive will be processed as an administrative decision by the Seattle Department of Construction and Inspections, which are not appealable to Hearing Examiner. Instead, most appeals would go to Superior Court under the Land Use Petition Act.

The City Council authorized sale of a Seattle City Light (SCL) property in South Lake Union with up to $10 million in proceeds earmarked for the utility’s Rate Stabilization Account. This would money would help reduce the need to increase rates in future years. Located at 8th Ave N and Roy St, the property is a long rectangular block on the eastern side of 8th Ave. Half of the site is occupied by a large landmark building.

SCL sought to begin sale in 2010, but stopped short of actually disposing it. The process to sell it began again this year with SCL notifying other departments, such as the Office of Housing, Seattle Parks and Recreation, and the Seattle Public Library. None of the agencies expressed an interest in acquiring the property since under law SCL properties must be sold at fair market value. With a price tag of $30 million (which discounts environment cleanup costs of the site), the valuation was well above what agencies were willing to pay even if there was a local need.

At a committee meeting last week, Tim Croll, project manager for SCL, said that his agency received many comments from the public requesting that the property be put to various public uses, including as a pool, tree reserve for carbon offset credits, school, and land trust. One issue the a community group intends to carry forward is locating a community center on the site as part of future development. Councilmember Lorena González asked if that would be feasible. Croll said that the authorizing ordinance for the land sale was “agnostic” on future use, but that it was possible if negotiated between the community, developer, and relevant City agencies.

During the meeting, Chip Nevins, a planner for Seattle Parks and Recreation, explained that his department evaluated acquisition of the property. He noted while there is a deficit of park space in Downtown and many urban centers and villages, the particular property’s location was not strategic to South Lake Union given that it is only two blocks from Lake Union Park, a major open space in the neighborhood. Nevins also said that the property price was much too high since his department only receives $2 million annually for acquisition costs. The Denny Substation, which is another property owned by SCL in South Lake Union, will provide public space, including a dog park, community meeting space, and walking loop, when complete.

The property, however, was recently rezoned SM-SLU 100/95, a mixed-use mid-rise zone, as part of the Mandatory Housing Affordability program. If a developer acquires the property and redevelops it, the affordable housing requirements will kick in. SCL’s early estimates indicate that up to $3.5 million in affordable housing fees could be delivered by a project. Or alternatively, up to 22,000 square feet of affordable housing space would be created.