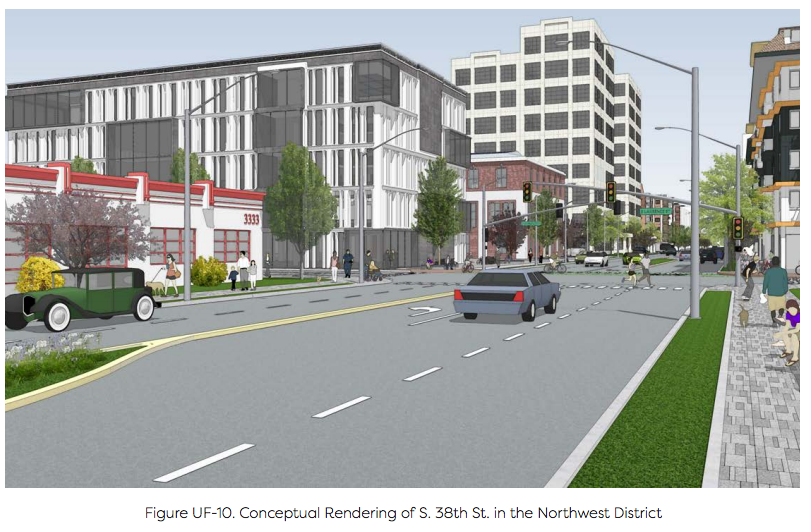 Tacoma is in the process of developing a subarea plan for Tacoma Mall and its environs. The plan will guide growth and redevelopment of the district over the next 20 years. The effort builds upon past planning efforts for area. As part of the subarea plan, Tacoma is also conducting environmental review and intends to publish an Environmental Impact Statement at the conclusion of the planning process. Two primary alternatives are being evaluated as part of the planning process:

The Tacoma Mall is designated as a Regional Growth Center (RGC) by Puget Sound Regional Council (PSRC), which is just one of 24 in the four county region. The designation typically is associated with districts where large shares of jobs and housing are to be accommodated. Areas with an RGC designation also get a priority for federal transportation dollars that are administered by the PSRC. The RCG boundaries are proposed to be expanded by more than 116 acres.

Though the planning effort is intended to in part increase development capacity, the corresponding land use changes do not necessarily equate to significant increases in additional population, housing, and jobs through 2040. In most cases, the increased growth from added development capacity is anticipated to be about 10%:

Separating the subarea into smaller districts allows for a higher degree of differentiation in overall character, design, and pattern. The following table highlights some of these key features currently present in the districts:

Proposed zoning changes would remake much of the Tacoma Mall Regional Growth Center and could end up looking very close to the zoning proposal above. The following table gives a sense of how the different zoning districts are intended to work and the general types of rezones that are proposed to occur:

All of the zoning types would allow residential development, but URX zone would be the most restrictive to non-residential uses. The other zones generally would allow a spectrum of commercial uses, including mixing residential and commercial. Light industrial uses would be more widely allowed in CIX zones than UCX zones.

Nearly a dozen different topic areas for land use regulations could see companion changes as part of zoning changes. Many of them directly relate to the Tacoma Mall subarea, but could have wider implications, too.

The proposal would require that walkways achieve higher standards than they typically do, particularly for the middle walkway in the three-walkway scenario. A developer would need to build the connection either as a full street with sidewalks on both sides or create a pathway wide enough to comfortably provide space people walking and biking. The walkways would also need to offer a direct connection to another public right-of-way.

A tiered system for new connectivity and circulation would be established at three different levels. Tier One connections would be important to neighborhood-wide transportation objectives and be paid for by the city. Tier Two connections would largely be focused on building out district-level transportation networks and costs would be shared by both developers and city. Tacoma would require both of these tiers to be mapped and fully public. A third tier of connections are focused on providing internal pedestrian connectivity at the project (describe above); these connections would neither be mapped nor funded by the city.

Specific criteria would be established requiring development of the tiered connections based upon the size of a site and lack of a sufficient transportation network. Restrictions would be further imposed on how much development could occur within the mapped Tier One and Tier Two connections. Much of the desired transportation network is already in place, but the proposed requirements would make the system much more complete and functional as a connected grid.

With the proposed zoning changes, some properties in the Tacoma Mall subarea would be rezoned to have a by-right building height limit and a higher height limit if bonuses are used. Existing UCX 75-120 is an example of how this works. 75 feet is the standard height limit by right. To achieve heights above that and up to 120 feet, a developer would need to use make 25% of the square footage residential or use Transfer of Development Rights to construct the additional square footage.

Other zoning types like NCX allow the use of bonus height such as providing public art equal to 1% of the project valuation, transit stop improvements, creating a substantial amount of ground floor retail and restaurant spaces, achieving high energy efficiency, and vegetating rooftops. A variety of technical changes are proposed in relationship to bonus options and requirements, including expanding the general bonus options more widely to zones like UCX.

Drive-through facilities are specially regulated on Pedestrian Streets. These uses are prohibited from making through connections to Pedestrian Streets, must locate driveways at least 150 away from a transit stop, and locate the drive-through windows away from a designated Pedestrian Street. New requirements would be added to require screening of drive-through stacking lanes and reduce auto-orientated design. Stacking lanes would be required to either be partially enclosed in a decorative or leafy building or use a trellis type structure to reduce the appearance of the lanes. General site design requirements would also be enhanced requiring safer designs for pedestrians.

Most of the proposed design standards for residential development are focused on townhouses. One change envisioned would prohibit locating front doors on alleys unless they are will have pedestrian access and high quality environment, such as landscaping and pedestrian-oriented amenities. Another set of changes would require townhouse orientation toward streets, additional architectural details on facades oriented toward the public realm, and other elements that improve the transition from street to units. Areas that are intended to be shared between pedestrians and vehicles would require special materials that clearly indicate either separation of modes or the shared nature of an accessway.

Additionally, all multifamily development with space between the building and sidewalk would need to make the area in between visually pleasing; parking would be entirely prohibited in such areas.

Landscaping standards would be expanded to require all development in the URX zone to achieve a 15% minimum tree canopy coverage per site. Small scale residential development in mixed use zones would to provide street trees where required.

To support the growth of the Tacoma Mall subarea, the planning work has identified what a complete transportation network could look like and the types of investments required. As noted before, connectivity is a key theme and reflected in both proposed regulatory requirements and public commitment to delivering. The following map shows how the full street and trail network could be built out: 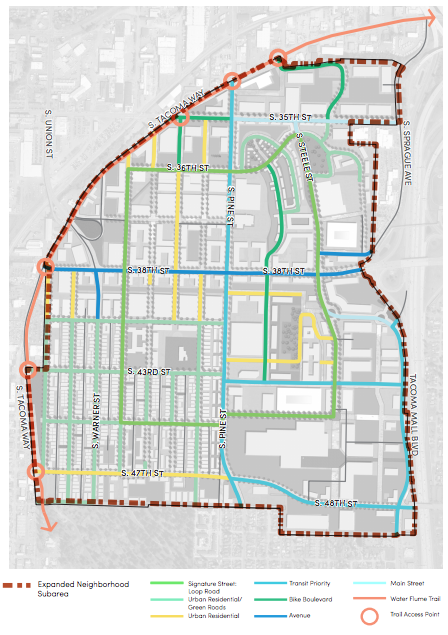 Bike and pedestrian projects would get serious attention with a slate of projects. For instance, Water Flume Trail would be extended northeast of S Pine St toward Downtown Tacoma making the non-motorized trail complete so as to offer better mobility and recreation opportunities. Arterials like S Pine St and S 47th St would get dedicated bike infrastructure. And a few small segments in the Tacoma Mall subarea would see new pedestrian-oriented projects implemented. 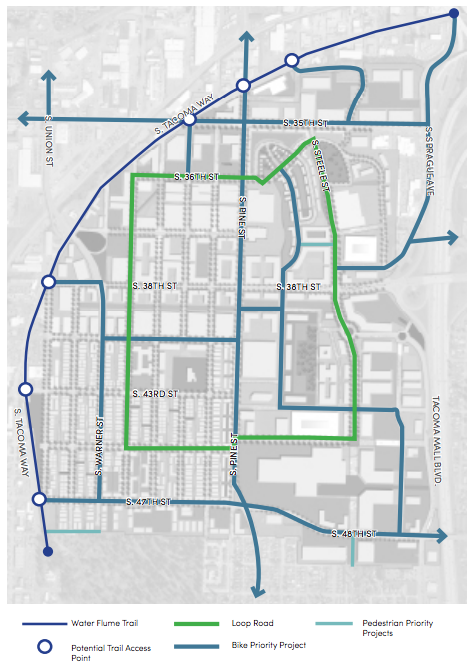 In two cases, the planning work provides a higher degree of specificity for street design. While only concepts, the designs provide a sense of how the street network at the north end of the Tacoma Mall and on S 38th St could function:

Other Planning Strategies and Next Steps

The draft subarea plan is packaged with a lot of other topics like parks and open space, infill strategies, growing jobs and businesses, utilities and public services, and funding mechanisms to realize plan elements. Tacoma is looking toward adopting a planned action ordinance with land use and zoning changes, too. This is similar to what Edmonds and Shoreline have done with similar subarea planning efforts. A planned action ordinance can allow project-level land use review to be exempt from concurrent environmental review under SEPA (State Environmental Policy Act), which can sometimes extend project review periods and pose additional legal challenges. The subarea plan will be refined throughout the fall and could be adopted in some form by early next year.