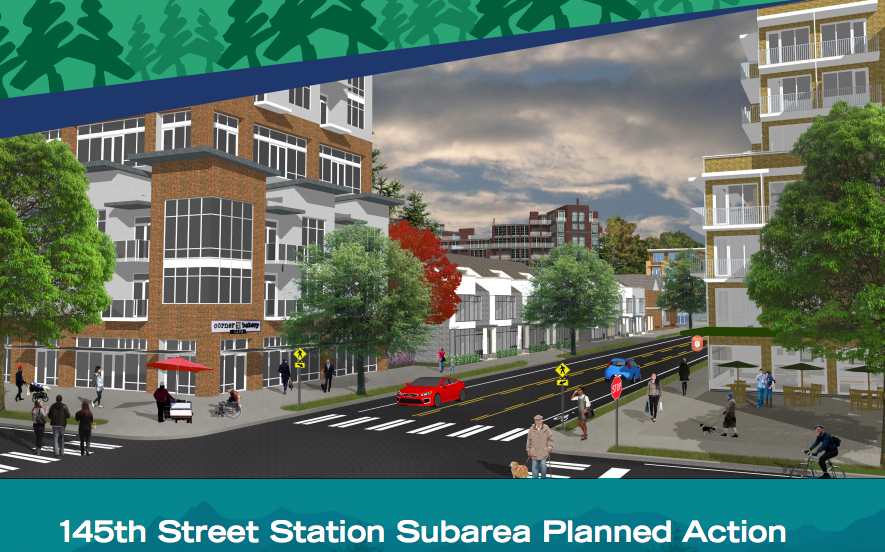 A three-year process to adopt subarea plans around two future light rail stations in Shoreline has come to an end. On Monday, the Shoreline City Council met to decide the fate of blocks surrounding the future 145th Street Station, which arrives in 2023. The adopted zoning map is remarkably similar and perhaps even more bold in some ways than the Shoreline Planning Commission’s recommendation. Dozens of amendments were proposed to the rezone map during the five-hour marathon meeting that ended just before the clock struck twelve.

There are four main differences between the Planning Commission’s recommended zoning map and the City Council-approve zoning Map:

For those who may not have been following this process, Shoreline has been looking at rezoning the station area near I-5 and 145th Street from single-family residential to Mixed Use Residential (MUR) with maximum height limits ranging from 35 feet to 70 feet.

Beyond the main changes outlined above, there were also a few minor adjustments to MUR-70 zoning recommended by Planning Commission. Closer to the station area, MUR-70 zoning was swapped for MUR-45 zoning north of NE 152nd St. But in the process of this, the City Council also pushed some of the MUR-70 zoning further east toward 8th Ave NE. The City Council also swapped a small amount of MUR-45 zoning at the corner of NE 148th St and 15th Ave NE for MUR-70 zoning. In addition these, the swapping of single-family zoning for MUR-45 zoning along 5th Ave NE was a significant change. The corridor could create a continuous stretch of urban development from the 145th Street Station area to the Ridgecrest business district centered on NE 165th St, a concept that was originally considered as part of the Connecting Corridors Alternative earlier in the process.

The first phase of zoning will come with nearly 70 blocks of urban-density zoning and take immediate effect. The second phase will wait until the light rail station opens under the approved resolutions; the approximately 35 blocks coming online in 2033 will account for the lesser share, with most of those further away from the station area. 2033 is the same year that the last bit of zoning will be unlocked further up at the 185th Street Station area.

Importantly, the City Council approved the planned action ordinance, which will generally exempt projects within the planned action area from conducting environmental review when submitting development applications and building permits. That will likely speed up the permitting process for many development proposals and presumably ahead off costly legal battles.

The rezone was coupled with a number of additions and modifications to the development regulations for the MUR zones. Multiple single-family detached will be disallowed as a use in the MUR-45 zone and single-family attached, duplexes, and townhouses were eliminated as allowed uses in the MUR-70 zone. Additional setbacks will apply to developments on 145th Street and 185th Street depending upon the zone in order to improve the pedestrian environment. And 15 extra feet will be allowed above base maximum building heights in MUR zones to allow for rooftop amenity uses.

A few feel good things were also adopted in the quartet of ordinances, including: policies that would push for connections over I-5 or a lid, adding park space near existing parks, and installation of a pedestrian-friendly grid. Perhaps bowing to pressure from residents, the City Council waned a little when it came to minimum density requirements. In the MUR-70 zone, residential projects will only be required to attain a minimum net density of 40 dwelling units per acre instead of the 80 dwelling units per acre recommended by the Planning Commission.