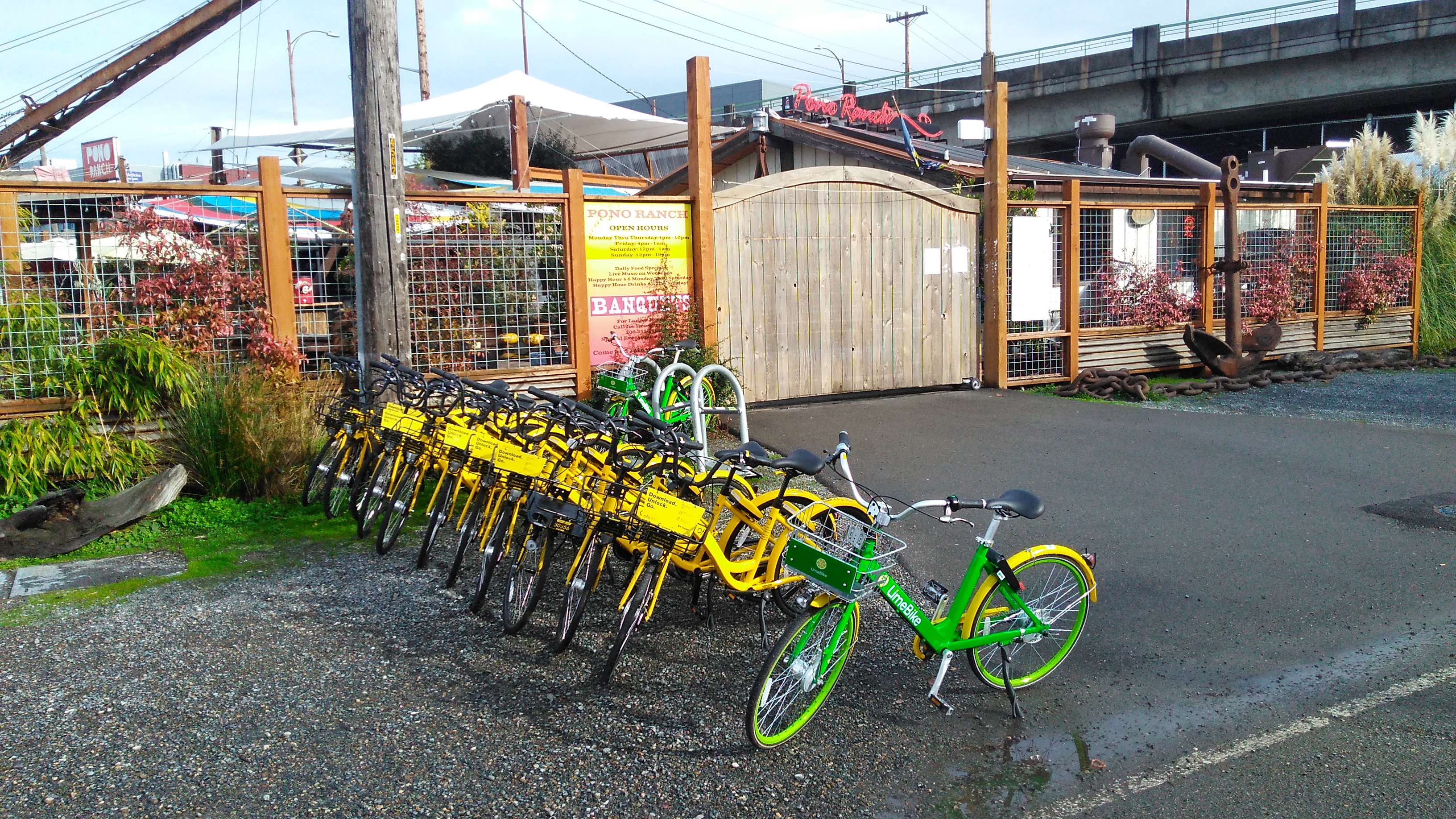 Seattle privately-run bikeshare pilot is widely heralded: it’s cheaper, shinier, and more widespread and flexible. There’s just one catch. Besides being better than Pronto Cycle Share was, private bikeshare hasn’t accomplished much yet.

After pulling the plug on Pronto Cycle Share in the midst of a planned reboot as a completely city-managed separate system, Seattle tried something that no other U.S. city had tried before: letting as many private bikeshare operators come in and have access to all of Seattle’s city right-of-way with relatively limited restrictions. All the companies had to do was pay the appropriate fees and Seattle’s streets and sidewalks were theirs. (Incidentally, managing sidewalk bike clutter is a major challenge facing the free-floating bikeshare program going forward.)

In September, the city council’s transportation committee received a presentation on the state of the pilot program that the Seattle Department of Transportation (SDOT) had been implementing around private bikeshare operators. At the meeting, SDOT’s Transit and Mobility Director Andrew Glass-Hastings and Kyle Rowe (the SDOT staffer credited with creating the framework for free-floating bikeshare) laid out what had happened with the free-floating pilot since its launch in early July. “We’re talking about bikeshare, and we actually have a positive story to share,” Glass-Hastings told the committee, chaired by Councilmember Mike O’Brien.

Compared to Pronto, the numbers for free-floating bikeshare (FFBS) look positively stellar. Pronto, which suffered from poor station placement and a disjointed network that almost everyone agrees gave it a severe handicap, also had the misfortune of being one of the most bad-mouthed arms of the city’s transportation system. The free-floating counterparts, made up of (in order of their arrival on Seattle’s streets) Spin, LimeBike, and Ofo, are free from association with city funding, and have the backing of heavy amounts of start-up cash.

The presentation made to the city council rightfully showed optimism toward the prospects for free-floating bikeshare in Seattle. But we should be examining the system on its own merits, not simply asking “is it better than Pronto?” In a chart that was not included in the presentation to the city council committee, but that was posted on the SDOT blog in a post that–after only looking at two months of data for FFBS–was ready to declare “it’s a pretty big success.” Pronto’s metrics were laid out, side-by-side, with the free-floating bikeshare.

Seattleites were very anxious to use bikeshare bikes in the first few weeks of the pilot program. Average usage of 2,231 trips per day is a lot of trips. However, the days examined here only include summer days with long hours of daylight, combined with excitement over the launch of the program and all of the buzz associated with that, as well as high numbers of free rides provided by the companies for new users. In other words, the factors that combined to create the metrics above will likely never be repeated ever again. We have to look deeper into the numbers, insofar as we can, to glean as much as we can about the sustainability and usefulness of the system.

Let’s look at one of the metrics above: average trip duration. 26 minute average trip time on a bikeshare system might not seem like that much, but you can cover quite a bit of area on a bike in that amount of time. According to Google Maps, in 26 minutes you can get from Westlake Station almost all the way to Gas Works Park (24 minutes), or from Beacon Hill Station to Seward Park (27 minutes). If the average trip length is this amount, that means many users are taking more time. It doesn’t look like bikes are being used for last-mile connections.

But that metric is at odds, slightly, with the metric of average trip length. If a trip from Westlake to Gas Works Park, for example, taking 24 minutes is 3.8 miles, that means that if the average trip length of free-floating bikeshare trips is instead 2.6 miles, we can safely conclude that free-floating bikeshare trips are, on average, leisurely rides. It’s also worth noting that while we know exactly how far trips were on the free-floating systems, we don’t have that exact same metric for Pronto trips. Pronto bikes were not equipped with GPS and instead distance had to be extrapolated from trip time, which, as I’ve demonstrated above, can be problematic.

But the most telling metric shown above is the percentage of trips taken during peak hours on weekdays: 20%, with just 4% taken during the morning peak. 80% of trips outside commuting hours on weekdays tells us that, for the most part, people were not using the system to get to work. This will be very interesting to track over time, but we really won’t be able to get to the bottom of the information without a completely different set of data: what the riders are experiencing.

Rider surveys are going to be essential to gauging the success of the private bikeshare in fulfilling a public good: getting people to where they need to go without the use of a car. Is the reason that few people are using the bikes to commute because riders attempted to get a bike in the morning before work and either couldn’t find the bike based on the position suggested by the app, or found the bike inoperable, or had trouble getting the app to work in the first place? We don’t know the answer to these questions right now; nonetheless, our free-floating bikeshare guidelines are already well on their way to being a national model for other cities to copy.

Meanwhile, in Vancouver, B.C., the city council there has been reviewing the performance of their station-based system, Mobi, after it has wrapped up its first year of operation. Mobi, like our free-floating pilot, gradually added additional bikes to the streets over the course of that year. However, while we have around 6,000 bikes citywide, their system is currently paused at 1,214 bikes at 123 stations closely clustered around the downtown peninsula.

The free-floating bikeshare average of 2.25 rides per bike per day in Seattle during the first two months is right on par with the metrics that Mobi has seen during its highest ridership summer months. With almost five times as many bikes in Seattle, this goes to show that a station-based system in a city that shares a climate and terrain with Seattle could also be successful if given a chance. Another factor shared between the two cities is a helmet requirement law. Vancouver is reporting a 70% compliance rate after providing every user with a cranium cup. But I’m sure there are some that will continue to insist that Seattle is completely different.

The free-floating bikeshare pilot is still in its infancy. Other cities are greenlighting these systems, and many are looking at our regulations before creating their own framework. We must ensure that we examine exactly how the system is functioning for all users (or attempted users) before we continue down this path. Rider surveys must be a part of this, considering the many aspects that free-floating bikeshare can “let down” the user. We may ultimately decide that free-floating bikeshare is a resounding success that benefits most of its users, but we are a long way from being able to knowledgeably make that decision.