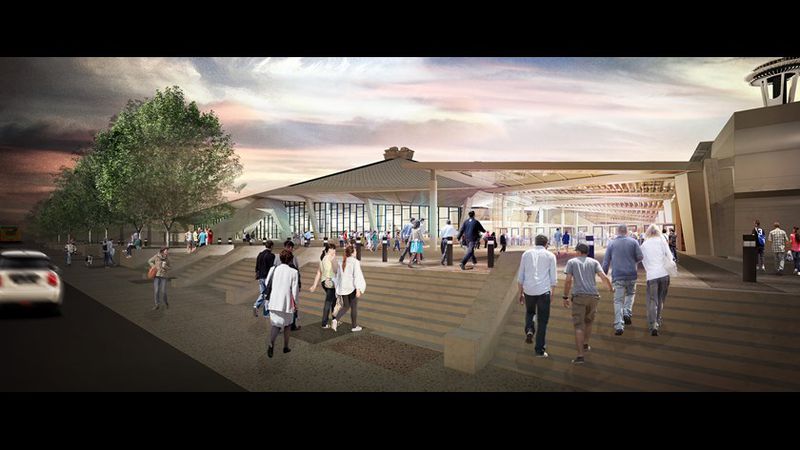 On Monday, the Seattle City Council approved a memorandum of understanding (MOU) with the Oak View Group (OVG) paving the was for a $600 million redevelopment plan of KeyArena at Seattle Center and possibly the return of the Sonics. The MOU drew most of the attention during the meeting and brought extensive public comment, but at the meeting the city council also agreed to a small rezone, passed land use regulations for short-term vacation rentals, and landmarked a building in Alaska Junction.

The KeyArena redevelopment is expected to top $600 million and breathe new life into an aging facility. Terms of the MOU indicate that OVG will nearly double the total square footage of the arena (368,000 square feet) and honor preservation controls being imposed on the iconic roof. In exchange, the city will allow OVG to hold a 39-year long-term lease of the arena and associated parking garage. The lease could be extended up to an additional 16 years totaling 55 years if approved by the city.

The Seattle Storm, a Women’s National Basketball Association (WNBA) team, are the arena’s anchor tenant today, but OVG hopes to lure more professional sports teams as long-term tenants. Top of the list is the National Basketball Association in order to bring back the Seattle Supersonics. A National Hockey League (NHL) team is also a priority, and OVG has hinted acquiring an NHL team is more likely in the short-term. The MOU acknowledges the importance of retaining the Seattle Storm.

Throughout the year, OVG’s programming would include music, entertainment, and public events. In fact, the MOU stipulates an expectation that OVG provide 14 days per year free to the city for use as a makeshift public medical clinic and Bumbershoot every Labor Day Weekend.

In terms of the redevelopment, OVG will redesign the structure as a modern state-of-the-art facility that achieves at least LEED Gold rating (or equivalent). The design will ensure that the arena space can accommodate multiple configurations, depending upon use:

The MOU also makes other key promises, such as a 1% contribution to art, participation in the Mandatory Housing Affordability (MHA) program, temporary relocation assistance for Pottery Northwest, impact mitigation for the skate park, and other relocation assistance for Seattle University and Seattle Storm. OVG will be expected to work with the community through engagement and develop a $20 million community benefits program that fosters local services for youth, arts, music, and culture.

While it is still early in the process since the project must complete an Environmental Impact Study (EIS), OVG has agreed to deliver local mobility improvements. This includes more than $1 million annually over over the 39-year lease period ($40 million in total). The Final EIS could result in additional transportation mitigation measures being imposed on the project. At minimum, OVG will be responsible for working with the city to realize the North Downtown Mobility Action Plan.

Redevelopment of KeyArena could begin as early as late next year with the new facility opening to the public in 2020.

These changes will come into force sooner than other short-term vacation rental requirements. The recently passed tax, for instance, will begin in 2019. Companion legislation to establish a comprehensive regulatory framework for short-term vacation rentals subject to an operator license could start as soon as Fall 2018, though Councilmember Rob Johnson is proposing a further delay.

A rezone has been granted for a small 0.43-acre site (5911 42nd Ave SW) near Morgan Junction. The rezone from Single Family 5000 (SF 5000) to Lowrise 1 (LR1) will allow construction of a modest single-family attached development on property owned by West Seattle Church of the Nazarene (WSCN). The project is a partnership between WSCN, Paar Development, and Neiman Taber Architects.

LR1 is consistent with the Residential Urban Village designation of the property on the city’s Future Land Use Map. The church does not intend to use the full development capacity increase that LR1 could offer the site, but a total of six dwelling units would be created. The church hopes to use proceeds from sale of the homes to fund capital improvements and restoration of the church building, which is situated just north of the homesite area.

Local firm Neiman Taber Architects is leading the design process for the development. The renderings show a cluster of three duplexes in a modern Northwest Craftsman style. Dwelling units will face toward a common open space and play area that fronts upon 42nd Ave SW. Each structure will be two stories with a tuck-under basement garage that has alley access.

Before reaching the dais of the city council, a public hearing on the rezone proposal was held by the city hearing examiner. The applicant objected to imposition of the MHA requirements on the rezone. The church intends to allow the open space to be used an informal community gathering space for local residents and had hoped that would provide sufficient public benefits. However, city policy requires affordable housing set-asides or in lieu fee payment unless very specific exceptions under the MHA framework are met. As a result, 9% of the units will need be set aside as affordable housing or the developer will need to pay $20.00 per square foot to the city to procure affordable housing.

The city council has landmarked a structure known as the “Campbell Building” (4554 California Ave SW). The two-story building is currently home to Cupcake Royal and located in the heart of Alaska Junction at the confluence of California Ave SW and SW Alaska St. Several other tenants occupy the ground floor of the building along the SW Alaska St frontage. The building is distinctive for its red and brown brick facade and decorative patterns reminiscent of early twentieth-century English architecture.

The building features a variety of notable architectural attributes, such as a gabled roof (not common for this type of structure), an upper story bay window, transoms near the corner, a cast irony balcony, and bulky cornice work. The detailed patterning of the brick further accentuates the exterior facade. The structure was originally built in 1911 and co-designed by architects Clayton D. Wilson and Arthur L. Loveless. An addition was later made in 1926, which was designed by architect Victor W. Voorhees. The Voorhees addition was focused on extending the structure further east toward the alley.

Present zoning of the Campbell Building property is NC3P-85, which allows mixed-use structures up to 85 feet high. However, the existing structure is only two stories and does not qualify as sending site for transfer of development rights under the Land Use Code. The property does qualify for a variety of other incentives, such as reduced taxation, reduced parking requirements, and exceptions from certain building code requirements to facilitate longevity of the structure.