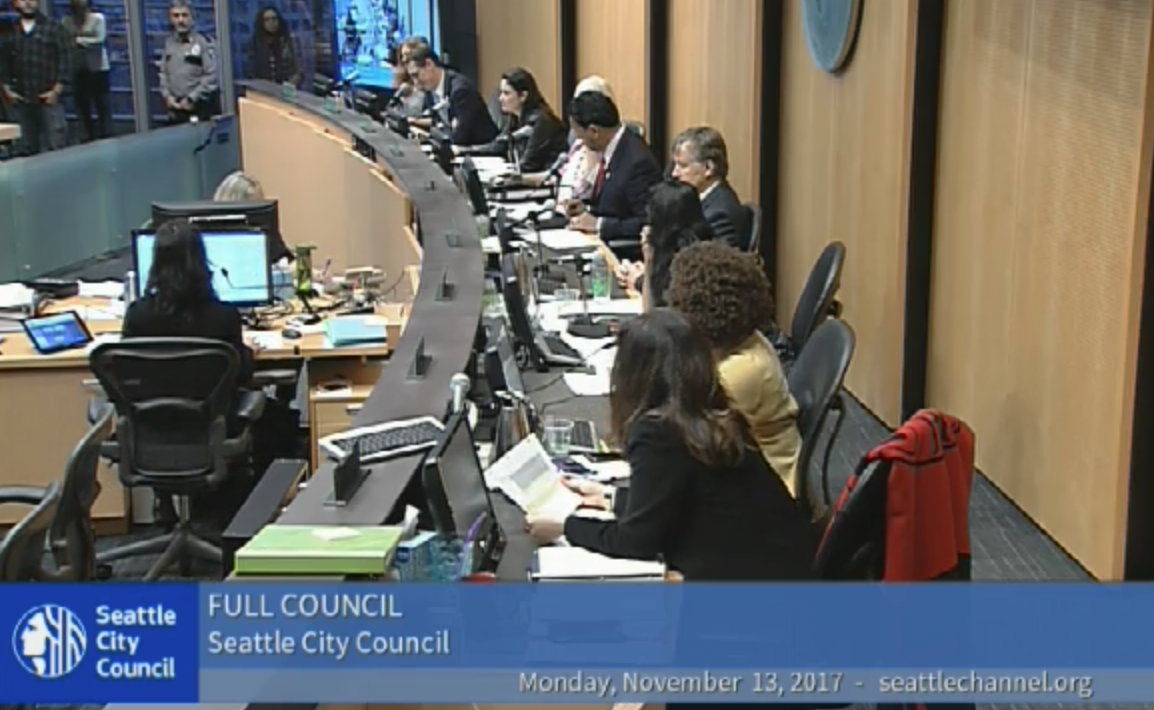 Seattle will tax short-term vacation rentals like Airbnb. But a formal regulatory framework for them still remains uncharted.

On Monday, the Seattle City Council delayed action on formal operating regulations (Council Bill 119081) for short-term vacation rentals that would establish health and safety standards, insurance requirements, and limit the number of units that a host could operate. Instead, the city council sent the legislation back to the Planning, Land Use, and Zoning (PLUZ) Committee for further discussion and deliberation at the request of Councilmember Rob Johnson. But a new tax (Council Bill 119083) will go in effect for all short-term vacation rental operators in January 2019 that differentiates based upon booking types (e.g., whole dwelling unit or a private guest room).

To Act or Not To Act

In explaining his desire to delay the legislation and why it even appeared on the city council’s legislative agenda Monday, Councilmember Johnson said that “there was budget implications” by raising revenue through short-term vacation rental taxation. Taxing short-vacation rentals, he said, was “clearly not under discussion at this point anymore.” He also cited the practical aspect of the short-term vacation rental regulatory framework not planned to become effective until January 1, 2019. Other issues that he outlined included a concern that Olympia might allow the Washington State Convention Center to usurp taxing authority, how revenue should be collected and where it should be spent, and overall regulatory costs that might be created.

Many councilmembers disagreed with delaying action.

Councilmember Mike O’Brien responded by saying that he was ready to move forward and that councilmembers had been actively engaged in the process for months. Councilmember Kirsten Harris-Talley added that she didn’t think it was fair to keep people with financial interests in operating short-term vacation rentals in limbo any longer. She also cited the threat of displacement and expressed concern with not making good on promised investments in affordable housing.

Councilmember Kshama Sawant said that delay would be a burden for members of the public who would be forced to attend more meetings to ensure their opinions were heard. She also felt that the tax needed to be dedicated toward Equitable Development Initiative projects and enacted immediately so that it wouldn’t pit those projects with the needs of homeless in the city budget still under debate. Councilmember Lisa Herbold highlighted the timeline of the short-term vacation rental legislation, which first began in 2016 and was reintroduced earlier this year, as evidence that the city council has had ample time to consider the issues. She also said that there was an urgency to act now, particularly because of long-term affordable housing lost to short-term vacation rental conversions, and because she felt there was a majority of the city council ready to make decisions on the legislation.

Councilmember Johnson said that it was his preference to have the PLUZ Committee, either on Monday, November 27th or Monday, December 11th, take another crack at all three pieces of the short-term vacation rental legislation–the proposed re-referred regulatory framework and tax bills in addition to the land use and zoning bill. That would still allow time for further debate, modifications, and adoption before end of year.

In response, Councilmember Sawant argued that the regulatory framework and tax bills for short-term vacation rentals should be separated as agenda items thereby allowing the tax to be voted on at the city council meeting and separately considering whether the regulatory framework bill should be voted on or sent back to committee. Councilmember Sawant was successful in separating the two pieces of legislation on the agenda and wanted both to be voted on during the meeting. Council President Bruce Harrell then called for the question on whether to re-refer the regulatory framework bill to the PLUZ Committee. The motion passed on a 5-4 vote sending the bill back to committee. Then the city council moved to the question on whether the tax bill should as well. That motion failed on a 5-4 vote with Councilmember Debora Juarez being the swing vote indicating that she was ready to vote on the tax bill.

Amending and Adopting the Tax

Turning to the issue of the short-term vacation rental tax, Councilmember Johnson started his discussion on an amendment (Amendment 9) that would seek to expand intent language on how the city would monitor and work with other jurisdictions that may change or impose short-term vacation rental taxes. King County and the state already appeared in the bill, but Councilmember Johnson wanted to include language regarding the Washington State Convention Center that might seek to impose taxes.

A debate then ensued over the wisdom and necessity of acknowledging that the Washington State Convention Center might impose their own taxes and that spelling out city actions could end up tipping the city’s hand. Nevertheless, Councilmember Johnson was successful in getting the amendment adopted which goes as far to say that the city might enter into an interlocal agreement with another jurisdiction could be negotiated so that the city’s tax were effectively collected by another jurisdiction if they, too, chose to tax short-term vacation rentals. The overarching objective of that is to reduce regulatory hurdles and regulatory costs born by the city by having one consolidated manager of taxing.

Both sets of adjusted tax proposals were projected to increase yearly short-term vacation rentals over the $6 million baseline flat tax. Councilmember O’Brien noted that his amendment was projected to raise $1 million over the baseline flat tax and $700,000 more than Councilmember Johnson’s variation. His amendment would also send the first $5 million in net revenue to Equitable Development Initiative project, the next $2 million in net revenue to investments in affordable housing, and then any net revenue after that to Equitable Development Initiative projects–some of which may include affordable housing. Ultimately, the city council passed Councilmember O’Brien’s amendment on a 5-4 vote and then unanimously passed the full legislation as amended.

Still, the debate over how to regulate short-term vacation rentals will live on at least for a few more weeks when the PLUZ Committee takes back up debate on further policy changes.