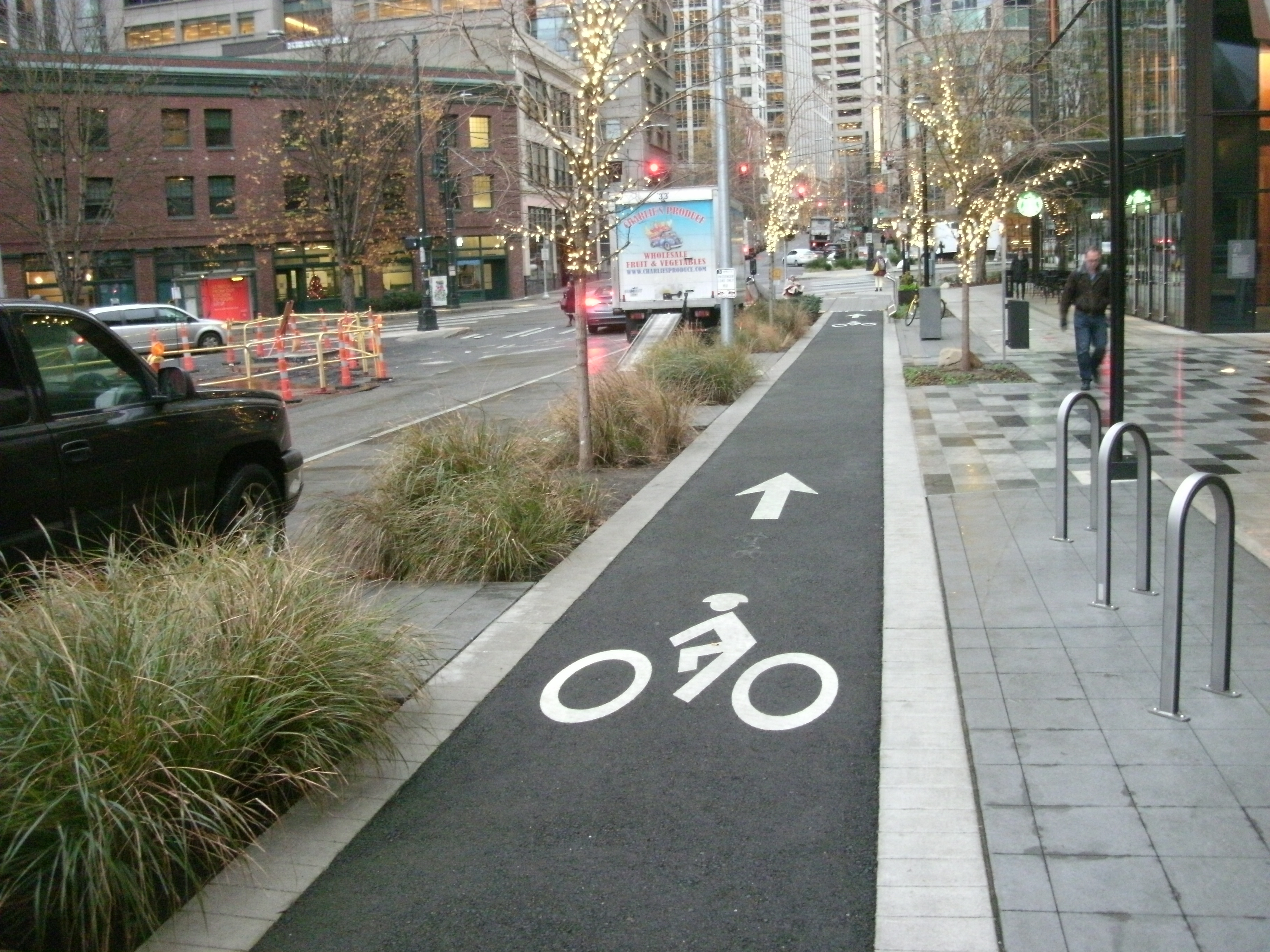 Beginning shortly after New Year’s Day, the Seattle Department of Transportation will begin working on a new segment of the Center City Bike Network, built upon a segment of bike lane already in place on Amazon’s campus. As early as January 2nd, work will begin to install a southbound protected bike lane between Westlake Avenue and Pike Street, converting a lane of traffic.

Seventh Avenue is currently a one-way street southbound between Westlake and Olive Way with two-way traffic south of Olive. Because taking a lane southbound between Olive Way and Pine Street would only leave one lane in each direction, crews will be converting the northbound lane on that block to a southbound lane, matching the rest of the northern segment of the street and “improving traffic flow”.

Along with a planned northbound protected bike lane on Eighth Avenue to follow, Seventh Avenue will provide connectivity along a gap in the network for people on bikes to get between Denny Triangle, South Lake Union, and points north. Facilities like the Westlake Cycletrack, the Dexter Avenue bike lanes, and the Mercer Street green lane all provide various levels of all ages and abilities routes in South Lake Union, but they aren’t connected, and routes to get downtown are still very limited.

The bike lane will not extend all the way south to Union St, though crews will be adding sharrows to the block between Pike Street and Union. Sharrows are not bike infrastructure.

Seventh Ave is home to two blocks of a high-quality southbound cycle track, which were built as part of Amazon’s “Rufus 2.0” complex. Constructing two blocks of bike infrastructure on Seventh Avenue and one on Blanchard Street was one of the many public benefits that Amazon agreed to provide in exchange for the right to build on city property, the three alley rights-of-way that are now part of the Amazon campus.

With the protected bike lane, improvements for pedestrians will come on Seventh Avenue in the form of curb bulbs at intersections shortening crossing distances and improved traffic signals, which should reduce conflicts between drivers, pedestrians, and people on bikes. Full cross-sections for all the streets and their proposed changes are below.

With the abrupt resignation of SDOT director Scott Kubly shortly before Christmas, the department is heading full steam ahead on bike infrastructure under a mayor who has so far been scant on the details of her transportation agenda. Traffic lights are slowly beginning to be turned on along the Second Avenue bike lane extension from Pike to Denny Way, with an official completion date of January likely. And a bike lane along Fourth Avenue, as part of the One Center City recommendations in conjunction with tweaks to bus service, are moving forward. A two-way facility there would put most of the basic bike network in place, which is remarkable considering that at the start of 2017 almost none of it was in place.