It isn’t news that there are gender disparities among people who bike. Reports estimate that women make up between 25-30% of bike commuters, and there’s even less data on trans, femme, and non-binary riders. Data from local advocacy organizations indicates that gender and race disparities persist in bike activism as well.

Research points to a wide variety of factors, from a lack of comfortable infrastructure, to harassment on the street, to poorly designed gear, clothing and accessories. Women often agree there are less measurable deterrents that make biking feel exclusive.

Back in March, Cascade Bicycle Club hosted a thought forum with several dozen women connected to the bike community to discuss these intangibles. The list that came forward ran the gamut:

The women also developed ideas about what makes biking inclusive:

Finally, the group developed a set of ideas to address these lists throughout bike month. Recognizing the need to change the culture around bicycling, and the idea of “who bikes,” a whole slough of organizations came together to organize these events focused on women/trans/femme-identified people that are interested in biking.

Throughout the month women/trans/femme leaders have led family-friendly rides, meet-ups, bike share events and more. It’s a small but important step in changing the perception of what using a bike is all about.

The Urbanist has teamed up with Cascade Bicycle Club and Seattle Neighborhood Greenways to host a final celebration of women and biking to conclude bike month. Join the Womxn’s Downtown Seattle Happy Hour–there’s an advocate in all of us! On Thursday, May 31, from 5 to 7pm at Elephant & Castle (1415 5th Ave.). This event was designed as a space for women, trans, femme and non-binary-identified people. Cis-gendered male friends, we’ll catch you at the next event!

While this event concludes another year of Bike Month activities, efforts for making biking a more inclusive and accessible option for women must continue. If you have ideas or want to get involved, check out resources below:

She Bikes by Cascade

Note of acknowledgement: The late SJ Brooks, founder of Friends on Bikes Seattle chapter, participated in the visioning of Womxn’s Bike Month events. We want to acknowledge their leadership and contributions to making biking more inclusive to women, trans, and non-binary folx.

SJ Brooks was a leader in making biking more accessible and inclusive to everyone in Seattle. and beyond. Sending my love to their family and all their loved ones. Their work will live on. 💜https://t.co/Qfi0Rqt6lT

Bike Everywhere Month: Exploring Our Region By Bike Has Never Been Easier! 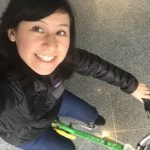 Kelsey grew up in the Seattle area and nurtured her love for cities (and walking, biking and transit) while living in the urban jungle of Chicago. Grounded in theories of public health and cultural anthropology, she sees urban policy and planning as a means to building healthier, more socially connected communities and puts this into practice daily as an active transportation advocate. Kelsey lives in Colombia City, less than a mile from her childhood home, with her husband, dog and many bicycles.