In my last installment, I pointed out the importance of sidewalks—that they exist and that they are continuous—both because they provide an opportunity for residents and visitors alike to get to know a city, and because they ensure that people who don’t or can’t drive get to where they need or want to be safely. But it’s also true that sidewalks have become a sort of dumping ground (literally and figuratively) for people in cities in which other iterations of public space have gone away.

Writing for City Lab, Laura Bliss makes the case that one reason sidewalks have become a convenient metaphor for what either ails or is working in US cities is because sidewalks are the little bit of public space that remains where all else is privatized. Where roads used to and could accommodate all sorts of mobility, now they prioritize private vehicles. Green spaces and plazas seem indulgent and not seen as assets in locales where housing is scarce or real estate is expensive; where there once might have been a park, now there’s parking, or another mixed-used development. Parks, without a tax-base willing to build or maintain them, fall into disuse or misuse: bathrooms are closed, fences go up, and then local residents complain about the homeless and unsheltered who occupy them.

In effect, there are simply fewer and fewer places for people to just be, writes Bliss.

As such, the sidewalk becomes a little bit of everything for everybody: people walk, jog, and stroll on it, sure, wait for the bus on it; in the absence of park benches, people will likely sit on it, too. A lack of bike lanes combined with high speed limits on roads also bring some cyclists onto the sidewalk; a dearth of public toilets is, likely, why some people conduct their business on the sidewalk. Where there are few if any shelters, the sidewalk provides some a place to sleep.

What’s so good about public space anyway? In an era where city planning has largely favored the whims and will of developers, this questions doesn’t seem as impertinent as it might have been in times before ours.

A democratic society such as ours likes to locate its roots in classical Greece. Our governmental institutions and state architecture and civics classes all harken back to what the Greeks were doing to shape society in the 5th and 4th centuries B.C.E. We seem to have forgotten that a cornerstone of the Greek experiment in public life was public space. Simply, there was no public life in classical Greece without public space.

The agora is where matters of living—living together in a configuration not unlike the modern city—were had out. The aesthetic, artistic, political, and spiritual happenings of the city-state where worked out in public space. Without it, private interests would trump common ones, ensuring that suspicion, distrust, resentment, and recrimination would undo the good life the classical Greeks were so intent on bringing about.

It seems odd (and perilous) that the inheritors of democratic society would now turn away from the very site and mechanism built and organized to make democracy possible in the first place. But, increasingly, cities in the U.S. seem intent on it.

In my walks around Tacoma, I’ve been paying attention to where and to what degree parks, plazas, and green spaces—places where I could just be—occur. Here’s what I’ve found: within a mile radius of my apartment, I have (walking) access to about 10 parks, plazas, or green spaces. In my neighborhood, many intersections are also landscaped or designed to encourage slowing down and just being.

These parks, plazas, and green spaces are all within a short walking distance from my apartment. There are others. Walking to them or by them at different times of day result in encounters with different sorts of Tacomans, from joggers to dog owners, to groundskeepers and parents with their children. At night, some of these spaces provide a place for some to sleep. I’ve seen people in Wright Park taking a mid-day stroll, others eat their lunches, while others read under a tree. It’s not uncommon to see multiple things happening in these public spaces all at once: kids playing in the splash pad over there, teens shooting hoops a few feet away, a man in his 20s training his dog to catch a frisbee, one person napping over there, and two people walking side-by-side caught up in conversation.

The Tacoma Mall Neighborhood Subarea Plan, which the city council adopted on May 15 of this year, makes parks and green spaces a key component of the redevelopment of this area.

Whereas the current Tacoma Mall neighborhood is served by one not particularly large park, the new plan calls for an increase in passive and active public spaces, including parks and plazas, and spaces for public art and community engagement. According to the plan, “The parks concept envisions a parks and open spaces in each district for residents of all ages to play and gather, and would enhance the overall neighborhood’s green character.”

The plan outlines a set of markers under the overarching goal “Community Vitality.” Public space seems key to this goal, as the plan outlines key steps to “Increase the presence of arts and cultural activities, engage community members from diverse backgrounds, build community relationships and foster a positive neighborhood identity.”

There are many ways to grow a city or revise past development. In many cases, city councils default to developers, letting them make important decisions about whether or not to make space for the public once the necessary permits have been dolled out. Developers don’t always see value in space that’s left open, in space that’s there to let people just be. And when they do allot some space for a park or a plaza, they erect both physical and symbolic boundaries that prohibit actual public use.

There are, of course, a bevy of reasons why public space has gone away in many places around the country. It’s not just local governments deferring to the whims of developers. In many cases, local governments have actively surrendered public space through sales, ordinances, or by making it so that roads are only accessible by operators of private vehicles.

Public space is essential to the democratic project. It’s in public space where we meet on purpose or coincidently with our neighbors and others who, like us, have a stake in how things go—locally, regionally, nationally.

In the absence of public space, a lot of pressure falls on sidewalks. No wonder these have become central to the debates on why cities work/don’t work. But it’s hard to ensure that everything that needs to happen in order for a vast collection of different people to cohabit and thrive happens when the only place they can do it is on a narrow strip of walkway running alongside streets and roads.

The sidewalk is where we stop to chat with someone we’ve not seen in a week or more; where we are approached by someone registering people to vote; where the handful of people waiting for the bus stand or sit as they read a book or scroll on their phones.

In an era threatened by a lack of public space, I am fortunate to have arrived in a city where, in my neighborhood certainly, I have multiple spaces nearby in which I can serendipitously meet others whom, despite our differences, share certain goals. It’s in these spaces where I expect I’ll come to know those around me as neighbors. Some may even become friends. 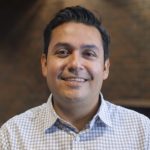