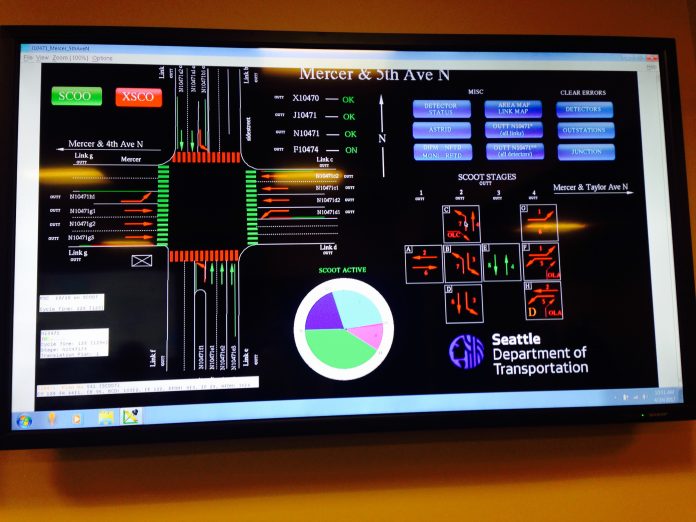 The mayor’s proposed budget, released on Monday, increases the yearly budget for the Seattle Department of Transportation (SDOT) by nearly $130 million for 2019 and $200 million in 2020, directing both unspent funds from previous years and those from new sources like increased fines from red light and school zone cameras toward completing transportation improvements promised to voters in the 2015 Move Seattle levy. But there’s one line item that is getting significant increases compared to the original Move Seattle plan: “Intelligent Transportation Systems” (ITS).

The mayor’s proposed budget would increase the budget for “Intelligent Transportation Systems” from $2.8 million this year to $4.5 million in 2019 and $6.8 million in 2020. These improvements include replacing the traffic signals at intersections, adding dynamic message boards to inform drivers of travel times, and in some cases upgrades to a full adaptive signal system. Adaptive signals have been installed on Mercer Street between Uptown and South Lake Union, and do a great job at prioritizing east-west travel for people in cars over most other modes, most notably pedestrians.

This big budget add comes directly on the heels of the city council’s approval of the Key Arena redevelopment plan, and some skepticism from the city council around how well adaptive signals would be able to handle mitigating the traffic impacts from a rebuilt arena with added professional sports events without being a disaster for pedestrians, transit riders, or cyclists.

On September 7th, at a meeting of the city council’s Select Committee on Civic Arenas, Councilmember Mike O’Brien questioned how well the adaptive signals that have been installed work for people walking: “It’s really good at picking up automobile movement, it’s okay at picking up bicycle movement, and it’s pretty nonexistent when picking up pedestrian movement…really what this does is it maximizes automobile throughput at the expense of pedestrians and other users.”

The response from Marshall Foster, working on the Key Arena redevelopment plan for the City of Seattle, was that the infrastructure is separate from the technology that operates on it, and that installing adaptive signals on Denny Way, Dexter Ave, and 1st Ave N was a priority for mitigating arena impacts.

Through a months long process of community involvement under the auspices of the “North Downtown Mobility Action Plan”, city staff have been compiling a ranked list of what the community views as priorities for transportation investment in Belltown, South Lake Union, and Uptown: the three neighborhoods most impacted by the new Key Arena and its transportation repercussions.

The number one project in the “vehicle” category in the vicinity of Key Arena is improvements to our existing adaptive signal system on Mercer Street, with the number two project being to upgrade the Denny Way corridor on the opposite side of Seattle Center with similar upgrades.

In other words, intelligent signal technology is being rolled out at a breakneck pace, citywide, and is set to dramatically increase under the mayor’s proposed transportation budget, and we don’t yet know how to ensure that it doesn’t negatively impact other modes. What is clear is that the investment itself is coming at the expense of investment in multimodal transportation options, for the most part.

On the other hand, improved traffic signals can play a big role in reducing collisions, which has an oversized impact on the safety of vulnerable users. But the improvements that the city has been making around its traffic signals do not appear to be prioritizing safety for users either. A signal that would protected left turns at one of the busiest intersections in the city for pedestrians was cancelled (with lack of funds as the cited reason) and many intersections in the center city are now being modified to provide dedicated turning phases to prioritize cars (often to get them out of a bus lane) but without the counterpart of a protected phase for pedestrians where there are not any turning vehicles entering the crosswalk.

With the prioritization of what exactly the improved signals are supposed to be doing as upside-down as it is, we should question whether an additional $11 million over two years is a worthy investment in a city that is making significant cuts to other transportation programs needed to blunt the impact of climate change and create a safe and vibrant city.