Seattle’s housing crisis is even worse than you think, and here’s the first step to fixing it.

Everyone knows Seattle has a housing crisis.  And yet for each solution proposed, whether it be MHA or backyard cottage legislation, there are those who disparage it, others who sue, and many more who just hope it won’t impact their lovely, quirky, old-Seattle neighborhoods. With all of this friction, production of housing, particularly of affordable homes, is mind-bogglingly slow and expensive. However, the recent very bad climate news may turn out to be just what we need to wake people up to the climate impacts of housing , and get them started on collaborating for the best possible quick action on housing.

Spoiler alert: readers who already understand the link between climate bad news and the need for a broader and deeper civic conversation about housing should skip to the final paragraph, which contains a specific invitation to join that conversation.

On October 8, the International Panel on Climate Change (IPCC) released a special report on the implications of a 2.7 F (1.5ºC) rise in global average temperature. It makes the need for immediate and “transformative” action abundantly clear — if we don’t hold warming to 1.5ºC, not the 2ºC target of the Paris accords, and not the targets of Seattle’s Climate plan (which we are presently failing to meet), we will see suffering and losses on an unprecedented and unimaginable (but scientifically well-understood) scale, as soon as 2040. The report is long, complex, and detailed in its climate impact projections as well as science-based policy recommendations. We will dig into many of these implications in future articles, but for now, suffice to say that the future depends on our city and others like it reaching net-zero greenhouse gas emissions by about 2030.

So, what does this mean for housing? Due to larger dwellings and few options other than driving, suburban carbon footprints are two to four times larger than those in dense, walkable urban areas–so meeting our climate goals requires an immediate halt to, and reversal of, urban sprawl. Each family displaced by housing costs puts us a step further away from meeting our regional emissions goals, and each family welcomed back as we build more, and more affordable, in-city housing, puts us a step in the right direction. A sustainable future requires us to build more and smaller homes, closer together, which will also make improved transit more economically rational, and will facilitate walking and cycling.

If we want to be a progressive city, we also have to think about welcoming climate refugees; drought in Central America, for example, has already been a big driver of migration. And as warming increases, the Northwest is likely to continue to be one of the most climate-stable places in the U.S.; unless we plan to pull up the drawbridges and have housing sprawl into the mountains, we should be planning for sustainable growth that supports existing residents as well as newcomers, improved transit, and vibrant local businesses.

To understand how we get where we want to be, we must understand, and talk about, how we got where we are, and the tensions that we now face. Seattle’s affordable housing crisis is the result of many factors, but prime among them is that when blatantly discriminatory policies and practices of the past (e.g. racially restrictive deed covenants) were outlawed, many neighborhoods fought change and integration by working for zoning laws designed to preserve single family neighborhoods. As the city grew rapidly, there was limited opportunity for housing to grow at the same rate. As Mike Eliason points out, multi-family housing had been legal throughout the city, but we now have “more area dedicated to golf courses than we have vacant or re-developable land for 6-story multifamily housing.” And with gentrification already a done deal in those few neighborhoods formerly allowed to communities of color, we require land use policies that begin to right these wrongs.

Seattle badly needs creative solutions, and some are in the works: the Council Resolution for community-driven affordable mixed-use housing on public land put forth by Teresa Mosqueda, was passed unanimously by the council. Plaza Roberto Maestas serves as a model for vibrant, community-focused development. Housing activists and electeds fighting for funding and mechanisms for affordable housing have shown ingenuity and endurance: the head tax, backyard cottage legislation (and the equity toolkit for its application), the Mercer Mega-Block campaign, to name a few. But each major victory has been delayed or denied by by those who fight to keep Seattle’s overwhelmingly predominant single family zoning safe from the encroachment of multi-family dwellings and affordable housing.  On the very day of this writing, the final EIS for the background cottage legislation was appealed by a community council in one of Seattle’s wealthiest and whitest single-family neighborhoods, on the grounds of ‘negative’ environmental impacts to local amenities such as parking.

In the face of the IPPC report and its implications, it’s high time that we reject the obstruction that seeks to perpetuate the exclusionary zoning of the past at the expense of our future. This doesn’t mean that neighborhoods cannot have a say — one neighborhood group that has embraced density, Aurora Licton Urban Village, has found that the city was more than willing to meet them halfway, with special legislation to ensure that their commercial corridor can smoothly begin the transition to the denser and more walkable future the neighborhood wants.

Seattle is a city of great wealth, that prides itself on being progressive and green: finding a way to house people affordably, attractively, and sustainably shouldn’t be rocket science. (Too bad those who could be investing in a resilient and humane future here instead are focusing on rocket science.)

What kind of city do we want Seattle to be? The climate crisis and the housing crisis can spur us to create a sustainable, vibrant, and equitable city well adapted to a future dominated by climate change–or we can dig in our heels and preserve the existing look of our neighborhoods, while driving out low- and middle-income people and continuing to rely on private vehicles as our mode of transport. Can we build a resilient, beautiful city that’s welcoming to all? Join the conversation on October 27 at a housing forum, “At Home In The World,” organized by 350 Seattle with the support of Town Hall Seattle and the City Neighborhood Fund.

If we are willing to take that first step of embracing and imagining change, and working through the inevitable conflicts and tensions in creative discussion, we can increase the odds of a future we can live with.

Barbara Bengtsson, originally from Germany, has lived in Seattle since the early nineties. A few years ago she woke up to the intersection of climate change with historic and systemic injustices. She has been part of 350 Seattle ever since.

Alice Lockhart cried her way through This Changes Everything in 2015 just in time for Shell No! She joined 350 Seattle shortly after that, and has since worked with 350 on numerous campaigns and in numerous roles. She presently works on 350’s transportation and housing teams. 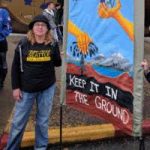 Alice Lockhart cried her way through This Changes Everything in 2015 just in time for Shell No! She joined 350 Seattle shortly after that, and has since worked with 350 on numerous campaigns and in numerous roles. She presently works on 350's transportation and housing teams.