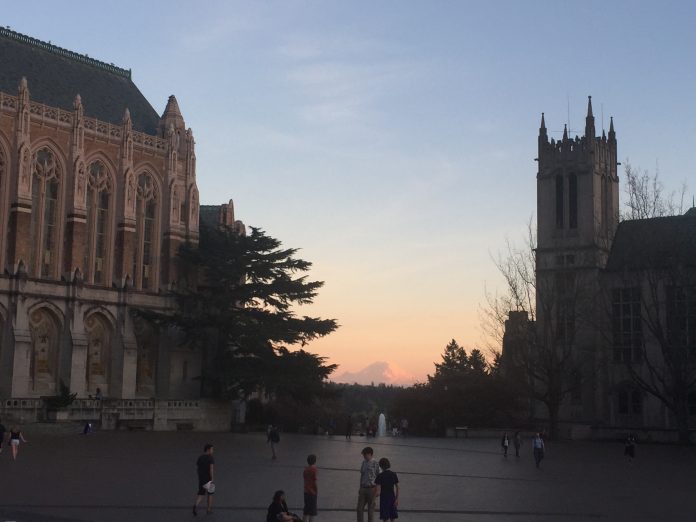 On Monday, the Seattle City Council approved an update to the University of Washington Campus Master Plan. The approval wraps up a two-year planning process that the University of Washington initiated to allow for future expansion of teaching, housing, and supportive facilities at the main campus in Seattle. The city council also approved very modest amendments to the city’s Comprehensive Plan, a long-range planning blueprint for policies on things like housing, transportation, and land use.

The long-awaited update to the University of Washington Campus Master Plan concluded during the city council meeting, paving the way for the university to add a further six million square feet of net new space for buildings on the main campus. Most of the new square footage will enable additional development in the West Campus and East Campus areas above and beyond the current building cap.

The bulk of the city hearing examiner’s recommendations were adopted by the city council. Responding to public input, however, city councilmembers worked through the committee process to identify further refinements to the master plan, which included further changes to conditions.

Throughout the public review process, community members and university staff raised significant concerns over transportation, affordable housing and childcare, and environmental impacts. The city council partially addressed some of these issues, but did not go as far to directly require free transit passes for all university staff, mandatory housing affordability payments for all new square footage, and adequate affordable childcare choices.

The reaction from members of the U District Alliance for Equity and Livability was mixed, but mostly positive on the adopted master plan.

“Today’s vote is a breakthrough for affordable housing in Seattle,” said Sharon Lee, Executive Director of the Low Income Housing Institute. “For the first time, a major low-wage Seattle employer will have to take some responsibility for their employees’ housing cost burdens.”

“The city’s transportation conditions on the UW plan are completely reasonable,” said Jesse Piedfort, Executive Director of the Sierra Club Washington Chapter. “These actions—reducing single-occupant vehicle (SOV) commuters, encouraging transit and bicycle trips—are necessary to mitigate the effects of growth on the nearby community and environment.”

“Without housing and transit assistance, the proposed UW expansion could push even more UW employees and families out of the city,” said Rhonda Johnson, a Patient Services Specialist at UW Medical Center and member of SEIU Local 925.

Prior to the city council vote, the Planning, Land Use, and Zoning Committee did make a suite of changes to the conditions of the master plan that the university will need to meet in order to take advantage of additional building rights. These include:

Each year, the city goes through a process to make minor amendments to the Comprehensive Plan. Two proposals were passed by the city council affecting the Land Use Element of the Comprehensive Plan, one removing land from the Ballard-Interbay Northend Manufacturing/Industrial Center (BINMIC) and another adjusting off-street parking policies. Several other items, however, were postponed from incorporation into the annual update due to community appeals of legislation. Revised policies supporting the proposed citywide Mandatory Housing Affordability (MHA) rezones and implementation of transportation impact fees failed to make it into the annual update.

Several groups (i.e., City Neighborhood Council, Wallingford Chamber of Commerce, and Wallingford Community Council) proposed changes to the Land Use Goal 6 (LU G6) that address off-street parking policies. Their proposal sought to amend the text of the policy as follows:

The Office of Planning and Community Development, however, recommended a slightly different approach to acknowledge the prior to reduce construction costs and thereby reduce housing costs while also increasing affordable housing. The city council adopted the following amendment:

Separately, the city council approved a material land use change for the BINMIC by removing approximately one square block of land from the special industrial and manufacturing area. The properties, however, will still retain an industrial future land use map designation. Seattle Pacific University sought the land use change off of W Nickerson St to facilitate future expansion of the university campus. Expansion of the university could be accomplished after an update to the governing campus master plan that would have to be approved by the city council. For now, the properties will still be subject to industrial and manufacturing policies and development regulations.