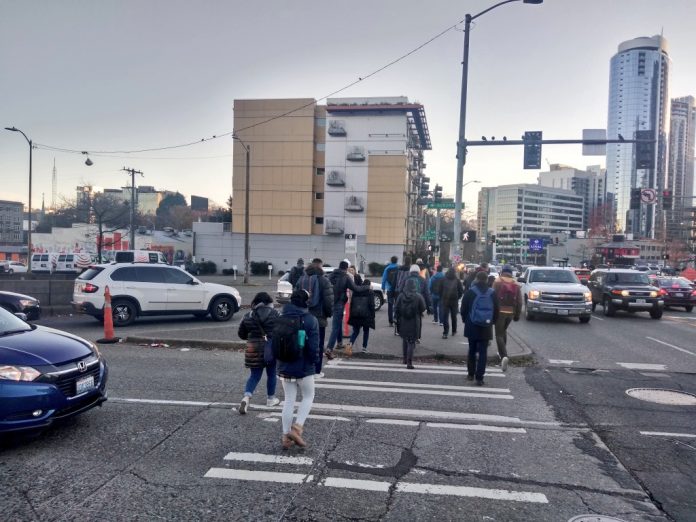 Seattle’s streets are not getting more traffic volume, and vehicle collisions on the citywide continue to decline, but it’s more dangerous to be walking on Seattle’s streets than at any time in recent history. That’s one of the big takeaways from Seattle’s 2017 traffic report, released this month.

For the third year in a row, over 500 people who were walking in Seattle were involved in a collision with a vehicle, with three in four of those people having an injury as a result of the incident. The 11 people walking that the Seattle Department of Transportation (SDOT) records as having died due to a traffic collision is the largest number since 2009, and the number of people that SDOT records as having been seriously injured (62) is at its highest level that at any point going back more than a decade.

A caveat: we know that SDOT’s serious injuries and fatalities are an undercount. A number of factors can lead to someone not being included in the yearly traffic report, including problems with SDOT coordinating with other agencies: a January 2017 fatality involving a pedestrian struck by a light rail train is one of the incidents left off this report. There are likely others.

The numbers indicate that SDOT’s Vision Zero program, launched in 2015, is not having a significant impact on keeping our most vulnerable street users safe. According to SDOT, the number of vehicles on our streets is staying constant, down 1% from the year before. Downtown streets are mostly at capacity, and transit ridership is still on the rise.

The number of total traffic collisions is also pretty constant, down from a huge peak in the middle of the last decade. 11,000 collisions over the span of a year, however, translates to 30 incidents per day that require police response and could result in people getting hurt. Stagnation is not the same as progress.

For those looking to explain the big increase in pedestrian collisions, SDOT has data on where the incidents occurred. A staggering 71% of pedestrian collisions in 2017 occurred in a crosswalk, either marked or unmarked, with six in ten happening in a marked crosswalk. This backs up the facts obtained in SDOT’s nine-year Bike and Pedestrian Safety Analysis that showed that pedestrian collisions are most likely to happen at intersections along arterials with traffic signals. In other words: pedestrians are just as likely to be injured doing everything exactly right.

With a large portion of pedestrian collisions occurring at signalized intersections, separating modes while crossing streets is paramount, but SDOT has been reluctant to fully separate crossing phases for pedestrians from turning traffic, instead preferring to maintain a dedicated phase for vehicles to turn but still allow turning vehicles on a yield. This leaves little room for driver error.

Where collisions occurred follows trends from previous years, with the most street fatalities occurring downtown, where pedestrian and vehicle volumes are high, and in Southeast Seattle, where streets like Martin Luther King Jr Way and Rainier Avenue are not built to allow vulnerable users to easily navigate them. District 2 in SE Seattle sees a hugely disproportionate number of traffic injuries compared to its share of the population.

This yearly report is currently the only venue for Seattle residents to read about the impact of our city’s streets on the direct health and safety of the people who use them. The Move Seattle levy performance metric dashboard had previously included biannual updates to serious injuries and fatalities, tying progress on our Vision Zero goals directly to levy spending. Last week, the dashboard has been updated to only include 2018 info on levy targets and traffic safety statistics were removed entirely from the website: a step backward for transparency around traffic safety.

As SDOT prepares to solidify its workplan, the outcomes of the millions of dollars spent over the life of the levy should be directly judged by the impact they are having on making our city a safer, more equitable place. It’s crucial that we look these facts when deciding how to move forward with improving our transportation system, recognizing that we are not on track and demanding that elected leadership show a way forward.