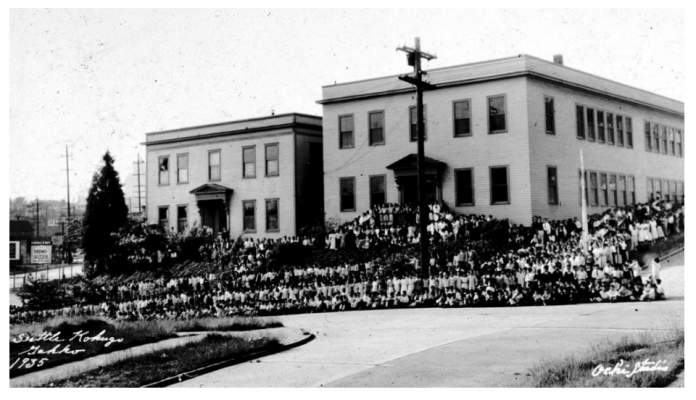 On Monday, the Seattle City Council formally registered three more historic structures to the city landmarks register. The suite of new landmarks include a Japanese language school in the Atlantic neighborhood, an old canoe house on the University of Washington campus, and a former lodging facility for nurses in Queen Anne. The city council also voted to turn down $12 million in outside money and a $25 million loan. Passing the package would have accepted grants and loans from local, nonprofit, state, and federal agencies–including $90,000 from the United States Immigration and Customs Enforcement (ICE), which is what tripped up the bill.

The City Budget Office is sending out an SOS Councilmember Sally Bagshaw said, and it appears the pleas succeeded as the city council has called a special meeting this Wednesday at noon, apparently to correct the budget snafu by passing the expected funding before the new year.

The city council seemed to surprise even itself in rejecting the $12.2 million in funding from public agency and non-profit partners. Councilmembers Lorena Gonzalez and Lisa Herbold voted no on principle (not wanting the ICE money) and because three councilmembers–Debora Juarez, Kshama Sawant and Teresa Mosqueda–were absent, the four “yes” votes were not enough to carry the bill, which requires five votes. ICE has been maligned for its brutal tactics enforcing immigration laws–and often acting outside the law in its zeal to punish migrants. A single line-item in the funding bill would have reimbursed the Seattle Police Department (SPD) for $90,085 in overtime costs. According to the bill, the overtime costs were specifically “associated with conducting investigations related to narcotics, money, and other contraband at ports and borders.”

$12.1 million in grants from local, state, and federal agencies would have been dedicated to a host of programs like home repair services for senior veterans, restoration of the Georgetown Steam Plant, fire prevention efforts, combating human trafficking, and improving the Duwamish Waterway Park. Another $25 million would have come in the form of a subsidized loan from the Washington State Department of Ecology for design costs related to the Ship Canal Water Quality Project that Seattle Public Utilities is managing.

The Seattle Japanese Language School (1414 S Weller St) received designation by the Landmarks Preservation Board over a decade ago, but only recently completed the negotiation process for the imposition of preservation controls and incentives. The structures were built from 1912 to 1929 and designed by several architects, including Japanese-American designers; the project is the first professional commission for Kichio Allen Arai, who is recognized as Seattle’s first Asian American architect to design buildings under his own name. Designation of the buildings and their site was on the basis of association with cultural heritage and historic significance of the Japanese-American community in Seattle. The three buildings are all of wood-frame construction in American architectural styles.

The University of Washington Canoe House/ASUW Shell House (3655 Walla Walla Rd NE) has been registered as a new city landmark on the university campus. Patrons of the university’s waterfront activity center may be familiar with the lofty wood structure, which is noticeable from the water’s edge on the Montlake Cut. The structure was build in 1918 and designed by L.E. Gregory, an engineer, and the Puget Sound Navy Yard. Originally, the structure was built to support the on-campus naval training station during World War I as an aircraft hangar. Eventually it was decommissioned and passed onto the university for rowing club use.

The building received designation from Landmarks Preservation Board earlier this year on five landmarking criteria. Preservation controls apply to entire building exterior, interior building volume and roof trusswork, and a portion of the site around the building perimeter (approximately 20 feet from the building). The building is eligible for several incentives.

The former Francis Skinner Edris Nurses Home (2120 1st Ave N) on Queen Anne received designation from the Landmarks Preservation Board earlier this spring due to its unique architectural characteristics and its association with the nurses who lived in the building originally. The building is a four-story brick multifamily structure designed in the Colonial Revival style, which drew upon common Georgian architecture of the 19th century. The revival style was embodied in the building constructed in 1923 and designed by architect A. H. Albertson.

The newly landmarked building was purpose-built for nurses of the Children’s Orthopedic Hospital. Typically, theses nurses were young single women and the home provided them an affordable place to stay so that they could serve the hospital. Now the building serves as office space and houses the American Cancer Society. The site is currently zone Lowrise 2 (LR2) and proposed to be zoned to LR2 (M) under the MHA Program, meaning that there could be increased development capacity for the site if the rezone passes. Preservation controls apply to the building exterior and part of the site.