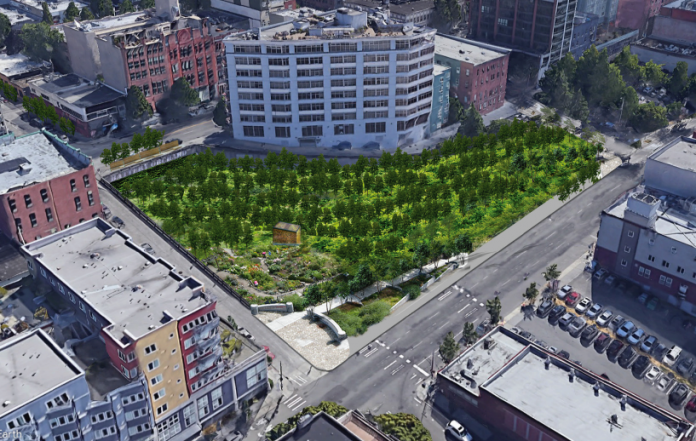 Recharge the Battery is working hard to ensure that the Battery Street Tunnel sites are transformed into much needed green space for Belltown.

As the clock ticks down on the removal of the Alaskan Viaduct and decommissioning of Battery Street Tunnel, Recharge the Battery is pushing forward with its vision of a greener future for Battery Street.

The campaign has not let setbacks, such as the City Council’s decision to fill the tunnel with debris from the Viaduct or the uncertainty that hangs over the future of Battery Street surface sites, thwart its efforts.

“This is Belltown’s chance to get a much needed green space,” said Aaron Asis, one of the founders of Recharge the Battery. “We can’t afford to lose this opportunity.”

When it comes to the Battery Street Tunnel, Asis’s greatest fear is that the Washington State Department of Transportation (WSDOT) will leave the West Portal site at 1st Avenue in a condition that will make it difficult to repurpose the space later. As a result, he has been in conversation with WSDOT, the Seattle Department of Transportation (SDOT), and the City of Seattle about the need for interdepartmental collaboration to ensure a better future for Battery Street.

Recharge the Battery’s work has not gone unnoticed. A Statement of Legislative Intent (SLI) sponsored by Councilmember Sally Bagshaw aimed providing greater certainty for the Battery Street’s future will go before the city council in late March. The SLI calls for SDOT, in collaboration with the Office of the Waterfront, to submit a report on planning for the use of the Battery Street surface street right-of-way (ROW) and the West Portal site after the completion of the Battery Street Tunnel decommissioning.

Decisions made now will have a critical impact on future projects. One example is how the tunnel is filled in. Depending on how that process is completed, there may be no opportunity to plant street trees on Battery Street in the future. This is because the trees’ root systems will require soil beds. If the tunnel is entirely filled with Viaduct rubble, there will be no space to accommodate trees.

Ideally Recharge the Battery would like to see green stormwater infrastructure, like rain gardens, bioswales, and permeable tree pits integrated throughout the street, providing biofiltration that would compliment the nearby Growing Vine Street urban watershed. However, creating the conditions for necessary for green stormwater infrastructure requires planning and investment.

Arborist and Seattle Urban Forestry Commission member Stuart Niven thinks that Battery Street may have a built in solution. The same vents in the sidewalk which have long contributed to the uncomfortable pedestrian environment could provide space for tree pits.

“Having spoken to the commission, filling in the tunnel completely seems like the cheaper and easier option,” Niven said. “Framing out sections where soil and planting material can be inserted is more expensive, but there is no structural reason why it would not be possible. With all those ventilation grates, they would have preplanned holes.”

Niven would prefer to see street trees planted into the ground, but he does concede that even if the tunnel is filled in entirely it would still be possible to add greenery to the street through the addition of raised boxes.

“It’s a bit restrictive on the type and size of tree, but I’ve seen plenty of large planting boxes with reasonably sized trees that provide benefits,” Niven said, adding his biggest priority for the project is expanding the tree canopy of Seattle’s downtown core. According to Seattle’s 2016 tree canopy assessment, downtown currently has less than 1% of the city’s tree canopy.

Creating an Urban Community Green in the Heart of Belltown

Recharge the Battery has also released design concepts for the West Portal site which feature an urban orchard and p-patch.

“We want the land to be really well-used by the community,” Asis said. “And an orchard similar to the Beacon Hill Food Forest but in a much more urban location would provide both green space and fresh produce.”

Because of the site’s southwest exposure, Niven believes it will be an excellent location to cultivate fruit bearing trees and other vegetables and fruit. “You could even grow grape vines there,” he said.

According to a one pager released by Recharge the Battery, key highlights of the proposed Battery Orchard & P-Patch include:

In recognition that any future project at the West Portal site will take time to complete, Recharge the Battery has proposed installing a “grandstand” on 1st Avenue overlooking the site. The concept is for community members to use the grandstand seating to watch the changes unfold over Battery Street as the tunnel is decommissioned and filled in. During this interim period, Recharge the Battery is encouraging community members to conceive their own ideas for the future West Portal site and share their feedback on the ideas proposed so far. Although the grandstand would initially be viewed as a temporary installation, it could eventually become a permanent feature of the West Portal site.